Man released from hospital stabbed wife before taking his own life

A father suffering from mental health problems posted a chilling message to Facebook branding his wife ‘the Devil’ just hours before he murdered her.

Stephen Arnold was released from the Dianna, Princess of Wales Hospital, and his family’s pleas for help from medics were ignored, an inquest at Cleethorpes Town Hall heard..

But tragically less than 24 hours later, Mr Arnold published a chilling post to Facebook branding his partner Karen the ‘Devil’ and said he was feared everyone was trying to kill him.

His daughter was alerted to the post and went in to check on the couple in the middle of the night when she discovered her step-mother had been stabbed to death while Mr Arnold had also died from self-inflicted wounds.

Mr Arnold’s daughter, Leanne, who was staying overnight to care for her father, told the hearing she ran upstairs as soon she got a phone call from relatives to alert her about the Facebook post.

Leanne said she had taken knives out of the kitchen because of the risk they posed when her father came out of hospital.

The two-day inquest heard Mr Arnold was discovered lying in the bed upstairs next to his wife. 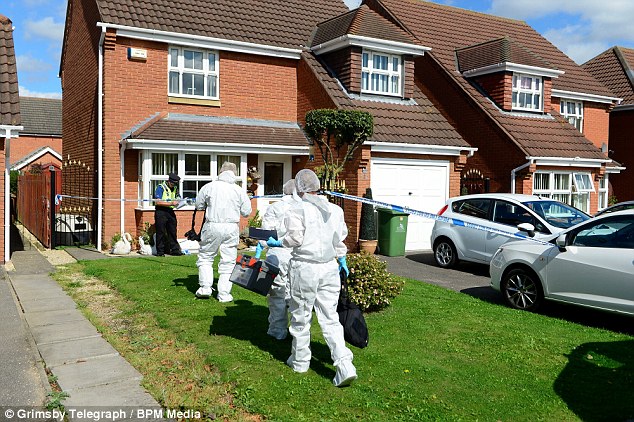 Pictured: The detached family home in New Waltham, Lincolnshire, cordoned off on September 7, 2016, after Arnold stabbed his wife and himself to death

Mr Arnold died from multiple wounds to his left forearm caused by a knife found at the scene, the pathologist revealed.

Detective Constable Stephen Jewell told the inquest, following a major incident investigation, it was concluded Mr Arnold had stabbed his wife repeatedly and then killed himself.

A timeline of events leading to the tragedy was compiled by Detective Constable Paula Barden.

Mr Arnold began work for Shoreline in 2008 working as a caretaker. He had issues with other staff members and had ‘taken exception to be called volatile.’

Detective Constable Barden said: ‘He believed he was being bullied by colleagues and management.’ He resigned in August 2015. In October he took up a new job as caretaker at South Parade Academy in Grimsby.

Mr Arnold told his mother, Margaret Snow, he believed the classrooms were bugged.

His mother told police he later became convinced his home was bugged and there was something in the Xbox and video player. He put tape over the cameras on his Ipad. He was also paranoid that something had been planted in the alarm box of their home, as it had fallen of the wall twice. He also thought neighbours were poisoning his dog.

His devastated daughter Leanne shared another side of Mr Arnold to the coroner. She described her father as a popular man who used to be the guitarist in a local band called the Ultrabeats.

She said he was ‘loveable guy’ and a good father and a proud man. She had tried to get mental health advice in the days before the tragedy.

‘The stuff he was coming out with was like he was hallucinating.’

‘He got paranoid because we were getting concerned,’ she told the hearing.

He was due to start a new job with North East Lincolnshire Council on September 12.

On September 2, daughter Leanne contacted support group Open Minds to get leaflets due to his depression and anxieties.

On September 4 he took an overdose of tablets and cider and was admitted to hospital. 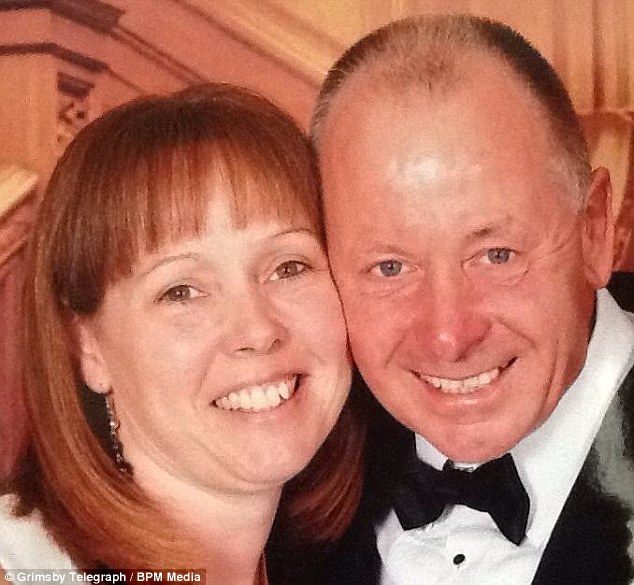 In happier times: The couple met in 1995 and they moved in together between 2003 and 2004 before marring in September a year later

He told staff he was depressed after finishing work in May. Two nurses from Diana, Princess of Wales Hospital told how they cared for Mr Arnold after he was admitted for taking an overdose.

Nurse Joanne Norfolk said Mr Arnold was assessed by a consultant who agreed, following discussions with mental health support workers, that he could go home on the evening of September 5.

An appointment with the mental health crisis team had been arranged for the following morning.

‘He was pleased he could go home, she said, adding that a first interview with Mr Arnold had not succeeded. But later that day ‘he seemed remorseful for what he had done and what he had put her (Karen) through.’

Staff Nurse Donna Irving told how Mr Arnold had wanted to have his infusion drip removed so he could go to a hospital cafe with his family. Hospital records referred to him believing the cannula was a lie detector. But the nurse persuaded him to keep it attached. She told the inquest how later ‘he was apologetic for what he had done.’

Nurse Irving said ‘He kept shaking my hand and hugging the doctors. He seemed remorseful for what he had done.’ She said the mental health team told her that if he was ‘stable and medically fit’ he could return home and be seen the following morning ‘in the community.’

Nurse Irving said ‘I did not have any concerns about his welfare.’ Hospital records showed Mr Arnold’s family tried to convince him to stay in hospital.

From records it was revealed that an assessment was conducted by Crisis Team worker Joshua Fletcher.

Paperwork said: ‘Stephen was closed to questioning and deflected the questions or stated he was unwilling to discuss things as it is confidential.’

He told staff he would not overdose again as his ‘family meant everything to him.

Doctors agreed Mr Arnold was ‘not detainable and has the capacity to make a decision regarding self discharge.’

Representatives of The Crisis Team were scheduled to interview Mr Arnold.

Nursing staff were told the patient could be seen at Harrison House that evening or in the morning at home if he was stable.

Daughter Leanne contacted the Crisis Team to ask for support. She was told someone would call her back but no one did, the inquest heard.

Hospital records showed that ‘Chris Knight from Crisis Team was happy to see the patient tomorrow and patient to be discharged home.’

From records of mental health service Navigo, it was revealed the Crisis Team member was satisfied the patient could go home ‘as he would be with his wife and she would ensure he attended the following day.’

The record stated: ‘There were no identifiable risk factors reported by the doctor and so a joint decision was agreed upon that Stephen would go home.’

Mrs Arnold was happy with the plan, according to hospital records.

When he got home Mr Arnold played on his guitar. But he was anxious he would not get another job because of prospective employers would see his hospital records.

After discovering the bodies of her father and step mother, Leanne called 999. PCs Alcock and Doust arrived and alerted the ambulance service.

The inquest resumes today with Grimsby and North Lincolnshire coroner, Paul Kelly presiding and will hear from one of the authors of a joint report from Northern Lincolnshire and Goole hospitals Trust and Navigo, Professor Zaffer Iqbal.

For confidential support call the Samaritans on 116123 or visit a local Samaritans branch, see samaritans.org for details.