A man has revealed how he has spent the last 17 years fighting skin cancer – and getting his ‘dodgy looking mole’ checked sooner could have prevented him from more than a decade of excruciating pain and countless invasive surgeries.

If Jason Sprott, 48, could he would go back to 2003 – before he ever got diagnosed with skin cancer – and tell his younger self to get the mole on the back of his neck checked.

‘I was being ignorant and didn’t take it seriously enough, if I could go back I would get it taken out as soon as I saw a change,’ he told Daily Mail Australia.

Jason Sprott, pictured before his cancer diagnosis – when he worked in hospitality

Early detection is key, which is why Mr Sprott has decided to tell his story, in the hope it stops the deadly disease from ruining someone else’s life.

‘Now I check myself constantly, but back then I didn’t feel like I was in the demographic for melanoma,’ he said.

‘I had worked in hospitality for years, very rarely went in the sun and I was fit and healthy.’

He finally decided to get the mole checked out at the behest of his partner at the time but says it took him ‘four months too long’.

The mole was taken out and even caused confusion at the lab – with pathology divided over whether it was cancer or not.

A final verdict was made after sending the sample to a specialist. 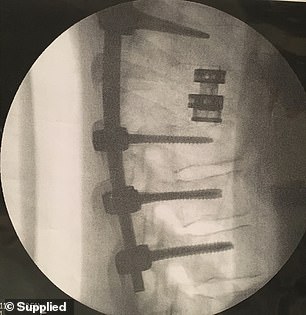 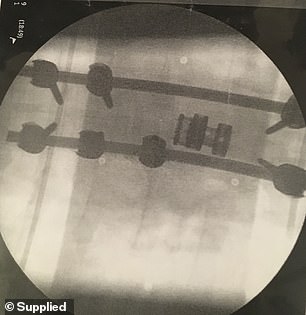 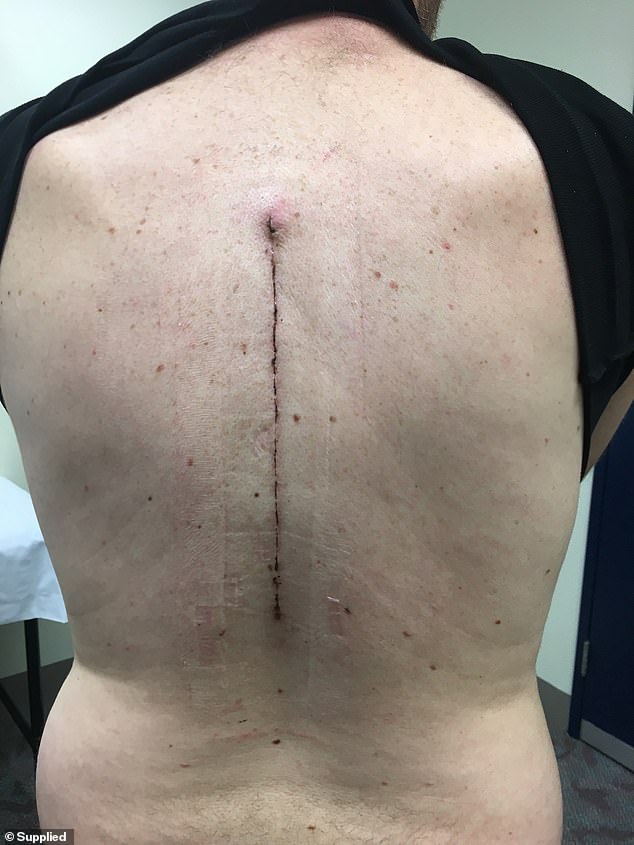 WHAT WERE THE WARNING SIGNS?

The mole – 2004 – The dodgy-looking mole on the back of Jason’s neck. The centre of the mole went black, indicating something wasn’t right.

The mole had always been there, he got it checked four months after noticing it had changed colour.

The spine – 2016 – For weeks he felt like he was lying on a marble when he lay directly on his back.

This pain became worse over time, but went away when there was no direct pressure.

The pain then became constant and was around his side and under his ribs.

He then found he was getting short of breath and went to the hospital.

Stomach and intestine – 2017 – There were no symptoms at all. The cancerous tumours were picked up after blood levels came back unusual.

Brain – 2017 – There were no symptoms for this either – routine testing also picked up on these. They were removed in February, 2019.

After the mole removal Mr Sprott thought he was in the clear and his life kept ticking along as it had before – except with regular skin checks.

But in 2016 the cancer returned – and this time it changed his life forever – stripping him of his ability to work and marking the beginning of a scary and painful chapter of his life.

‘I started getting pain in my spine every time I lay on my back – it was kind of like I was lying on a marble,’ he said.

He just started lying on his side instead but within weeks he started to feel short of breath and had bad pain across his side and to the front of his rib cage.

‘One weekend I was in so much pain that I couldn’t breathe so I went to the GP and was taken straight to the hospital and diagnosed with terminal illness,’ he said. 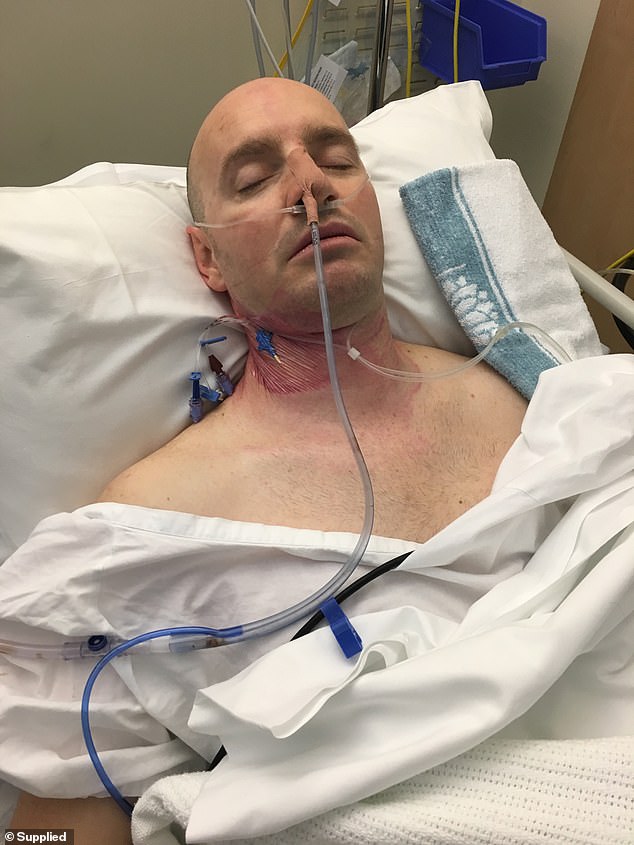 WHEN AND HOW DO I CHECK MY SKIN?

Check your entire body, in a room with good lighting, and if you notice any changes book an appointment with your GP.

It is important to check on to soles of your feet, between your toes and under your finger nails.

You should also look at places like your scalp and armpits. If you can’t see an area then it is important to ask for help.

This is the deadliest form of skin cancer and if left untreated can spread. It can appear as a new or existing spot that changes in colour, size or shape.

It can appear on skin not normally exposed to the sun.

This grows quickly and is raised and even in colour they can be red, pink, brown or black.

They are firm to touch and often bleed or crust.

This is the most common, least dangerous form. they can be red, pale or pearly and appear as a lump or dry scaly area.

It may ulcerate or fail to heal completely.

Grows in areas exposed to the sun and mostly on people over the age of 50.  It appears as a red scaly spot which might bleed easily or ulcerate or crust.

‘The cancer had traveled through my blood stream and embedded on my spine, then it grew tentacles which wrapped around my spinal cord.’

They did ‘every test imaginable’ and found a spot in his spine which indicated he had melanoma, this was concerned by a biopsy.

‘That was the most painful thing that has I have ever been through, that biopsy,’ he said.

Weeks later his t7 vertebrae and half of his t8 vertebrae was removed and a cage was put in his back to fuse his spine together. 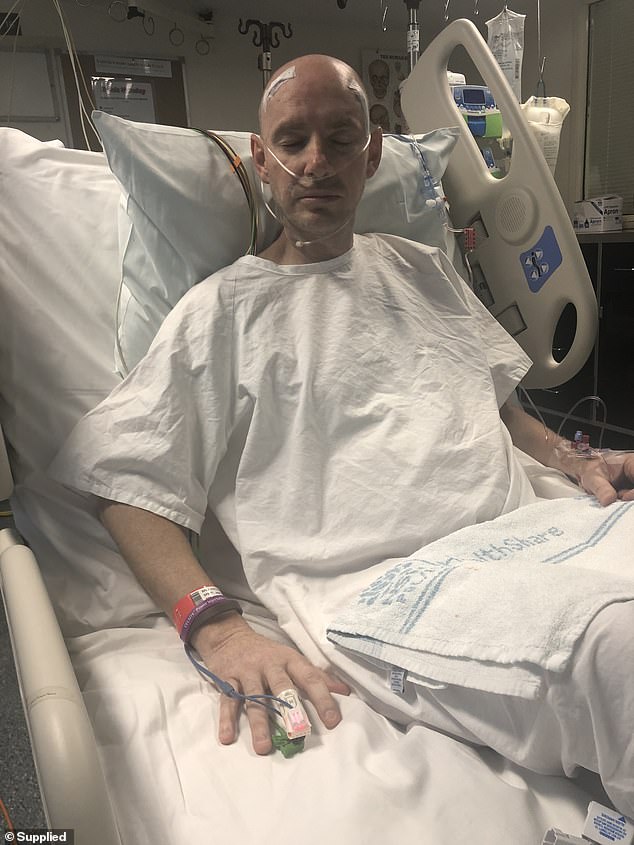 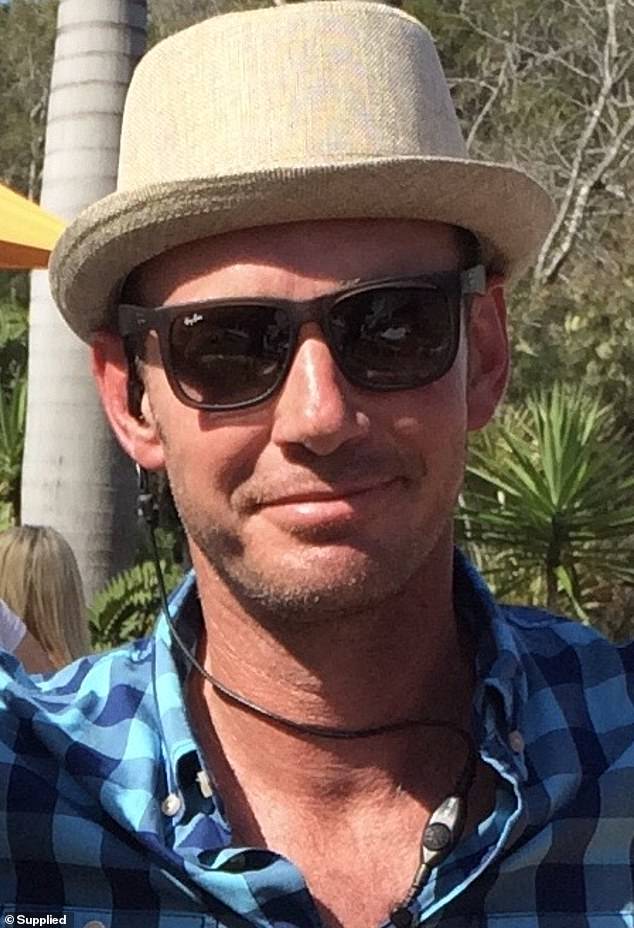 Because of this he can’t lie on his back and has only been swimming once because it is so uncomfortable.

He is also on permanent pain killers but says he is ‘happy to live with a bit of pain’.

In April 2017 routine blood tests picked up indicators for cancer. This time they found an ulcerated tumour at the top of his stomach.

‘I had no other symptoms,’ he said.

When they went into remove the tumour they also found one in his intestine and had to remove three centimetres of his small intestine.

But doctors had to give him immunotherapy tablets and allow the tumours to grow so they would be big enough to remove.

This took over 12 months. 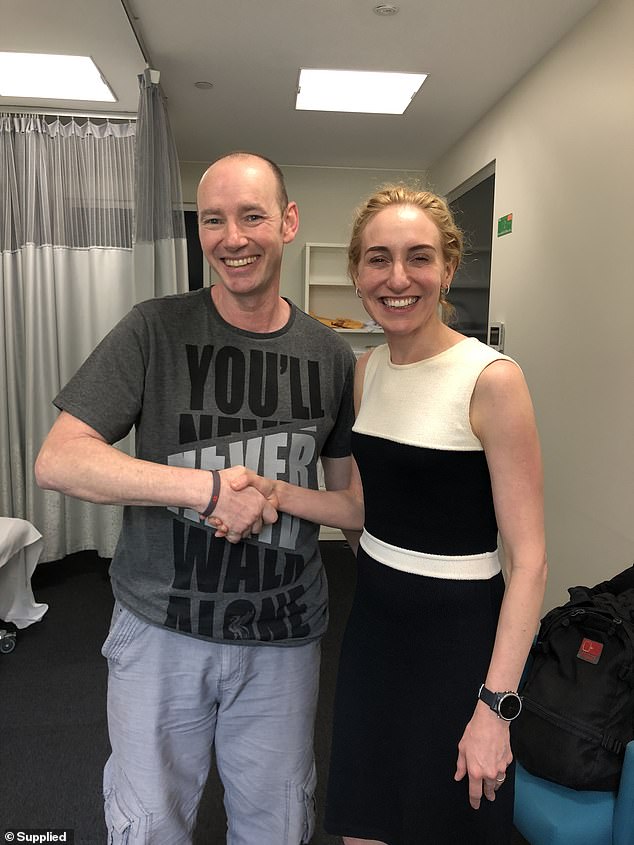 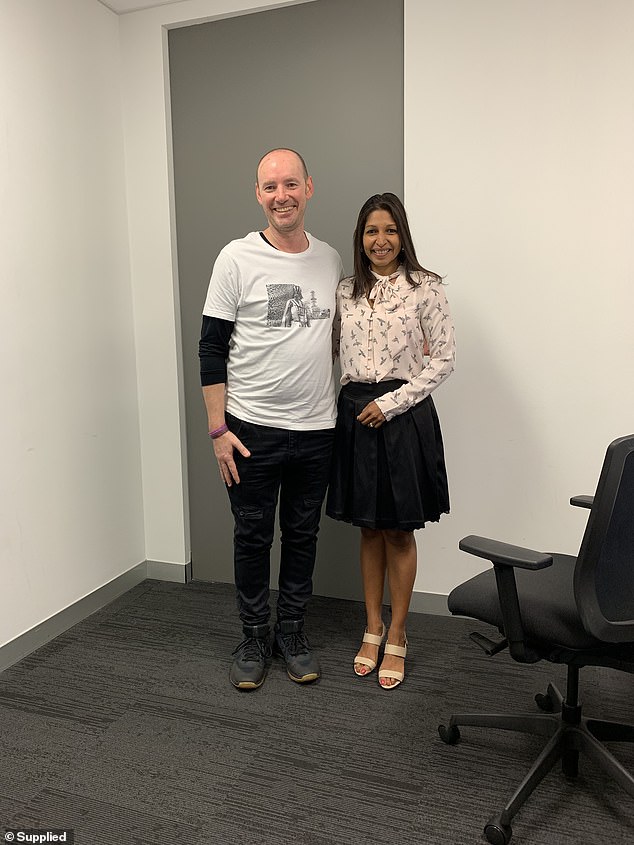 He has now been two years of immunotherapy which has given him arthritis and stiff joints – but he says he still looks on the bright side of life.

‘It could have been worse and at the end of the day I am still here,’ he said.

And now he is finally cancer free.

‘The only frustrating thing is that you have to be quite bad to get the immunotherapy, but if I had been able to access it earlier I might not have avoided some of the tumours,’ he said.

Mr Sprott can’t work a normal job and is currently on a disability pension after the cancer ravaged his body.

He has changed his lifestyle and can’t spend too much time socialising without becoming exhausted.

But with the time and money and energy he does have he now runs a charity ‘Mates Against Melanoma’.

He was able to access some of his super as well as a disability payout from insurance and poured that money into the charity.

He wants to raise money for early detection, to help people access medications and to reduce long term melanoma rates within the next decade.

Mr Sprott gave a special mention to his GP who he says ‘saved his life twice’ because he was so vigilant.

‘I wish all GPs were like mine,’ he said.

HOW HAS HIS LIFE CHANGED SINCE HE GOT CANCER?

Has a fused spine

Is in pain every day

Has to have blood checked often

Has to take pain killers daily

Can’t lay on his side