A South Carolina man has detailed how his ex-wife secretly poisoned him by putting arsenic in his protein powder, causing him to experience intestinal issues, joint pain, and dramatic weight loss of nearly 70 lbs. in a matter of months.

J.D. McCabe, 56, tells DailyMail.com that he spent 17 years happily married to his now ex-wife, Erin, raising their two children together in a loving environment.

But things took a staggering turn when Erin began abruptly accusing McCabe of cheating, abusing drugs and alcohol, and being mentally ill, turning their once-happy home into one plagued by gaslighting and mistrust.

As their marriage crumbled, McCabe began a simple workout regimen but was shocked to lose so much weight so quickly, dropping the first 30 lbs. in just six weeks.

After several doctors’ appointments, McCabe learned that he had been chronically exposed to arsenic — which he realized Erin had slipped into his protein powder.

J.D. McCabe, 56, tells DailyMail.com about how his once-happy marriage turned toxic – literally – when he says his ex-wife poisoned him with arsenic in his protein powder 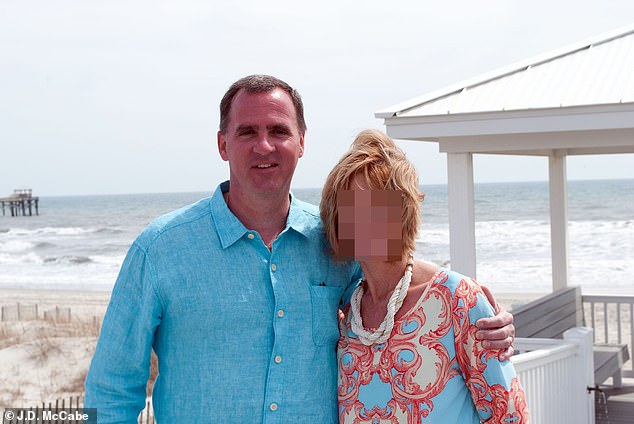 He was happily married to his ex-wife and raised two kids with her – but her behavior changed 17 years into the marriage, becoming hostile

McCabe recounts his extraordinary story in his book, ‘The Third Gift: My Dance With The Devil (And Her Mother),’ and has recently gone viral on TikTok sharing some of the most remarkable details.

He and Erin met in the early ’90s when McCabe was playing shortstop in a slow-pitch softball league and was introduced to Erin by the third basemen’s wife after a game.

They dated for about a year and a half before getting engaged and tied the knot on September 11, 1993.

For nearly two decades, McCabe says they were ‘happily married,’ welcoming a son who is now 26 and a daughter who is now 22.

His daughter had once described them as ‘teenagers in love.’

But around the 17-year mark, McCabe says that Erin began making ‘subtle accusations’ against him. She’d demand to read his emails and check his phone, and after coming home from a therapy appointment, she told him: ‘My therapist thinks that you’re cheating on me.’

She didn’t just accuse him of infidelity. Erin would also suggest that he was addicted to pornography, doing drugs, and drinking too much.

On one occasion, he says, Erin came home from having dinner with a friend and smelled beer on McCabe’s breath — and immediately ‘went ballistic.’ 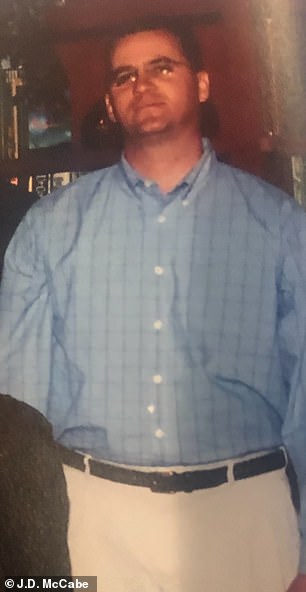 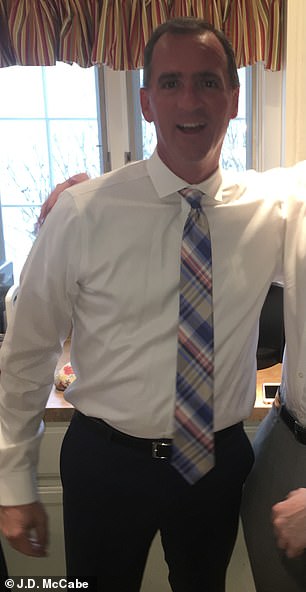 As their marriage started to crumble, McCabe began working out for an hour three days a week and using protein powder. He lost a dramatic 30 lbs. in six weeks

What is arsenic poisoning?

Arsenic is naturally found in the earth and can be found in the air, in water, and in land. But it can be highly toxic in its inorganic form, and prolonged exposure or high levels of exposure— like through contaminated food or water — can cause dangerous side effects.

According to the World Health Organization, immediate side effects of acute arsenic poisoning include vomiting, abdominal pain, diarrhea, muscle cramping, and numbness and tingling in the extremities.

Though McCabe was caught off-guard by the shift in their relationship, he was also understanding, excusing her erratic behavior as a symptom of a medical condition that she had claimed to have for years.

‘Her mood changed and her hostility was ever-increasing, but I chalked it up to her autoimmune disease,’ he says.

But what McCabe couldn’t have imagined was that Erin wouldn’t stop at just making outlandish accusations — she would also allegedly escalate to secretly poisoning him.

McCabe was heavyset when he decided to improve his health and start exercising.

He went to the gym three days a week to lift weights for about an hour, and also began taking protein powder on the advice of his son.

Those changes could certainly lead to weight loss, but McCabe began shedding pounds much faster than he expected, and in just six weeks, he’d already taken off 30 lbs.

In retrospect, he says his wife must have been the only one who knew why — and she seemed to enjoy her secret.

‘When the weight started coming off, she would mock me,’ he recalls. ‘She would pull the protein powder out and say, “I know you’re putting something in your protein powder, I just know it.”‘

McCabe says he lost about 65 to 70 lbs. in a matter of months — an amount so dramatic that colleagues were convinced he was seriously ill.

‘People at work said they thought I was dying of cancer but didn’t know me well enough to ask,’ he says. 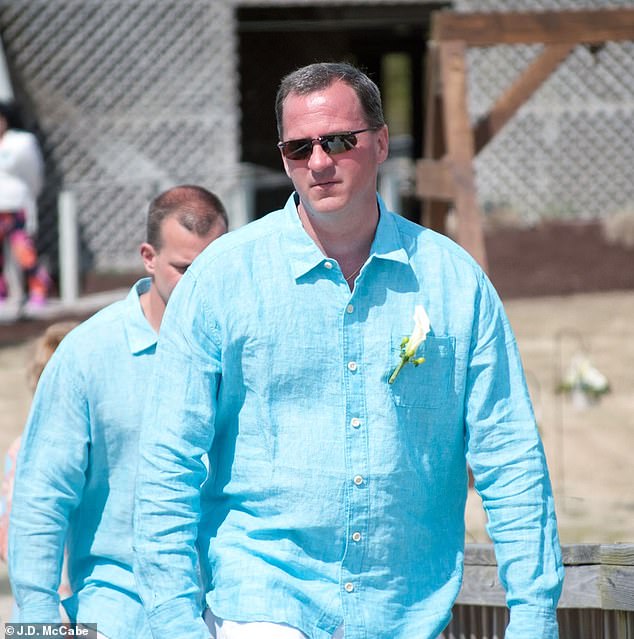 ‘I started to have tingling in my fingers and toes, I had significant interstitial issues, stiffness in the neck, joint pain, difficulty swallowing,’ he says (pictured before)

All in all, McCabe says he lost about 65 to 70 lbs. in a matter of months – an amount so dramatic that colleagues were convinced he was seriously ill (pictured after)

But arsenic isn’t a miracle weight loss drug — at levels of high exposure, it can be extremely toxic.

‘I started to have tingling in my fingers and toes, and I had significant interstitial issues, stiffness in the neck, joint pain, and difficulty swallowing,’ he says.

Long-term exposure can also cause skin lesions, diabetes, pulmonary disease, cardiovascular disease, and cancers of the skin, bladder, and lungs. 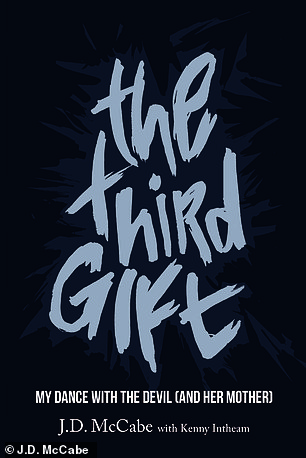 McCabe recounts his extraordinary story in his book, ‘ The Third Gift: My Dance With The Devil (And Her Mother)’

Concerned about his rapid weight loss, McCabe had several appointments with his doctor, who evaluated him for everything from leukemia to Alzheimer’s to Lou Gehrig’s disease.

They couldn’t immediately find a cause, but McCabe’s blood work came back abnormal.

‘My liver enzymes were off, my white blood cells elevated,’ he says. ‘But I never even imagined she was doing anything to harm to me.’

Though McCabe wasn’t suspicious, at least one person in his life was raising the alarm: His sister-in-law, a nurse, told him: ‘I think she’s poisoning you.’

McCabe wouldn’t come to this conclusion until much later. He and Erin finally separated in May of 2015, and when he’d been out of their shared home for over a year he finally got a diagnosis from a specialist, who confirmed through hair and nail tests that he had been chronically exposed to arsenic.

Because McCabe had done most of the cooking in the family, he realized that the arsenic must have been slipped into his protein powder — the very thing that Erin had said he probably put something in to lose weight. 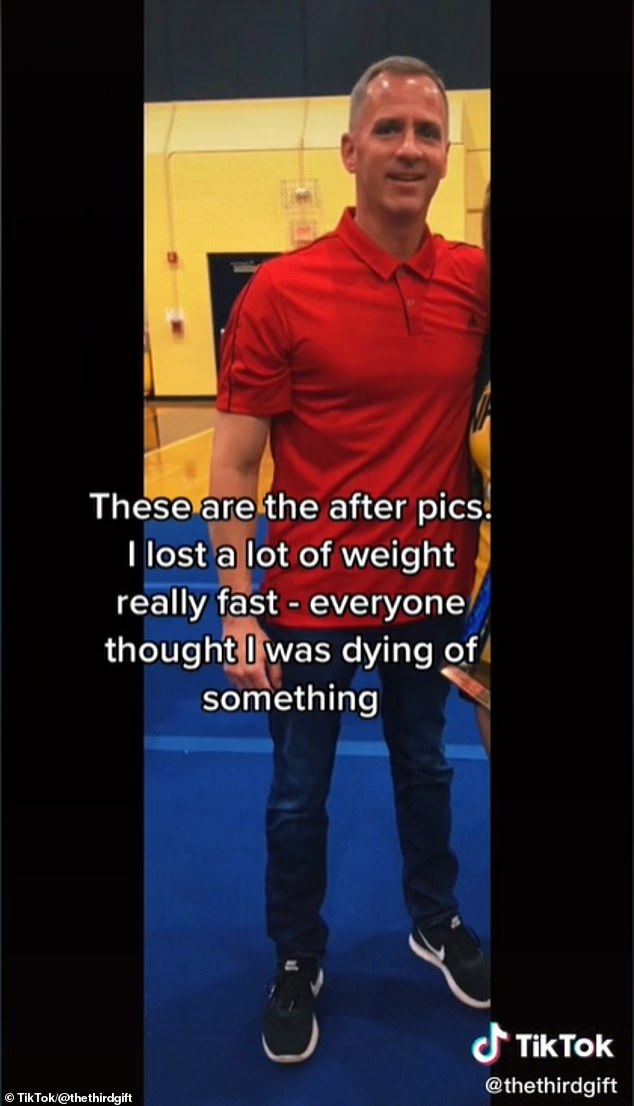 ‘People at work said they thought I was dying of cancer but didn’t know me well enough to ask,’ he says 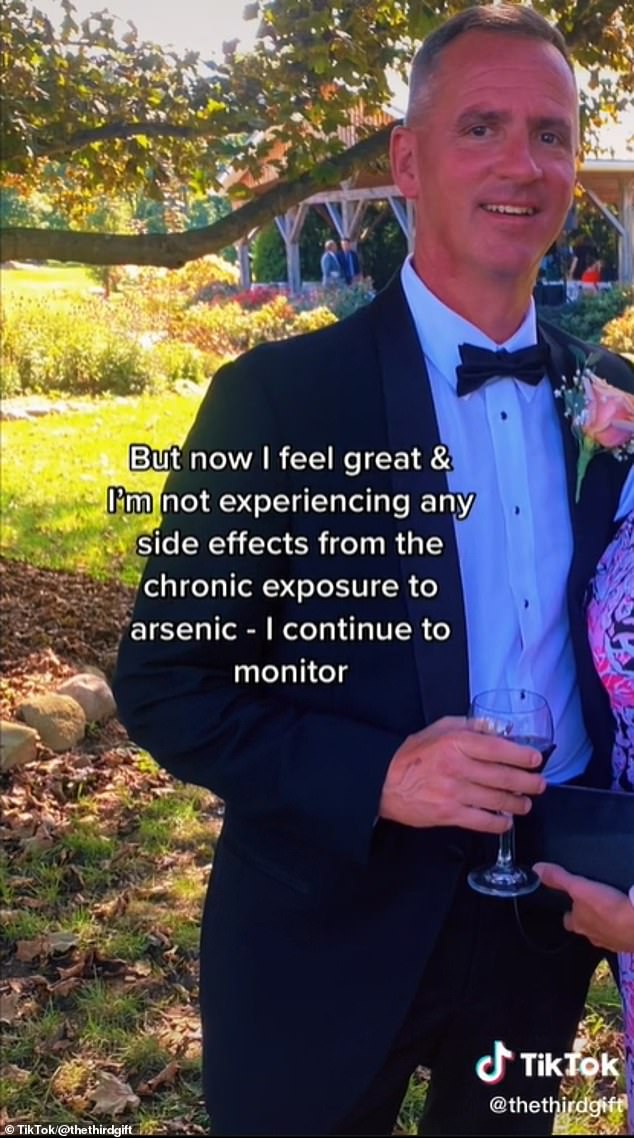 His marriage fell apart in many other ways too. His ex accused him of cheating, abusing drugs and alcohol, and being mentally ill

‘She would taunt me that I was putting something in there,’ he says.

Though McCabe doesn’t have definitive proof that his ex poisoned him, the diagnosis of arsenic poisoning was the final piece of the puzzle that made everything else start to make sense.

He recalls that around the time that he suspects she was poisoning him, she had taken a newfound interest in their finances and life insurance — and had even got him to sign a document naming her as power of attorney for his retirement fund.

Then, as the pair went through divorce proceedings, more shocking details came to light.

McCabe learned that all the while she was accusing him of abusing drugs, she was herself abusing drugs — and allegedly used their children’s names to fill amphetamine prescriptions.

And while she charged him with being unfaithful, she was the one cheating — which he learned dramatically when she revealed she had herpes and insisted he was the one who gave it to her.

‘We were at mediation and the attorney said, “Oh by the way, your now-ex-wife wanted me to let you know you gave her herpes,'” McCabe says.

He was shown her the test results, and sure enough, Erin had the virus — but upon getting his own test results, he confirmed that he did not.

‘That accusation set me free emotionally,’ he says. 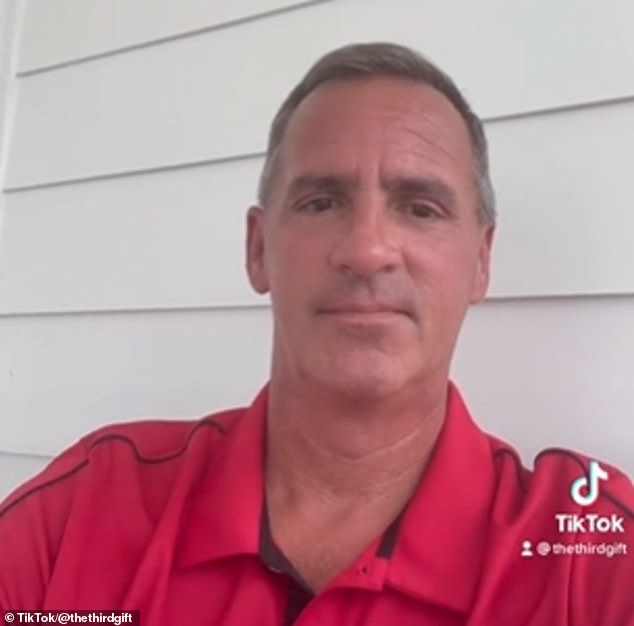 McCabe says he’s ‘doing great,’ and found writing his book to be a cathartic experience. He has recently gone viral on TikTok for telling his story

That moment was so pivotal that it gave him the name for his book, ‘The Third Gift.’

‘The first two gifts were our kids,’ he says. ‘I call [learning of her herpes diagnosis] the third gift because it emotionally set me free, because for four years I was emotionally and verbally abused by her. Every accusation she levied against me, she was doing herself.’

After 23 years together, McCabe and Erin divorced.

The traumatic experience left its mark on the family. In addition to the divorce, the couple’s two children have estranged to limited relationships with their mother since McCabe shared the truth of what she’d done.

But McCabe says he’s now ‘doing great,’ and found writing his book to be a cathartic experience.

What’s more, he’s hoping that sharing his experience can help others in a very real way, and intends to use his book proceeds to start a pair of nonprofits: one for abused women, and another to help the son of a veteran who took his life.

‘My new purpose is looking forward to being able to help others,’ he says.

He’s also in a new romantic relationship with a ‘wonderful woman’ who has been patient and supportive.