A Romanian migrant has been ordered to pay his ex-girlfriend £2,000 after he threatened to use his ‘connections’ at Google to publish naked pictures of her online.

Julian Manea, 37, left the woman ‘living in fear’ after he pestered her with Facebook posts, texts and WhatsApp messages before he showed the photos to her new partner.

Manea warned his ex-girlfriend that he had friends at Google and said: ‘Just be nice to me I won’t do anything. I know that she works in a nursery and I can f*** her up’.

Manea, of Swanton Gardens, Wandsworth, London admitted disclosing private sexual photographs and films with intent to cause distress and harassment.

The judge sentenced Manea to 20 weeks imprisonment, suspended for two years and made him subject to an indefinite restraining order.

Carly Loftus, prosecuting, said the Romanian posted an image of himself and his victim kissing on his Facebook account.

When the woman told Manea she did not want to see him again he started ‘liking’ all of the photos on her social media accounts.

The prosecutor said: ‘In January 2018 he spoke to her flatmate and was told to leave and not to come back, after asking about her new boyfriend – then there were some further Facebook comments.’

Manea sent the woman around 40 messages on WhatApp after he was told to leave by her flatmate.

The woman was at a bar in Fulham with her new boyfriend on January 27 when they saw Manea grinning at them. 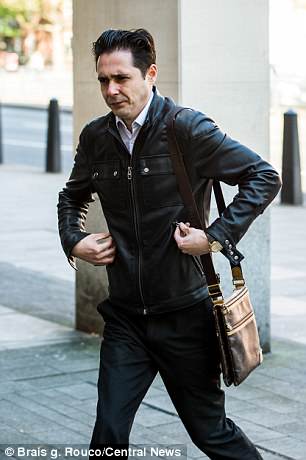 Ms Loftus said: ‘While he was smiling, the friend told the complainant to stay in the toilet and call the police.

‘The defendant insisted he had sat down for a drink. He told the boyfriend five names of men that his partner was sleeping with.

‘The defendant then said that he had naked photographs, one of which exposed her breasts, which he covered with his thumb.

‘The other was of her with knickers from behind. He was going to show a third.’

The boyfriend frantically texted the victim to call the police and Manea was arrested.

Ms Loftus said the woman is ‘stressed, cannot eat or sleep or rest.’

‘She is concerned about losing her job and embarrassed and ashamed of what has happened.’

In a victim impact statement read to the court, she said: ‘He has said to me before he wouldn’t make it easy for me to go.

‘I do not feel safe anywhere – in my house, in the street, at work – I don’t know what I can do to protect myself or to stop him showing people these images.

‘My whole life has been living in fear and put on hold because of him.

‘I am tired and drained and I have had enough.’

Judge Richard Blake told Manea: ‘Hers was the misfortune to have come into a relationship with you.

‘It is absolutely fundamental that people in relationships can say enough, you could not accept that.

‘You caused considerable stress to this lady, it involved a threat to harm her career and her employment.

‘The credit I give to your guilty plea is limited, it was made at the last minute and this lady came to court expecting to give evidence.

‘The victim of your unnecessary and unwarranted harassment and the victim of the photographs being disclosed did nothing to bring this about.’