Man sentenced to 75 years for stealing from Hurricane Harvey victims

A 41-year-old Texas man was sentenced to 75 years in prison on Friday for stealing from the victims of Hurricane Harvey.

Todd Parker Neuwirth was arrested during a traffic stop on September 15, 2017.

Cops had seen him swerving, and when they looked through his vehicle they found a digital scale containing methamphetamine residue, three scanners, blank checks, employment applications, credit cards, and other documents that could be used to steal someone’s identity.

They documents were mostly from individuals whose homes he burglarized after they had been flooded and abandoned in the hurricane two weeks before.

Neuwirth admitted getting some of the documents from crews that had been cleaning up the flooded houses. 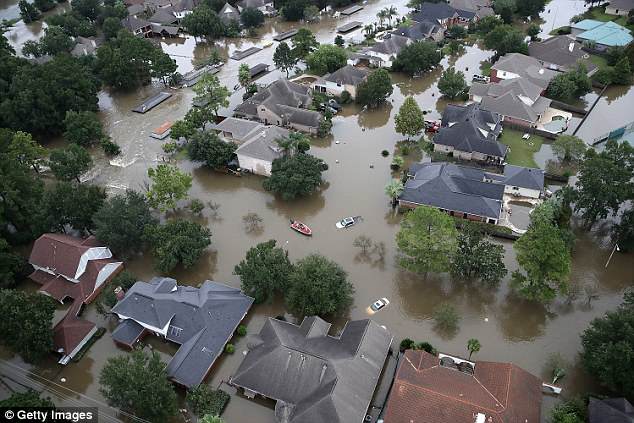 The 41-year-old was found guilty of stealing credit cards, blank checks and other items from the flooded homes of Hurricane Harvey victims. Above, homes flooded by Harvey in August

Investigators discovered that Neuwirth was a career criminal, with no fewer than 12 felony convictions to his name, including time spent in federal prison for defrauding at least six banks of up to $171,000 in a check cashing scheme.

Neuwirth was charged with fraudulent possession of identifying information and tampering with a government record. The jury found him guilty on the charges and sentenced him to two sentences of 75 years in prison, to be served at the same time.

‘This case once again underscores that juries in this community will not tolerate individuals like this defendant, who took advantage of and stole the identities from numerous innocent victims who were simply trying to repair their lives after the devastation wrought by Hurricane Harvey last year,’ prosecutor Sara Corradi said.