Man shot 11 times with taser in Brent, London, walks away

Police fired controversial Taser stun guns 11 times at a crazed knifeman without any effect, it was revealed yesterday.

Joshua Hyde, 30, brushed off barbs from the weapons during a terrifying stand-off in which officers feared they could be killed.

They resorted to attempting to run over the paranoid schizophrenic who was eventually shot in the chest, with the bullet narrowly missing his heart.

Incredibly, the drug addicted drop-out survived and later told investigators he only felt ‘pinching and stinging’ while being Tasered.

An inquiry by the independent police watchdog concluded that officers acted reasonably with their increasingly desperate actions.

But it raised serious questions about whether the American-made weapons have shortcomings which could put police at risk.

Officials discovered Mr Hyde was wearing two jackets and that the metal barbs from the weapons did not penetrate his skin.

The 50,000 volt stun guns operate by creating a circuit through the suspect’s body which incapacitate him by forcing muscles to contract.

The confrontation began when officers were called to a hostel in Brent, north west London, after Mr Hyde threatened a neighbour. 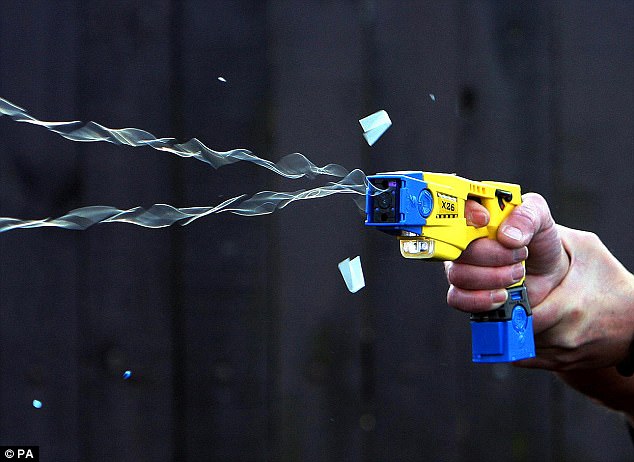 The 50,000 volt stun guns failed to create a circuit because their target was wearing extra clothing

As they searched the suspect they discovered a large knife in his pocket, but he managed to escape before he could be handcuffed.

The incident then spiralled as Mr Hyde went out on to the street, where witnesses described him with ‘bulging eyes’ and ‘deranged and crazy.’

Officers armed with Tasers were called to the scene as the suspect clutched a knife in either hand and he was zapped six times.

The stun guns had no effect, leaving the knifeman to start slashing at the metal wires with the knives so he could walk away.

Another officer arriving at the scene was so concerned his colleagues would be killed he drove his car at Mr Hyde, knocking him across the bonnet.

But he got up, and began stabbing the car with a knife before puncturing the tyres. He was then Tasered a further five times, still with no effect.

More than 30 minutes after the incident began, a convoy of armed officers arrived at the scene. They surrounded the knifeman and he was shot once.

A bread knife, carving knife and screwdriver were recovered. Some of the shooting was captured on body worn video cameras. 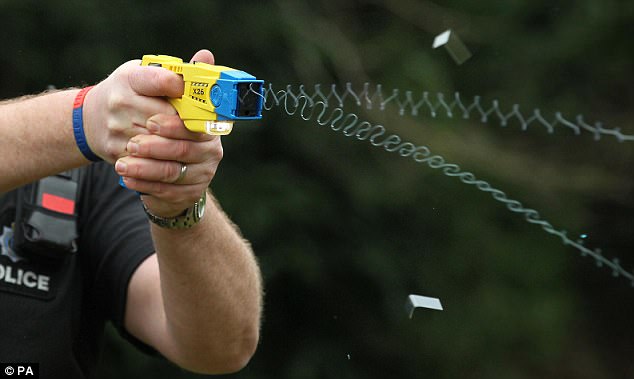 Mr Hyde was charged with subsequently possessing offensive weapons and common assault and was jailed for 24 months, suspended for two years.

‘It was not bad pain, it was like pinching and stinging, and that’s when I cut off the Taser wires. I remember Taser wires everywhere.’

Frontline police representatives want the weapons to be available to every officer and a new model, the X2 which can fire two shots, was licensed in March.

The latest figures show police officers use the stun guns 30 times a day, including situations where they are only taken out of their holster or used to point a red dot.

Cindy Butts, of the IPCC, said: ‘They needed to stop him from causing serious injury or death to them, a member of the public, or himself.

‘Taser was fired a total of 11 times. The man was found to be wearing extra clothing, which we believe reduced the effectiveness of Taser on at least one occasion.

‘Yet he still posed a real danger to officers, leaving them with no option but to use further force … we found that the force used was necessary and proportionate.’

‘They have slightly longer probes and are able to increase the charge when one of the barb’s makes a poor connection,’ he said.

Deputy Assistant Commissioner Lucy D’Orsi, who is the national lead for Taser use, admittd Tasers do not always work.

‘There are many reasons why deploying a Taser may not work properly, such as missing the target, or probes not connecting,’ she said.

‘In these cases, police officers use the National Decision Model to consider alternative actions that may be more effective in safely defusing the situation.

‘This is reinforced at every stage of the world-class training that officers must pass before carrying a Taser.’