Paul Allen, pictured in the red D&G shirt, was shot in the throat when a gunman fired six bullets through a conservatory window, it was revealed (pictured in black: Lee Murray)

The victim of a suspected gangland shooting at the home he rented from comedian Russell Kane has been revealed as the ‘Enforcer’ behind the the largest cash heist in British history.

Paul Allen, 41, was shot in the throat when a gunman fired six bullets through a conservatory window at the £1.2million property in Woodford Green, north east London.

Allen, an ex-cage fighter and convicted robber, had been involved in the £53million Securitas heist in Tonbridge, Kent, in 2006, and was right-hand man to Lee Murray, the ringleader, The Sun reported.

A source told the paper: ‘Whoever did it is going to be very worried Paul is still alive.’

A spokesperson for 43-year-old Kane said that the comedian’s thoughts are with the victim and his family.

Allen, who grew up in Woolwich and was given the name The Enforcer, moved with his wife and children to the rental house last year, it was reported.

He is on life support and is under police guard in hospital.

Residents said that Allen was taken out on a stretcher after the shooting just after 11pm on Thursday.

One said: ‘It’s shocking, some people had found out who he was and obviously it’s worrying when you know his history.’

Another said that they had been told that a semi-automatic sub-machine gun or pistol had been used. 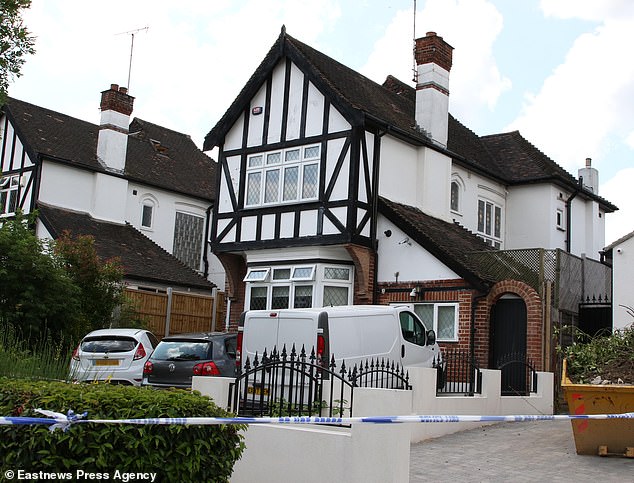 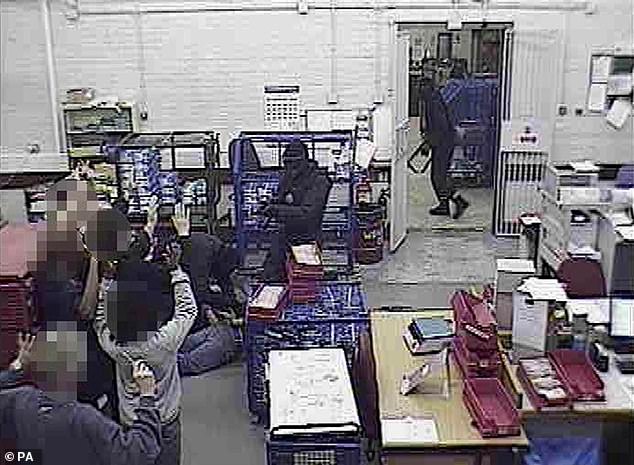 CCTV footage of the Britain’s biggest cash robbery taking place at the Securitas depot in Tonbridge, Kent, in February 2006

One of Allen’s neighbours described him as ‘absolutely huge’.

Allen, Murray, and at least five others had spent months planning the Securitas heist, and following the raid they fled to Morocco where they enjoyed cocaine-fuelled parties and spent thousands on breast enhancement operations for wives and girlfriends in England, according to reports.

Allen and Murray fled to Morocco after the heist but were tracked down and detained, it was said.

Murray is serving 25 years in the north African country – but Allen was brought back to Britain where he admitted conspiracy to rob and kidnap, serving nine years of an 18-year sentence, according to reports. 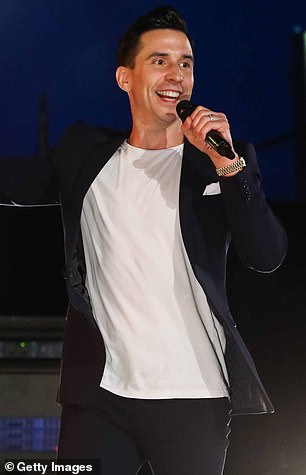 According to the Land Registry, Russell Kane owns the property

The shooter was said to have blasted the victim six times through a conservatory while a car waited around the side of the property on Thursday night.

According to the Land Registry, Russell Kane, who regularly stars on Celebrity Juice and I Am Celebrity Get Me Out of Here Now, owns the property.

Emergency services, including armed police, had attended the property shortly after 11pm.

A neighbour said he believed the attack was ‘targeted’.

He said: ‘A guy had gone around the back, shot through the windows at the back – it’s like a conservatory, like six times and caught him in the throat.

‘I think a car was waiting for him at the other side. It’s definitely targeted.’

The resident, who had lived on the street for 20 years, said he had never experienced anything as violent as a shooting in the area before.

‘We thought he was going to die,’ he added. ‘It didn’t look good. They were here in the ambulance for a good hour – things took a nasty turn.’

The neighbour said Mr Kane had moved out of the property a few years ago.

He added: ‘I did his garden and they had a child a few years ago so they moved up north and they rented the house out to these guys.

‘Everyone is in shock. Things like this don’t happen around here. Luckily no one was caught in the crossfire, particularly as [the tenant’s] partner was in the house.’ 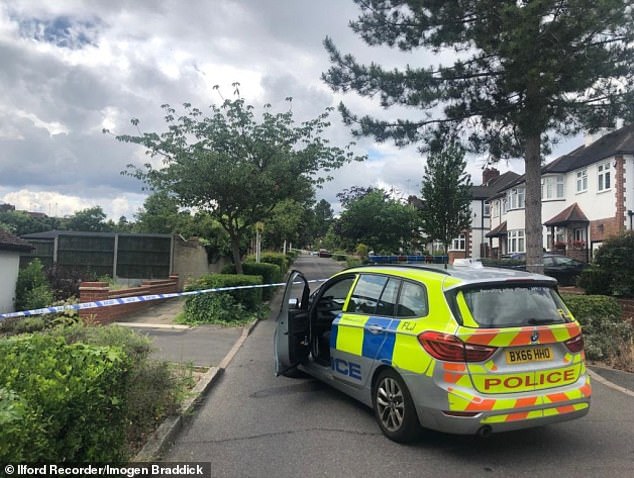 The victim remains in a critical condition in hospital (pictured: police at the scene this afternoon)

Another resident on the road added: ‘I’ve known this area my whole life and this doesn’t happen around here. A shooting is very unusual.’

A mother who lives opposite said she was woken up by the sound of ‘many gunshots’.

Residents said they had hired a private security firm to carry out patrols after a string of car thefts in the residential street, made up of detached mock Tudor homes.

An 84-year-old resident said: ‘It’s obvious it was targeted – they aren’t going to come for me.

‘I’m shocked by it, but I’m not shocked as much as I should be because I know we get burglaries and things around here.’ 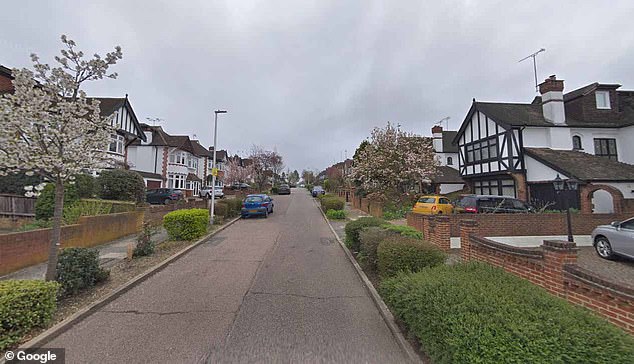 Officers, armed police and paramedics found the victim with gunshot injuries at the scene in Woodford Green, east London (pictured)

‘He has been taken to a central London hospital where he remains in a critical condition.

‘Police were called to Malvern Drive, Woodford Green, at 23:10hrs on Thursday, 11 July following reports of a shooting.