Man stopped for speeding ‘had 13 bags of drugs including cocaine, heroin and pills hidden between his buttocks’

A Florida man has been charged with drug possession after police said they stopped him for speeding, leading to him pull out a variety of illegal drugs from near his buttocks at booking.

Flagler County Sheriff’s Office said on Facebook that Derick McKay, 36, of Palm Coast, Florida, was spotted by a deputy, driving 51mph in a 35mph zone, without his seat belt, at about 9am on July 11.

The deputy then conducted a routine traffic stop, at which the deputy saw McKay ‘making furtive movements inside the vehicle.’

Derick McKay, 36, faces multiple felony drug charges after he was stopped for speeding and then arrested for driving on a suspended license in Florida

When the deputy went to speak with McKay, he allegedly smelled marijuana wafting out of the car and coming from McKay himself. The deputy said that McKay appeared to be nervous and that his hands were shaking.

McKay allegedly said no when the deputy asked about the smell of marijuana in the car and if he had anything illegal in the vehicle or on his person.

While being patted down prior to being taken to jail, the deputy said he felt a ‘foreign object near McKay’s buttocks,’ according to the Facebook post.

When asked about the object, McKay was said to have refused to turn it over, at which point the deputy told him that he would be charged with felony, introduction of contraband into a detention facility, if he brought narcotics into the jail.

McKay still refused to remove the items from his pants, police said.

Once at the jail, officers gave McKay one last chance to hand over any contraband he had in his possession before being booked.

It was then, police said, that McKay complied. 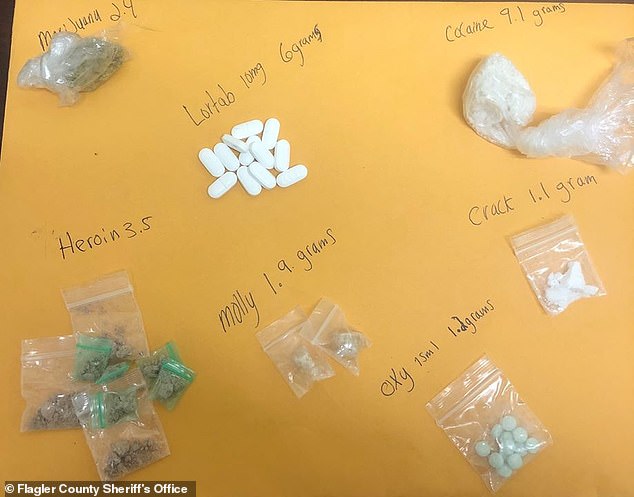 McKay is being held without bond and has a series of previous arrests on drug charges dating back to 2008, police said.

‘This was a routine traffic stop that ended with a serious poison peddler behind bars,’ Flagler County Sheriff Rick Staly said in a statement. ‘This dealer is not new to Flagler County and despite many chances, he just doesn’t seem to learn his lesson and a get a real job. I hope the courts deal harshly with him and get him off our streets for good before he sells to someone who overdoses or dies.’