Simon Bunce, a former member of the RAF, threatened to kill several people, including his ex-wife Kim and an RAF Wing Commander after he began suffering from schizoaffective disorder.

He pledged to ‘crucify’ the RAF officer, describing him as a ‘lying bastard’, and even warned a police investigator he would ‘have his b******* cut off’.

Bunce, of Andover, Hampshire, lost his job at a computer data firm more than a decade ago when it was alleged his credit card was used to access child pornography websites in 1999.

His case was widely reported in 2008 when he went public after proving his identity had been stolen, meaning he was never charged with any criminal offence in relation to the credit card use.

In 2015 his wife Kim left the family home and took a car registered in her name, prosecutor Stephen Parish told Winchester Crown Court.

‘Thereafter, she received numerous phone calls and text messages from Simon, accusing her of stealing the car,’ he said.

‘He told a woman at the DVLA that he would shoot Mrs Bunce if he did not get the car back and told Kim that if she did not return the car to him he would destroy her, her family and the matrimonial home.’

Bunce accused Kim’s uncle of causing the break-up and said he’d destroy his family ‘one at a time’.

He also left a voicemail message for her previous employer, accusing him of having an affair with her.

He was arrested in November 2015 and while awaiting trial tried to rejoin the RAF after being medically discharged in 1982.

When his application failed, he began harassing a Wing Commander Nicholas Paish, president of the recruiting and selection medical board.

‘In February 2016, a woman who works in the office of occupational medicine at RAF Cranwell took a phone call from a man asking for Dr Paish,’ he said.

‘Asked who was calling, the caller replied “this is Squadron Leader Simon Bunce, RAF retired”.

‘He said he had received Dr Paish’s letter dated January 29 and he would “now target his family and crucify the lying b******”.’

On June 7, 2016 – the day before he was due to stand trial – he called a Wiltshire Police crime recording operator and asked for information about a car he said had run him off the road before threatening to kill his ex-wife. 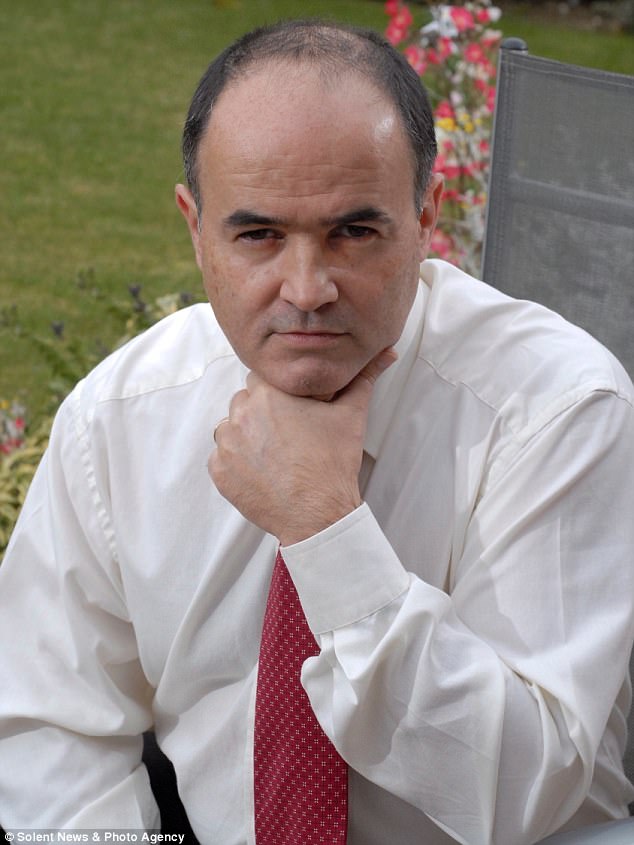 Mr Parish said: ‘He then changed the subject and started talking about his ex-wife. He became more and more excited.

‘He said he had had harassment from the Home Office and the MOD police and as a result his wife had left him.

‘He said “she’s now a crown witness against me”, gave her address and the volume increased.

‘He suggested someone should put an armed protection unit on her for the rest of her days.

‘He said “if I get thrown into prison next Friday by a district judge, she dies the next day”. He said he had hired a hitman to kill her.’

Mr Parish said Bunce was ‘generally uncooperative’ during police interviews and threatened to ‘crucify Hampshire Police’ if they searched his house.

Bunce admitted two counts of making a threat to kill and three of sending an electronic communication intending to cause distress or anxiety.

Andrew Taylor, representing Bunce, said he had made ‘significant progress’ with his schizoaffective disorder following treatment.

‘He is genuinely sorry for his actions. In his own words, these events were an aberration and should not have happened,’ he said.

Bunce was also sentenced for three previous counts of harassment, which he was convicted of in 2016, and breach of a 12-week suspended sentence handed down for harassment and stalking.

Judge Andrew Barnett, sentencing, said: ‘There’s a very sad pattern of complete loss of control in your threatening of the various people.

‘They were nasty and serious threats.

‘There is a risk of the commission of further offences. Your past bears that out because offence after offence has been committed.

‘Your communications start on a rational basis and then disintegrate into unpleasant rants that could lead into far more serious matters and I have to be aware of protecting the public.’

He imposed a hospital order, requiring Bunce to continue treatment to help his mental health problems, with a restriction order to reduce the risk of further harm to the public.