In a photo shared by Wiley on Instagram, the Red Devils duo were seen posing alongside the rapper after a performance in Dubai on Sunday.

The grime artist has previously sparked controversy with his online anti-semitic tirades on a number of occasions.

He was banned from Twitter in July 2020 after being widely condemned for a series of posts, including one which called Jewish people ‘cowards and snakes’.

He caused further controversy when he claimed his Jewish associates in the music and entertainment industry ‘still see us as slaves’ in an interview with The Voice newspaper.

He subsequently set up a new Twitter account under the handle @WileyRecordings, which the Campaign Against Antisemitism (CAA) says was used to ‘spout racist hate towards Jews’.

Rashford has been hailed for his political work, speaking out against racism in football and using his public standing to put pressure on the UK government when it came to a free school meals programme.

Last year, he was made an MBE on the back of his efforts to end child poverty by creating a level playing field for all ages and races. 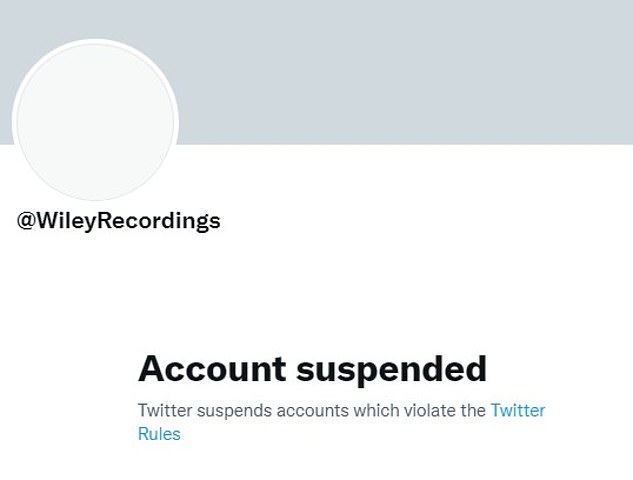 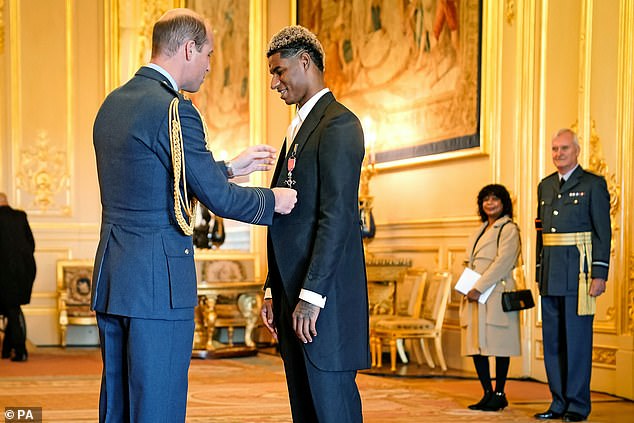 In 2020, Lingard was one of a number of footballers to take part in a campaign to raise awareness about antisemitism.

The 29-year-old featured alongside fellow top-flight players and managers in a video to mark Holocaust Memorial Day, urging football fans to condemn hatred and antisemitism.

The midfielder has also spoken about the importance of education and Black History Month to combat racism.

He has advocated for social media platforms to introduce stricter measure, such as proof of ID, to prevent racist trolls.

Wiley, who has struggled to get bookings in the UK following his anti-semitic tirades, performed at a +44 event held at Club Blu Dubai in the V Hotel.

He later posted the photo with the Premier League stars, alongside the caption: ‘Thank you @officialdjironik for getting me a booking and big up these dons.’ 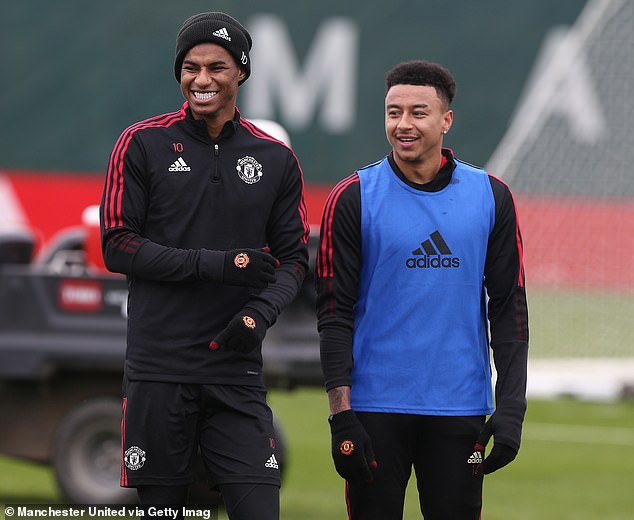 Fans took to Twitter to express their disappointment that the footballers, Rashford in particular, would pose with Wiley after their political work.

Actor Tracy-Ann Oberman posted: ‘Well this is depressing. Unashamed jew hater Wiley hanging out with someone I admire enormously.

‘Dear Marcus Rashford I hope someone informs you about Wiley’s repulsive hatred ASAP.’

Another Twitter user described Rashford’s actions as an ‘odd move’ and questioned how United’s Jewish community would feel towards them.

‘As fantastic as Rashford has been politically for this country,’ they wrote. ‘Taking snaps with Wiley who has been an unapologetic and vocal antisemite in recent times is a somewhat odd move.

While another could not hold back their confusion, adding: ‘How can you do all the good in the world that Marcus Rashford does and then hang out with Wiley?

‘The man is literally a self confessed racist – confused is not the word.’

With the Premier League season halted until February 5, several top-flight stars have headed to the footballer’s playground of Dubai.

Dubai seems to be an extremely popular location for the Premier League players who are not on international duty to put their feet up.

Liverpool trio Andy Robertson, Alex Oxlade-Chamberlain and James Milner grabbed the chance to squeeze in 18 holes in at one of the world’s most luxurious courses as they were among the big names competing in the Dubai Desert Classic Pro-Am on Tuesday.

Jurgen Klopp’s players were paired with South Africa’s Charl Schwartzel, the winner of the Masters in 2011, as they took on the rest of the field, which included top golfers like Ian Poulter, Henrik Stenson and Danny Willett, at the stunning Majlis Course at The Emirates Golf Club. 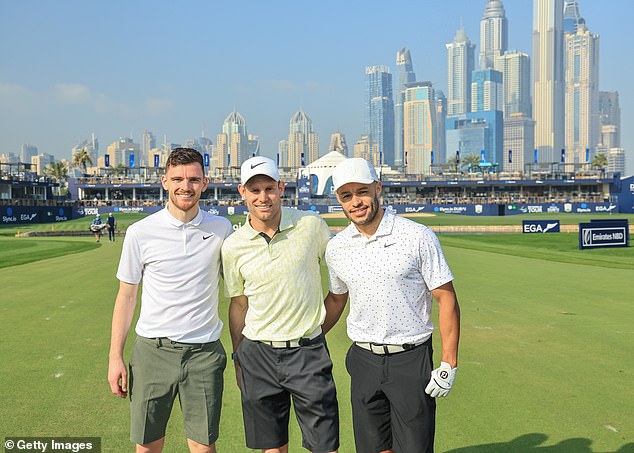 (L to R): Andy Robertson, James Milner and Alex Oxlade-Chamberlain are all golfing in Dubai 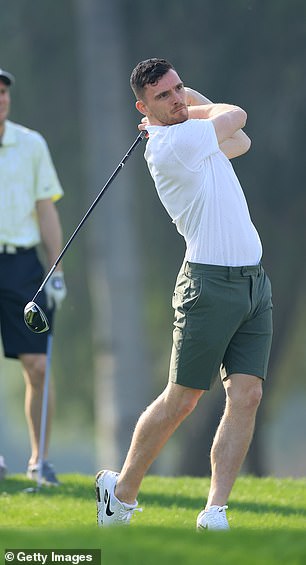 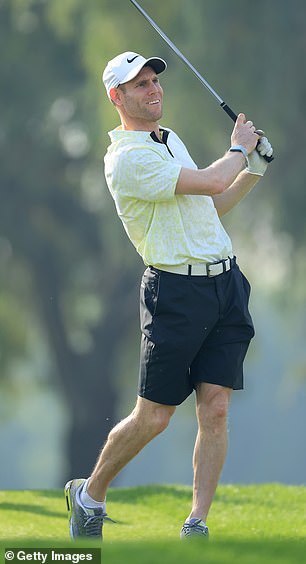 The England defender and goalkeeper were playing in another group on Tuesday alongside professional golfer Ryan Fox but they posed for a picture with Ryder Cup star and former Open winner Shane Lowry before they teed off.

The Irishman posted the image on Instagram, with the caption: ‘Great group today in Dubai. Easy money for the Irish.’

Manchester City star Jack Grealish, meanwhile, was reunited with his former Aston Villa team-mate John McGinn – it is believed the duo are in Dubai. 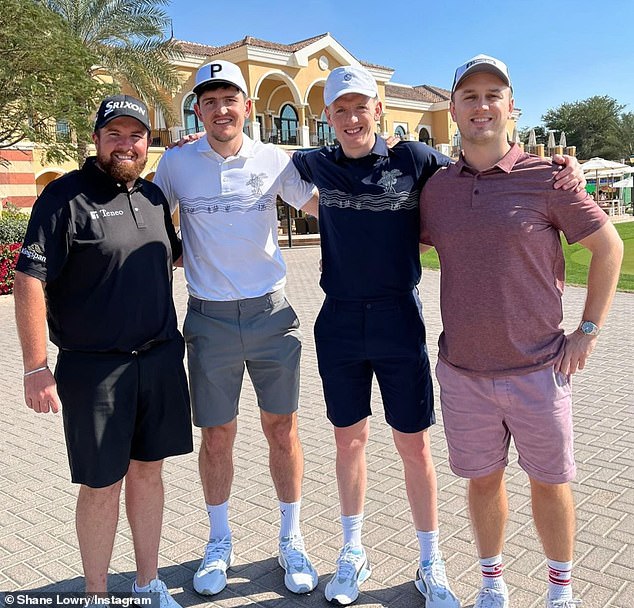 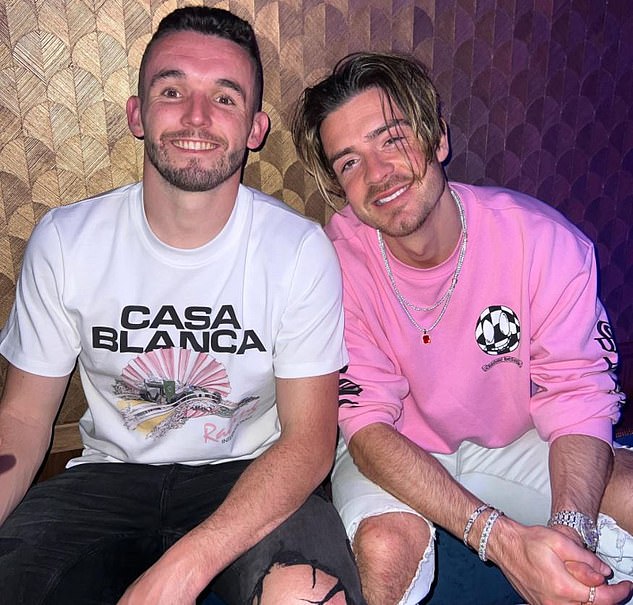 Jack Grealish (right) and John McGinn (left) are also in Dubai, with the England star calling McGinn his ‘brother’