Manchester United are only willing to part ways with Paul Pogba if he expresses a desire to leave the club in January.

The 28-year-old will enter the final six months of his deal next month and has yet to agree fresh terms at Old Trafford.

That leaves the France international able to discuss a pre-contract with foreign clubs from New Year’s Day, with Real Madrid, Paris Saint-Germain and Juventus linked with the midfielder.

But The Mirror claim a bid to sign Pogba next month from any interested party will only be accepted if he makes it clear he wishes to depart Old Trafford.

However, the report adds the club are not expecting any advance to be made by a club to sign him during the winter transfer market, while ESPN claim the Red Devils hierarchy expect him to stay for the second half of the season.

But the German insisted it was not his job to convince Pogba or any other member of his squad to stay at the club. 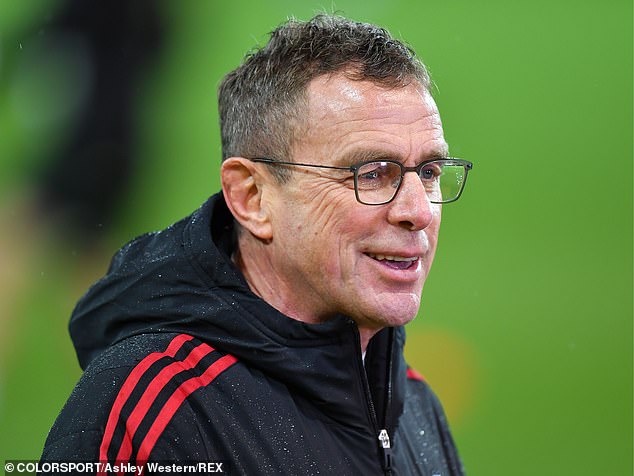 ‘Players need to want to stay and play for the club,’ Rangnick said.

‘If a player doesn’t want to play for a club like Manchester United, even in the long term, I don’t think it makes sense to convince him to change his mind.

‘This is such a massive club, with fantastic support, I don’t think anyone at the club should try to convince a player to stay.

‘Let’s have him come back, get fully fit and training with the team, then we will see where we stand.’

Rangnick met Pogba for the first time in person earlier this month following his return to the UK from Dubai.

The former Juventus man has not represented the club since their 2-2 draw away at Atalanta in the Champions League, while his last top-flight appearance came in the 5-0 drubbing by Liverpool. But Rangnick – who has overseen Premier League wins against Crystal Palace and Norwich – insists he will hand Pogba the opportunity to adapt to his ‘gegenpressing’ style.

‘I have to get to know him. I have to speak to him. It is about being fully physically fit. The way we want to play is high intensity,’ Rangnick added.

‘It will take some time for him to get fully fit. Once he is fully fit, I see him as a midfielder rather than a striker or a left winger.

‘The only thing of interest to me is how do we get him fully fit.

‘He can be an important player, I am fully aware of that. But that is true for all the players. I am not only the coach of Paul Pogba. I am also the coach of all the other players.’