Man Utd 1-2 Sevilla: Mourinho’s side crash out of Champions League

It is said 0-0 in the first leg is a dangerous score, but Manchester United made it doubly so with an uninspired, cautious display that ended in humiliation on their home turf. Sevilla scored twice in a second-half that exposed the limitations of this team, certainly the limitations went sent out to play in such an unimaginative way.

Marcus Rashford, alone, and even them only sporadically, showed the determination to run at the Spaniards, to challenge them in wide positions. The rest was mediocre in the extreme. Wayward, long balls. Ponderous, slow play. Attack, attack, attack, shouted the fans. 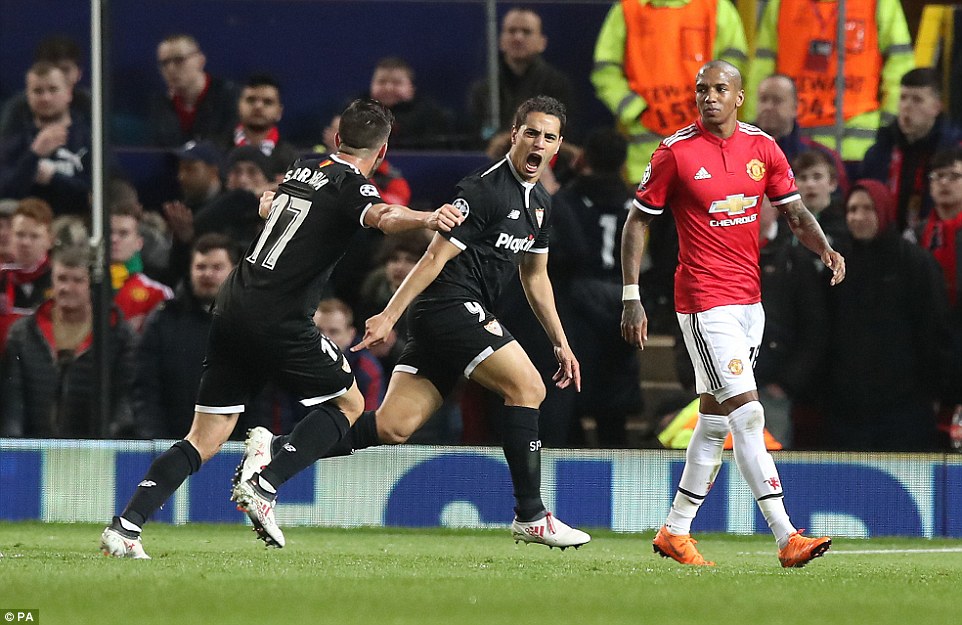 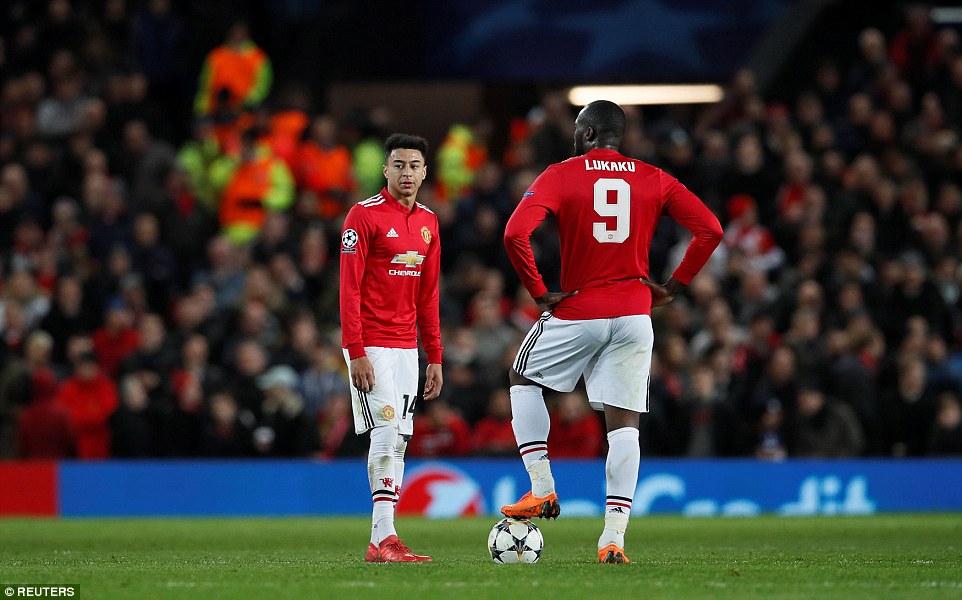 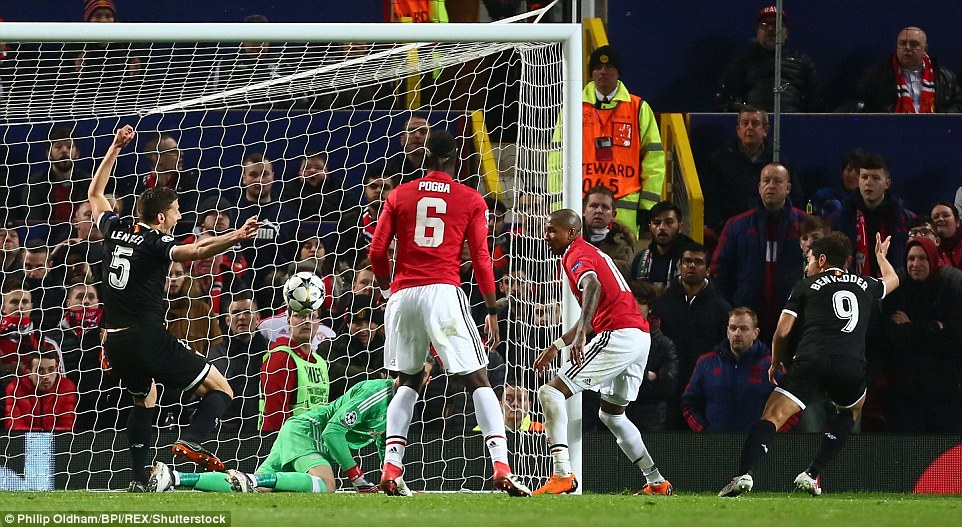 Sevilla did, finally locating their range after a serious of wild attempts, to send United stumbling out of the competition, disoriented, humbled. At least they can concentrate on coming second now.

It is fitting that an attacking substitution changed the game. Wissam Ben Yedder has been Sevilla’s top scorer in Europe this season but hasn’t started either tie against United. Introduced with 18 minutes remaining here, he changed the game. His first goal came after two minutes of involvement, in which time his movement was already having an impact. It was a superbly taken goal. Pablo Sarabia picked him out through the middle and Ben Yedder held off the defensive attention to bury the ball at David De Gea’s left post. Statistics show how difficult that is this season.

The next, the killer, was a little less perfect but not less effective, a header at the back post after losing Ashley Young that De Gea scrambled to clear but was judged correctly to have crossed the line. Romelu Lukaku pulled one back from a Juan Mata cross – and how United could have done with his invention from the start – but with only seven minutes remaining it was too late. Trying to do a job on Sevilla, United had a job done on them instead. If there is blueprint from this match, it should be tucked away, never to be unfolded. This is no way for Manchester United to play in Europe; it is a way for them to lose.

It says something of the upheaval and trials of Manchester United since Sir Alex Ferguson stood down that less than half of Tuesday night’s starting line-up had ever played a Champions League knock-out game at Old Trafford – the defence-minded players, mostly. It was 2014 when United last ventured into the business end of this tournament and anyone who expected a safe, uneventful passage to the quarter-finals would have been very disappointed come half-time.

Manchester United had the best chance of the opening 45 minutes, but it was singular and they never looked less than vulnerable. Had Sevilla been able to hit a bovine backside with the proverbial stringed instrument they could have been in real trouble. Nil-nil in the first leg is not the good result once imagined. Indeed, in the modern Champions League, 70 per cent of the teams that have got a goalless draw away have gone out in the second leg at home.

United were bucking that trend with five progressions in eight after a 0-0 first leg away, but this did not make for comfortable viewing, even for Mourinho. He stood for long periods on the edge of the technical area, hands deep in pockets, expression sober. He had picked a midfield to smother as well as deliver, Marouane Fellaini preferred to Paul Pogba – or even Scott McTominay – beside Nemanja Matic, to counter Sevilla’s aerial threat from set pieces, and offer some of United’s own.

Indeed, Fellaini played much as he did under Louis Van Gaal, alternating between defensive midfield duties and support striker, flicking the ball on to that other giant, Romelu Lukaku. It wasn’t greatly effective. Indeed, the one time United did threaten to score was in a sweet passing move between Fellaini and Alexis Sanchez that breached a very competent Sevilla defence. 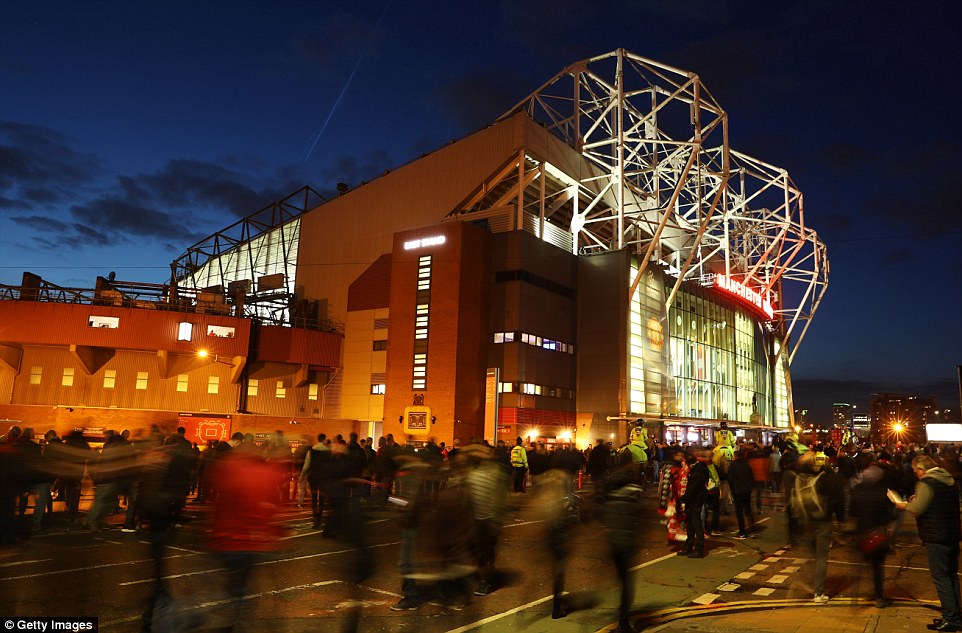 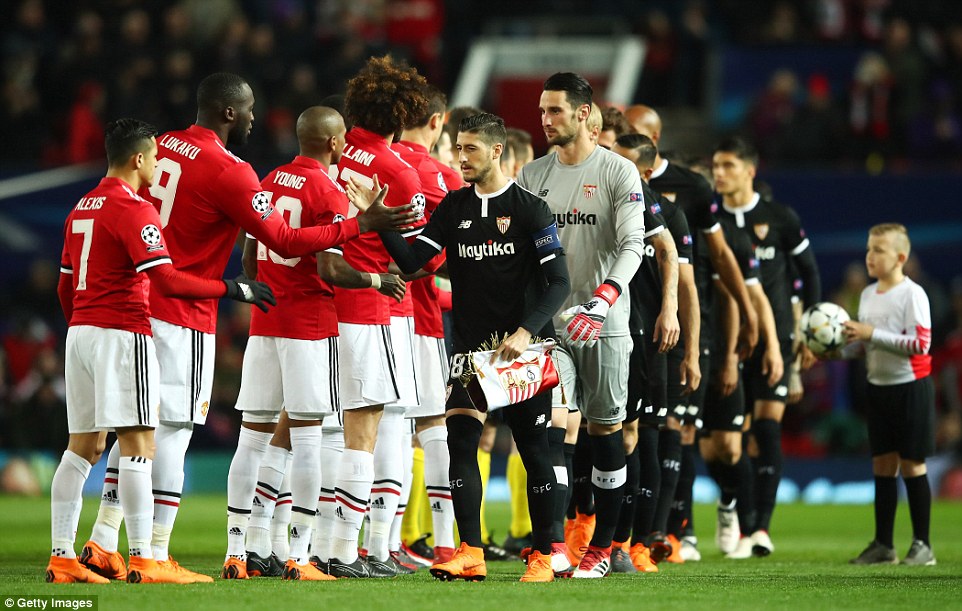 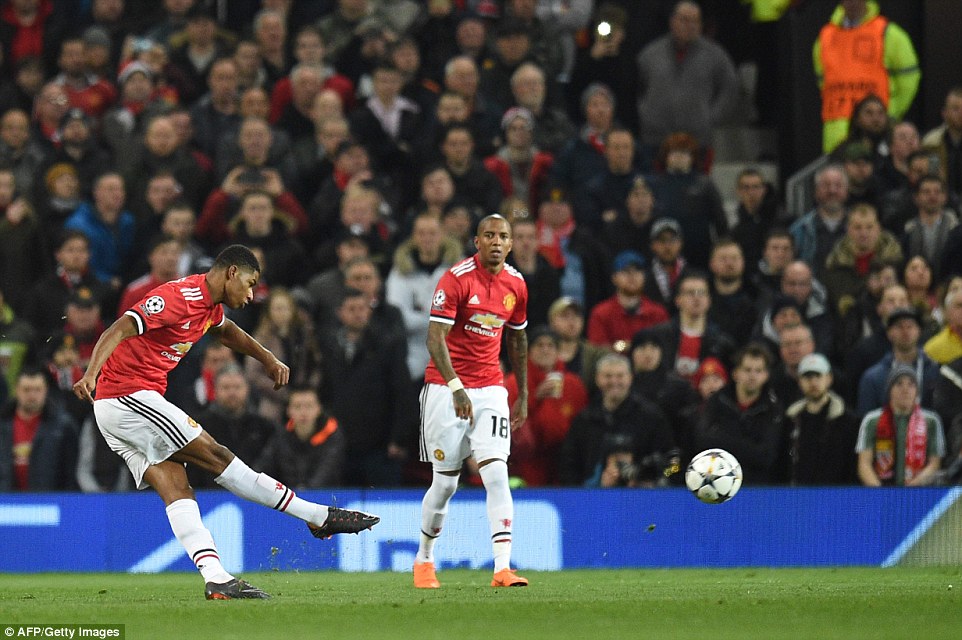 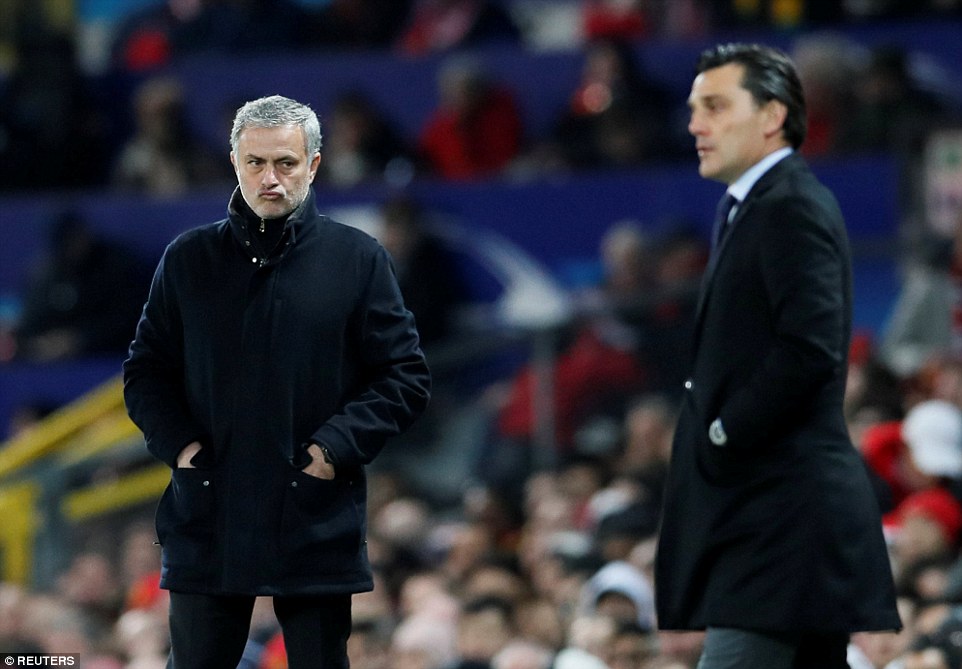 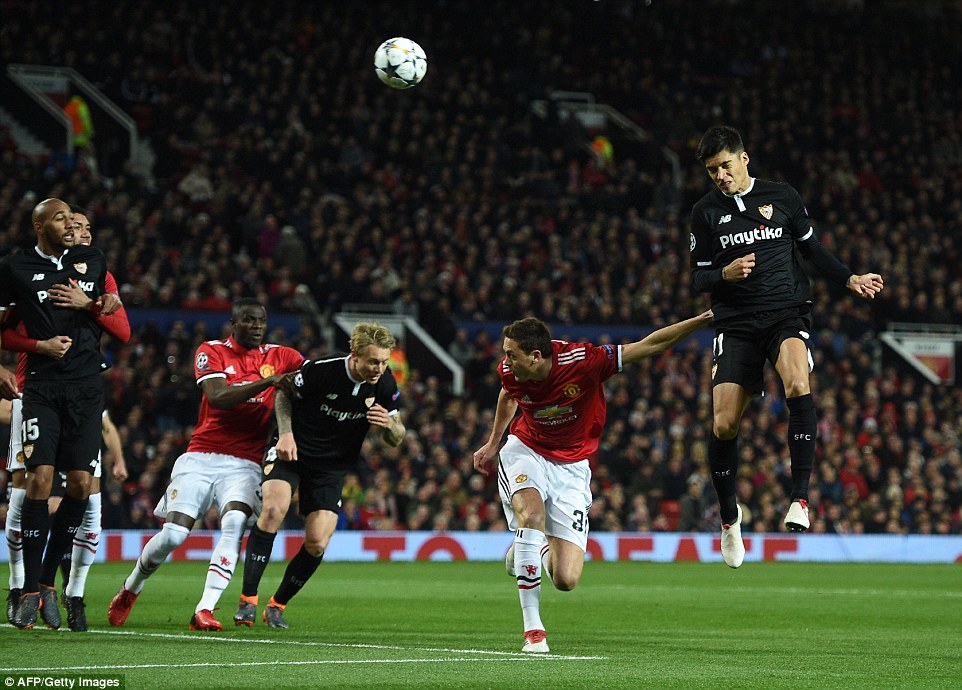 That came in the 38th minute, Fellaini feeding Sanchez and getting the ball on the return before forcing an excellent save from Sergio Rico, cutting inside from the left. That aside, it was meagre stuff from United. They started brightly when Jesse Lingard put in Lukaku who shot over with a minute on the clock, but then the lion’s share of possession, as well as several good shooting chances, were conceded to Sevilla – who could have made a devastating impact with greater accuracy.

In the tenth minute, the dead ball threat that clearly concerned Mourinho was apparent, a left-side corner from Ever Banega met by wideman Joaquin Correa, his header travelling over the bar. Sloppiness could have cost Uniterd dearly on several occasions and in the 14th minute a poor pass from Eric Bailly was struck directly to Correa, who gave it to Luis Muriel in a good position. He snatched at a very loose shot, however, and sent it over the bar.

Much the same after 17 minutes when Pablo Sarabia, Muriel and Franco Vazquez combined, before Vazquez sent another effort into the night air. Then, 11 minutes later, Fellaini was the culprit, conceding possession in his own half and allowing Sevilla to counter attack through Sarabia, and finally Muriel. Wide again.

David De Gea, in United’s goal, has saved a staggering 20 of the 21 shot that have come his way in the Champions League this season – a statistic made all the more amazing if one considers that the ‘expected goals’ register says he should have conceded from five of them – but he was hardly needed here.

The second-half started in much the same fashion, Correa dangerous in the penalty area, Bailly brilliant in the tackle to deny him, the ball falling to Vazquez who sent it wildly into the stand. If Sevilla ever found their range. At least United were getting close, Lingard forcing the second save of the night from Rico, before Marcus Rashford put a ball across the face of goal, the vital touch elusive. 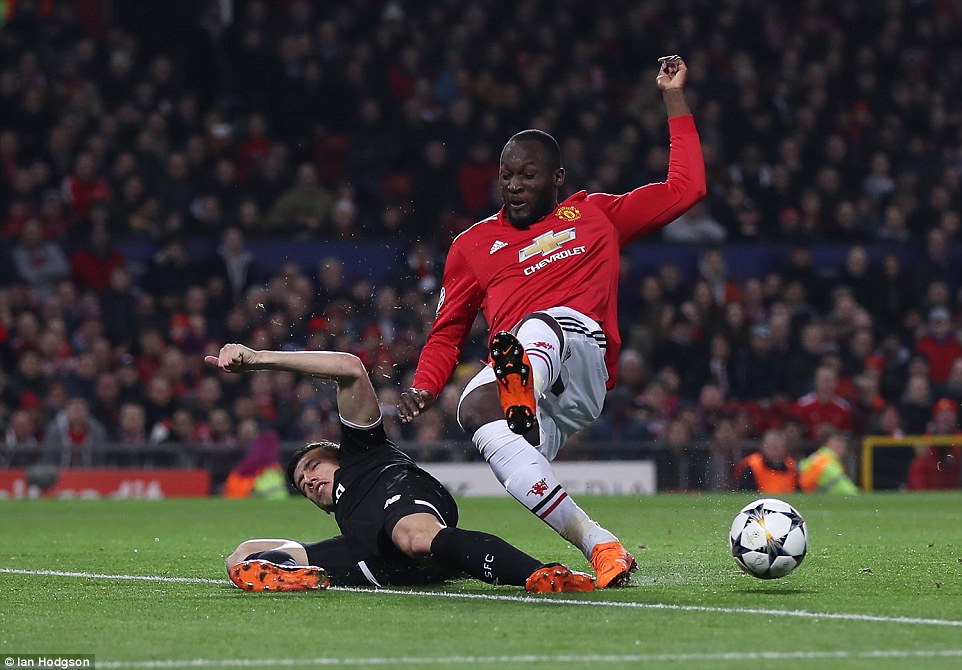 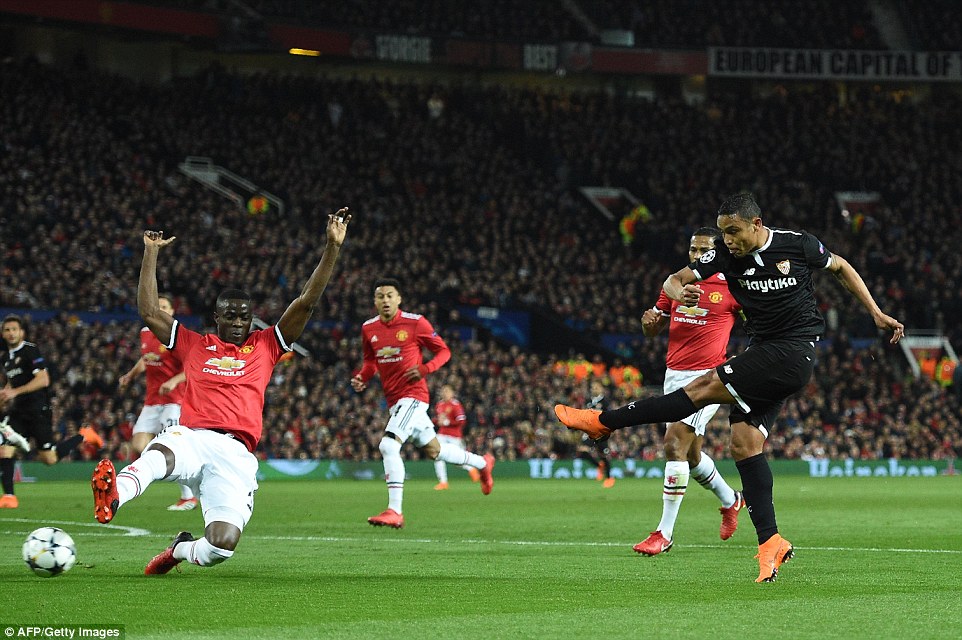 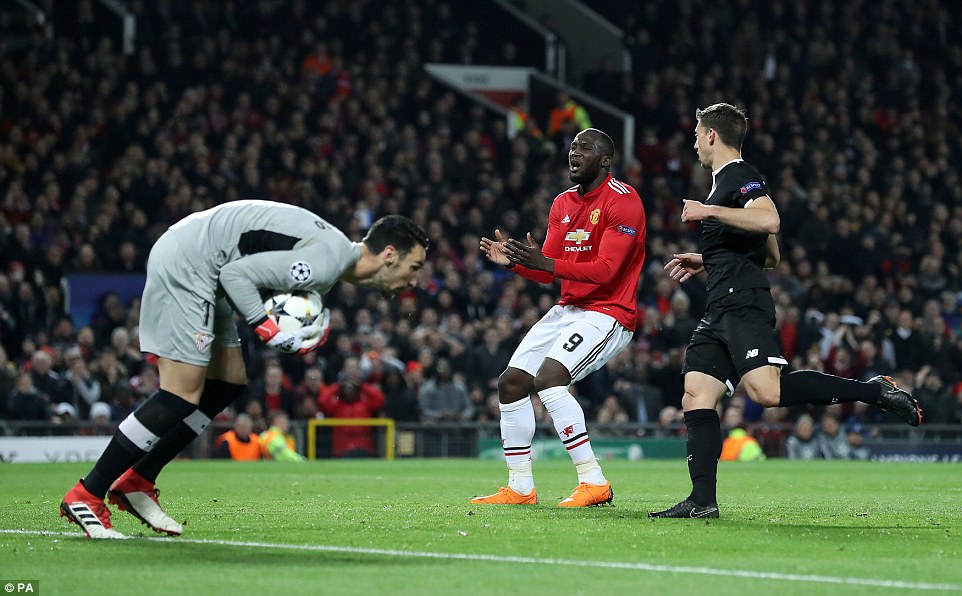 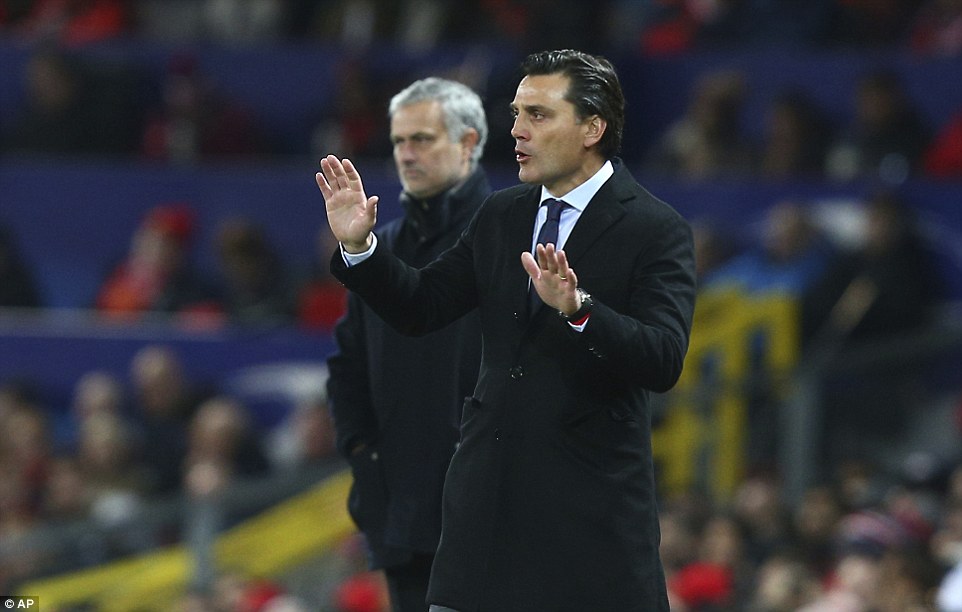 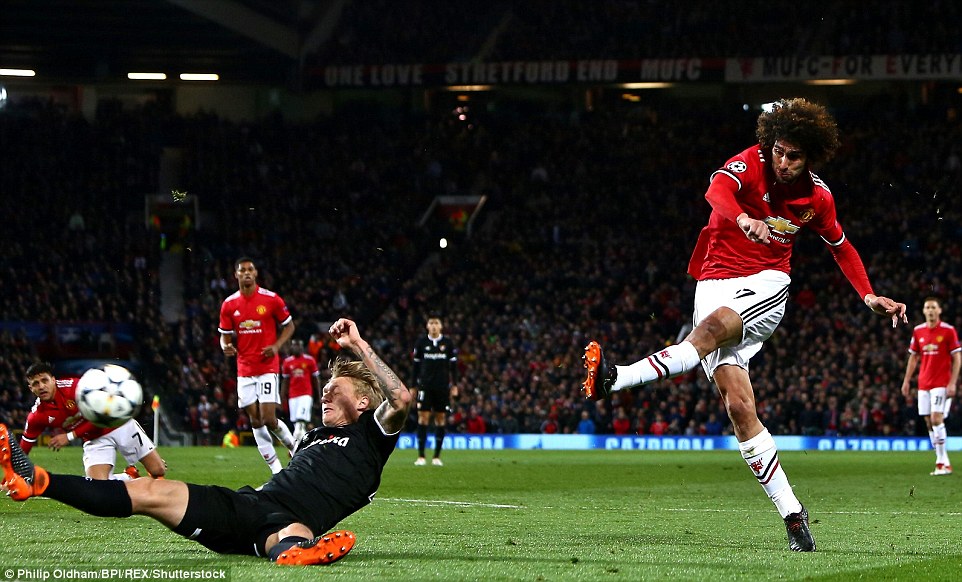 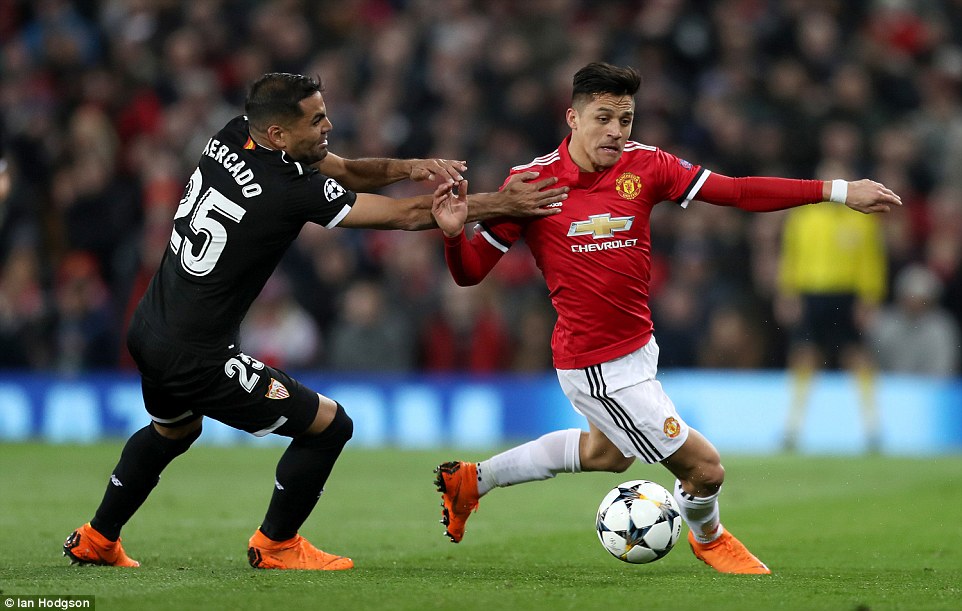 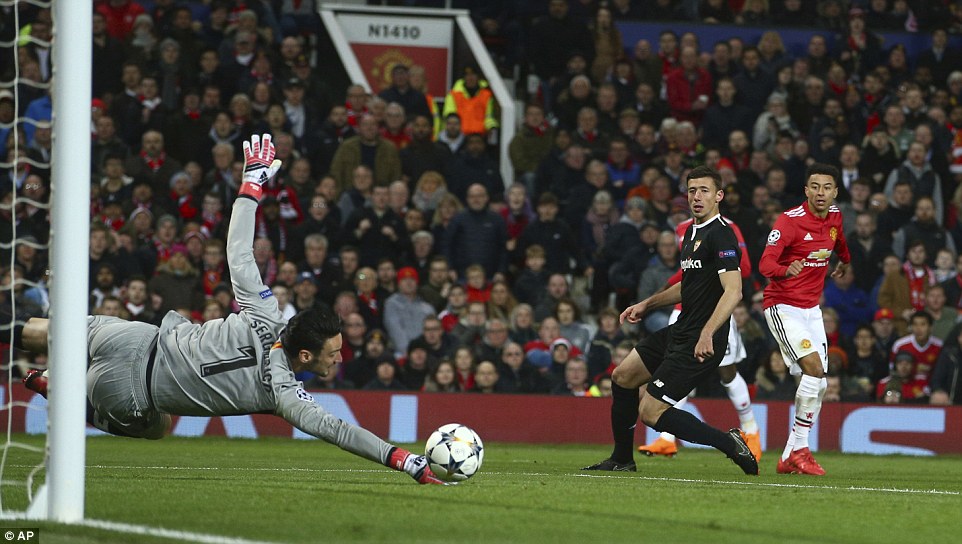 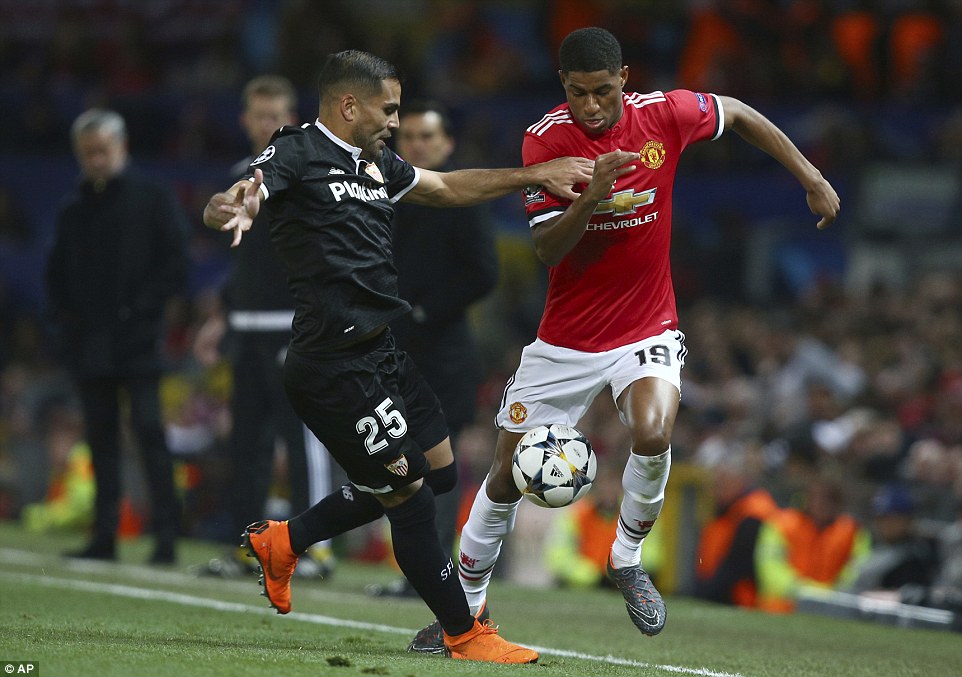 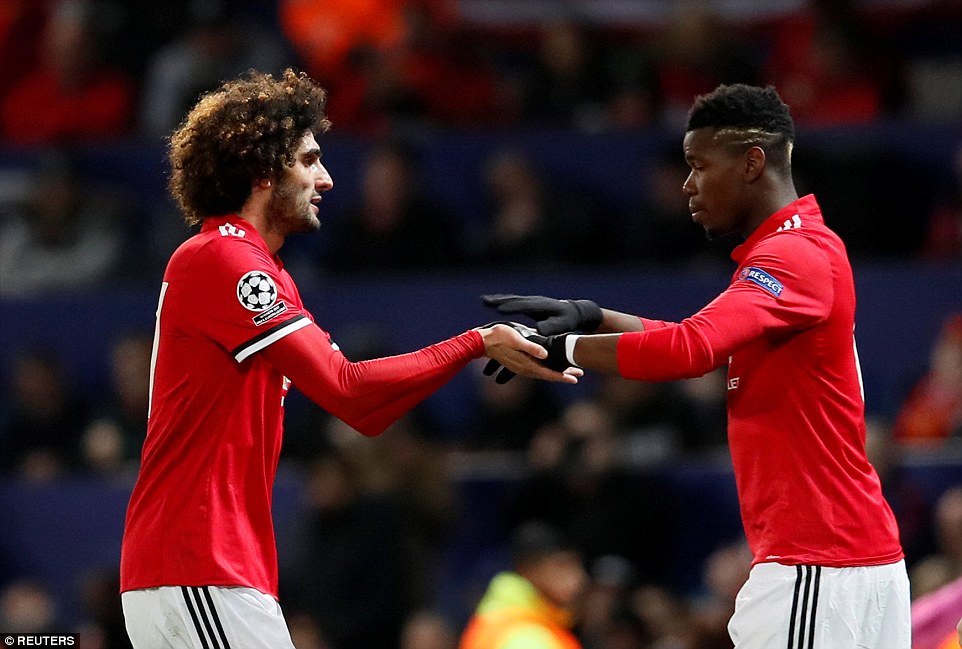 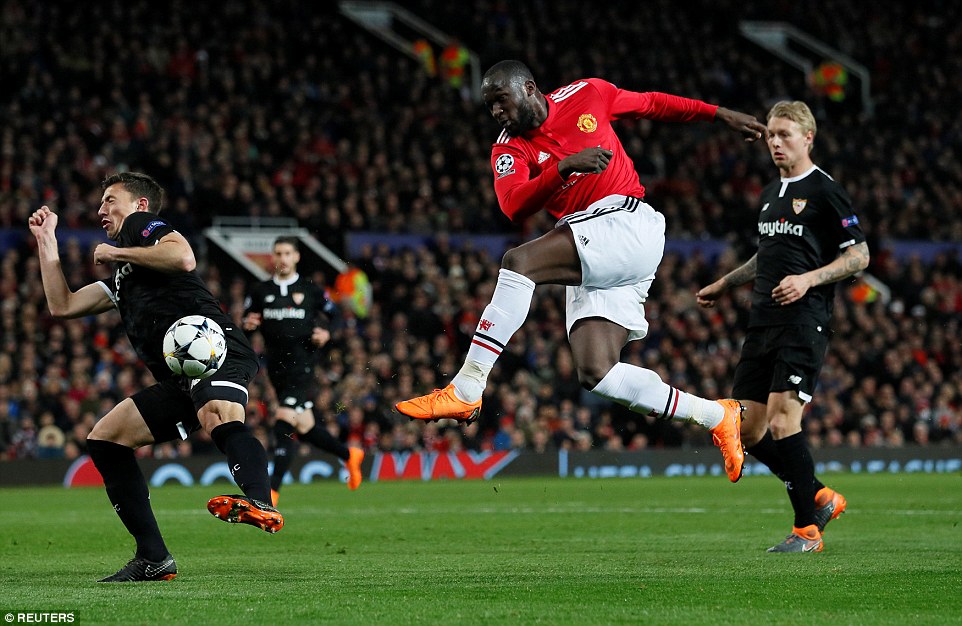 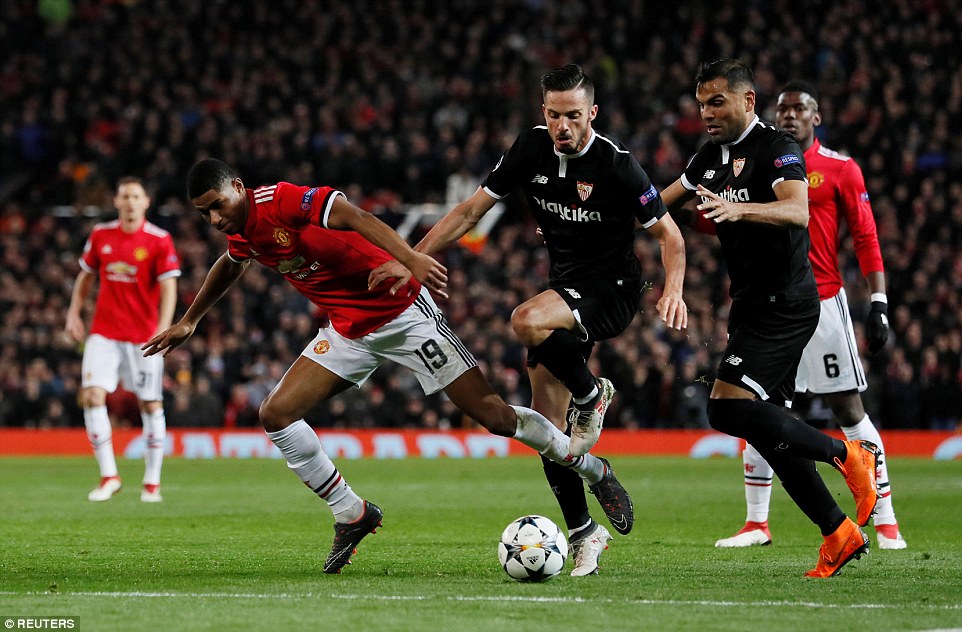 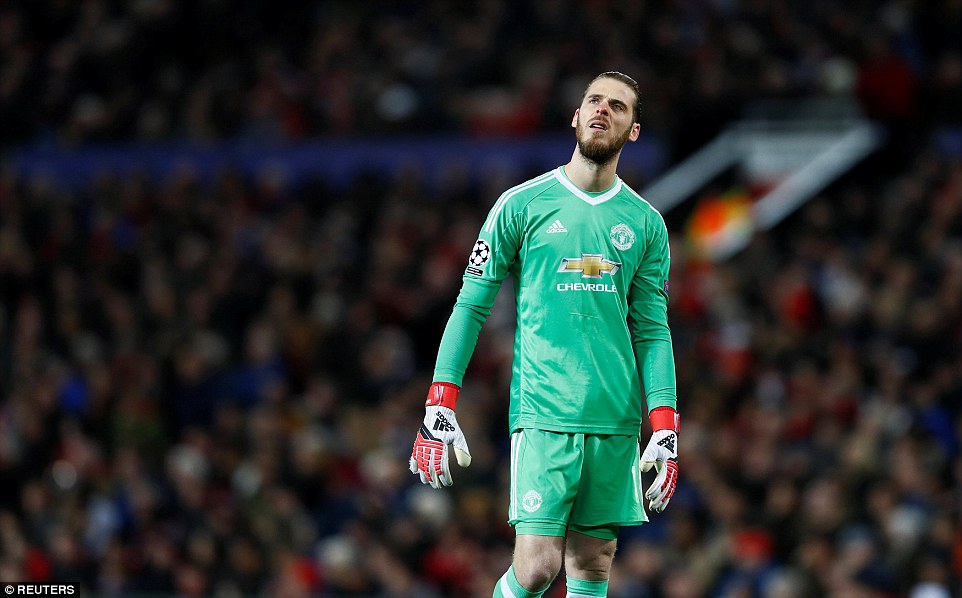