For Manchester United, a night to believe that the success this place once became so accustomed to is beckoning again, after four bleak years.

Champions League knock-out territory is theirs once more – 1,336 days after defeat to Bayern Munich in the dying stages of the David Moyes era bundled them out of it so ignominiously.

Though a substantially greater challenge than this lies in wait there, their match-turning goals – scored in 65 sublime seconds just beyond the hour – extend their unbeaten run here to 40 games. Not since the Matt Busby days of the mid 1960s have they matched that. 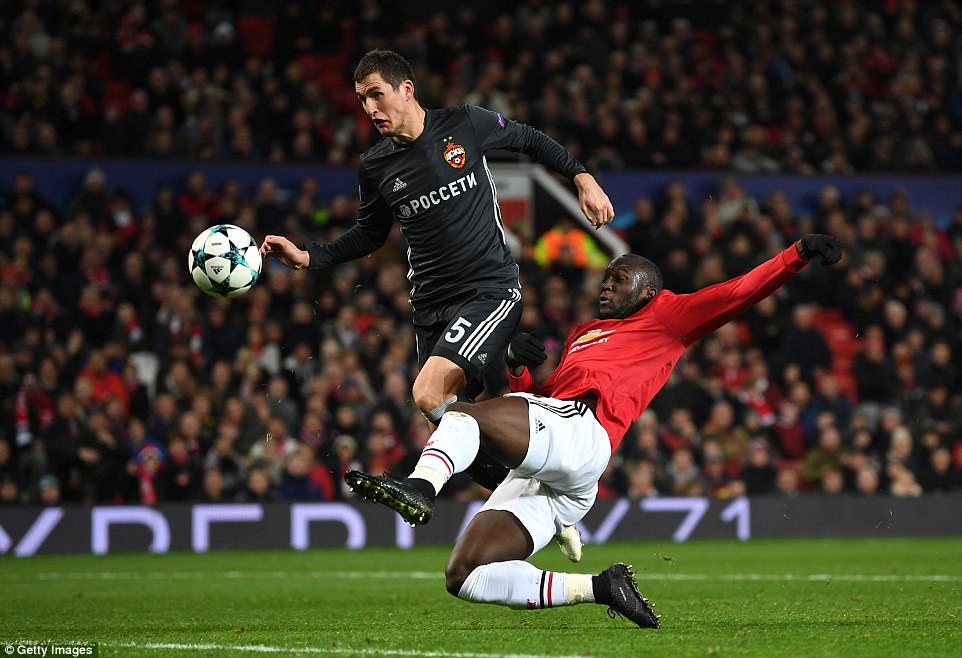 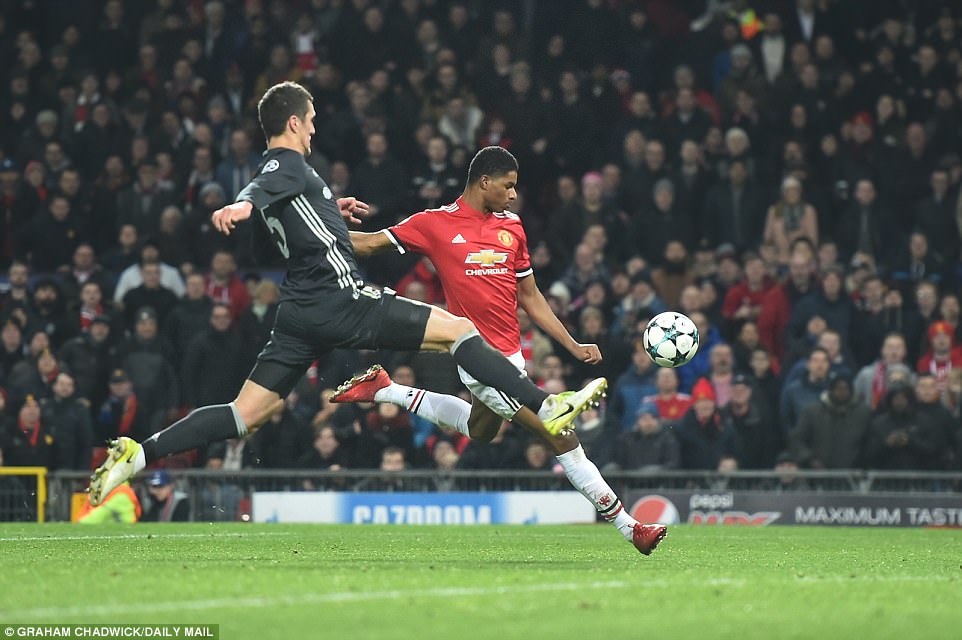 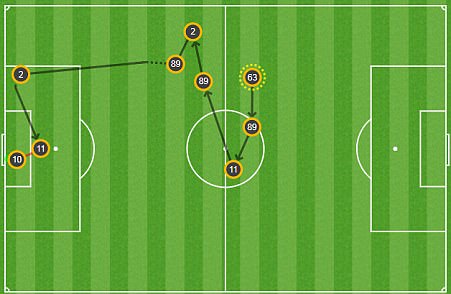 While CSKA’s goal was controversial. it did come about through a classy team move down the right wing. For more facts and stats, visit our exclusive MATCH ZONE service by clicking here. 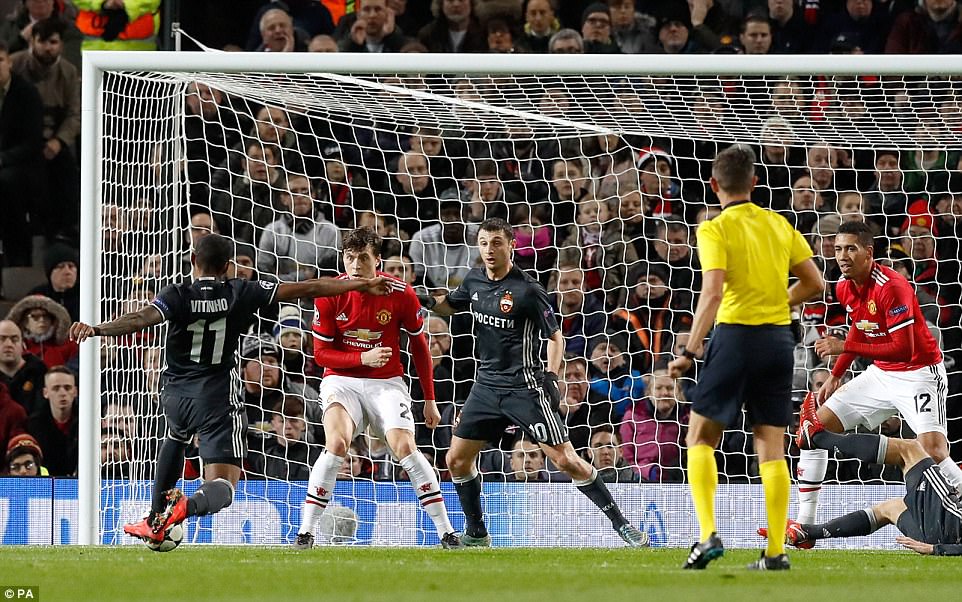 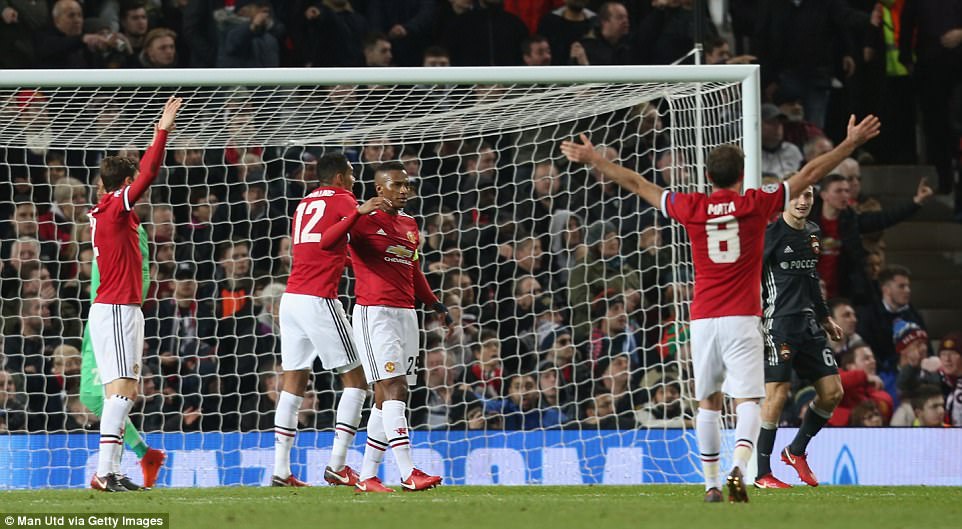 Man United claim offside – confusion seemed to come from Daley Blind being off the pitch; legally he played Dzagoev onside 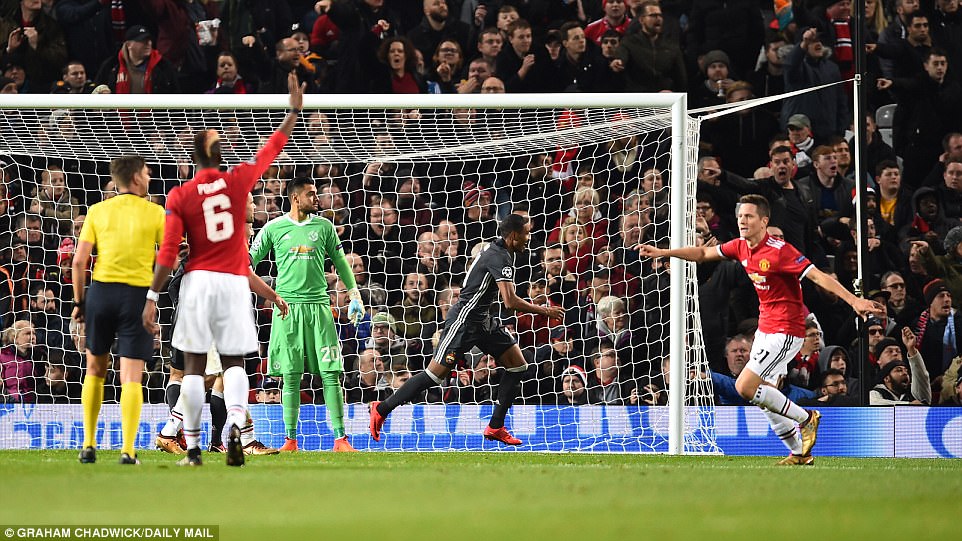 Ander Herrera runs to the referee to complain about the goal, which went through two scorers and a number of explanations

Juan Mata complains to referee Gianluca Rocchi about the goal, however United were made to pay for their profligacy 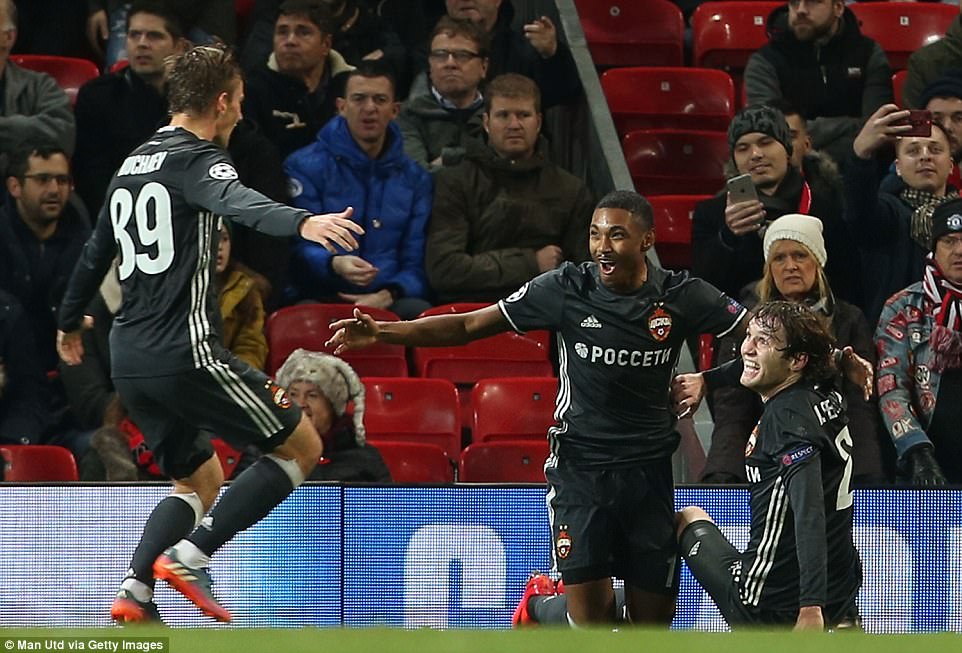 CSKA celebrate the goal, which was awarded to Vitinho by UEFA despite the fact it clearly struck a team mate on its way in

ALSO IN GROUP A

Basel advanced to the Champions League knockout rounds by beating Benfica 2-0 on Tuesday.

In the second half, forward Dimitri Oberlin doubled the lead by netting a header from close range to send the Swiss side to the knockout phase for the first time since the 2014-15 season.

The Swiss champions finish second in Group A, three points behind Manchester United.

Benfica completed a poor campaign without a single point and only a single goal scored.

Briefly, there had been doubt, when the Russian side scored on an extremely rare incursion into home turf, but the turnaround, just beyond the hour, was clinical and quite beautiful in its execution.

A clipped left-foot shoot towards the six-yard box from Paul Pogba which Romelu Lukaku volleyed cleanly into the net, and a lofted left-foot ball from Juan Mata which bounced once before Marcus Rashford buried it, with his left foot, in the right hand corner of the net.

The muted celebrations belonged to a side affronted to have fallen behind in the first place but who needed this momentum ahead of the exacting test which Manchester City will pose them here on Sunday. The wins sees them top their group, with five wins from six.

It was symptomatic of the lifeless atmosphere that someone forgot to play the Champions League anthem in an half-empty stadium before kick-off, though what ensued was an opening 45 minutes full of life.

No-one displayed more of it than Luke Shaw, making only his 50th appearance since his much-vaunted arrival from Southampton at a time – three years ago – when United thought their return as a competitive force would be far less difficult than it has.

If one moment encapsulated what Shaw brought in that period then it was the sight of him making up a yard to ground to catch an advancing Vitinho and put the ball out of play in the closing stages. He moved ahead at pace, too, and was one of Mourinho’s early attacking threats – volleying an Antonio Valencia cross shot that Igor Akinfeev smartly saved on 20 minutes. 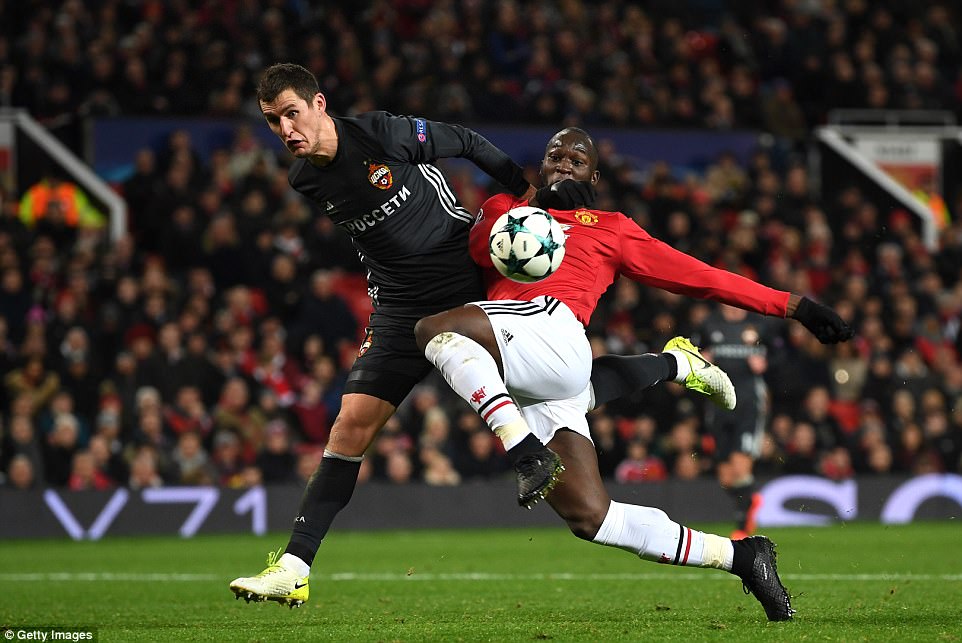 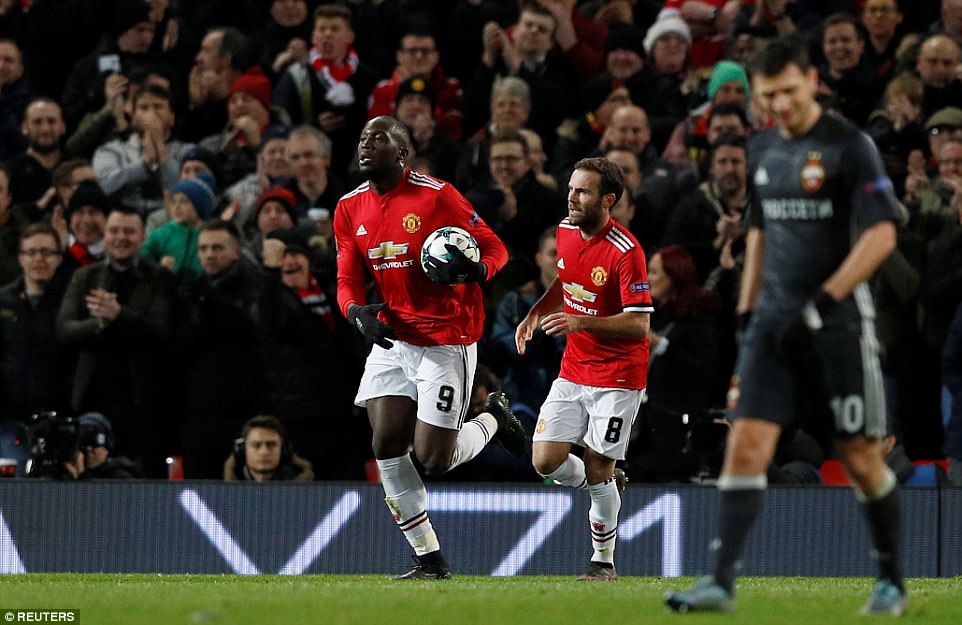 Lukaku immediately grabbed the ball from the net and ran back after scoring – less than two minutes later, United were ahead 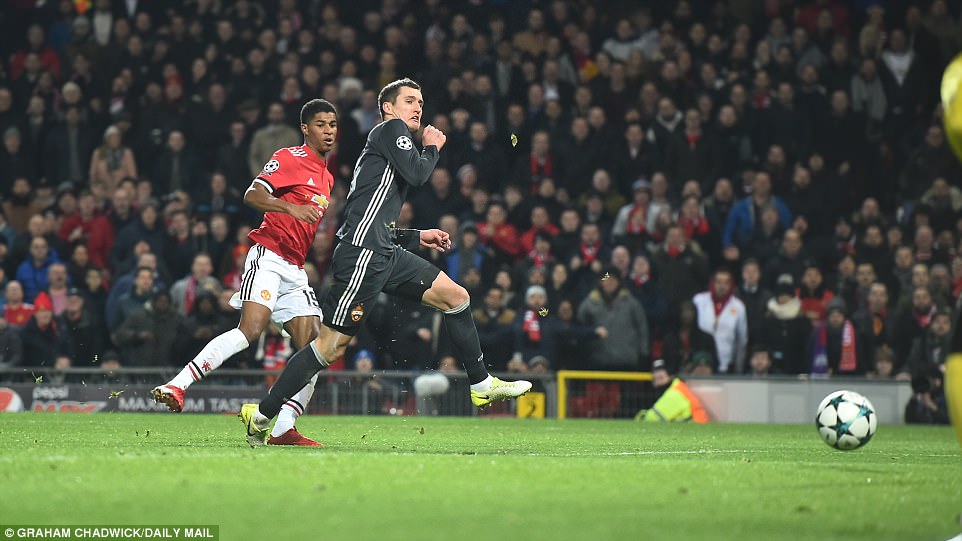 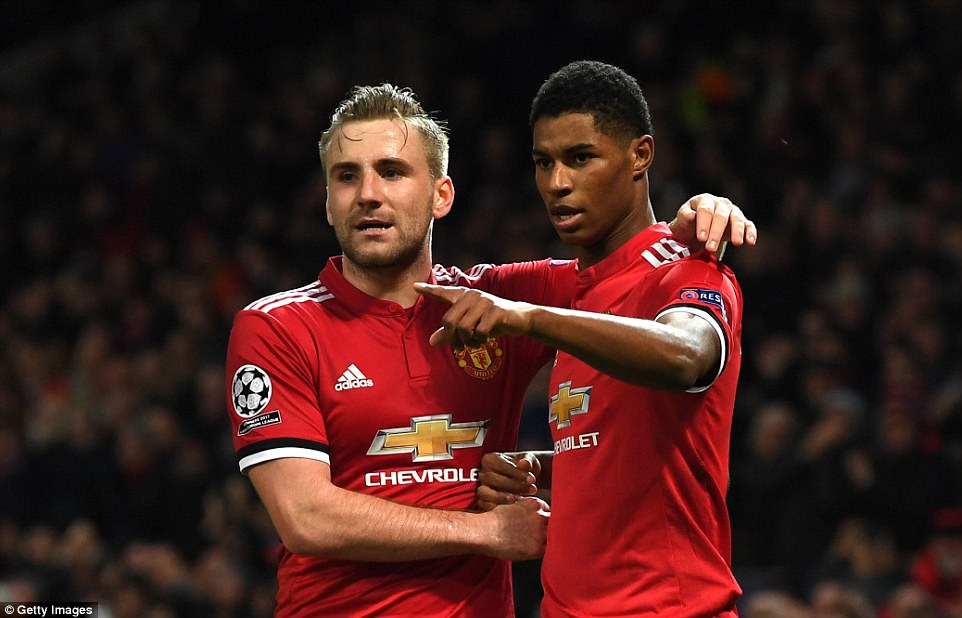 The worry for United ahead of Sunday’s date with destiny against Manchester City was the struggle of those who employed to finish these chances. Marcus Rashford, who hadn’t scored in nine games, experienced the luck of an individual desperate to break such a sequence when he ran onto Romelu Lukaku’s return pass but sent it left-footed against the base of the post.

Lukaku, who has scored one goal in 12, wanted three bounces of the ball before putting his foot through it when Paul Pogba had sent him, which was enough time for Akinfeev to ready himself and save. Mourinho’s theatrical applause for the forward was a sign that he feels the Belgian needs love.

United came to rue the profligacy when the Russians – who had offered very little – conjured a highly controversial goal on the stroke of half time. Shaw erred for the first time, being drawn towards the ball and allowing Mario Fernandes to escape down the right flank and cross.

Fedor Chalov missed his shot but Vitinho’s strike cannoned in Alan Dzagoev’s back. United insisted the forward was offside though Daley Blind, who had stumbled out of play, appeared to be technically still ‘active’, playing him on. Uefa awarded Vitinho the goal. 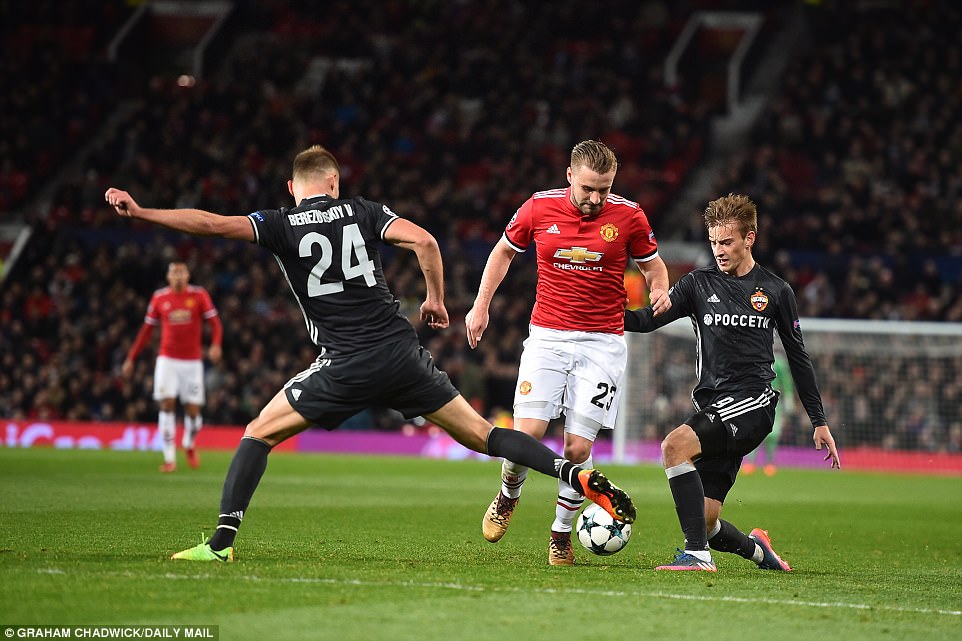 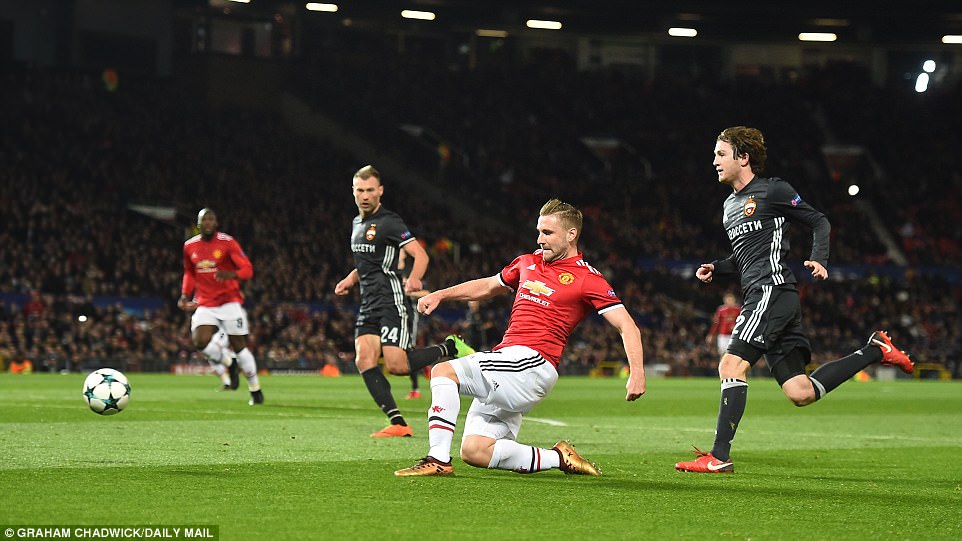 Shaw, whose fitness has often been questioned, impressed in the first half with attacking runs from left back 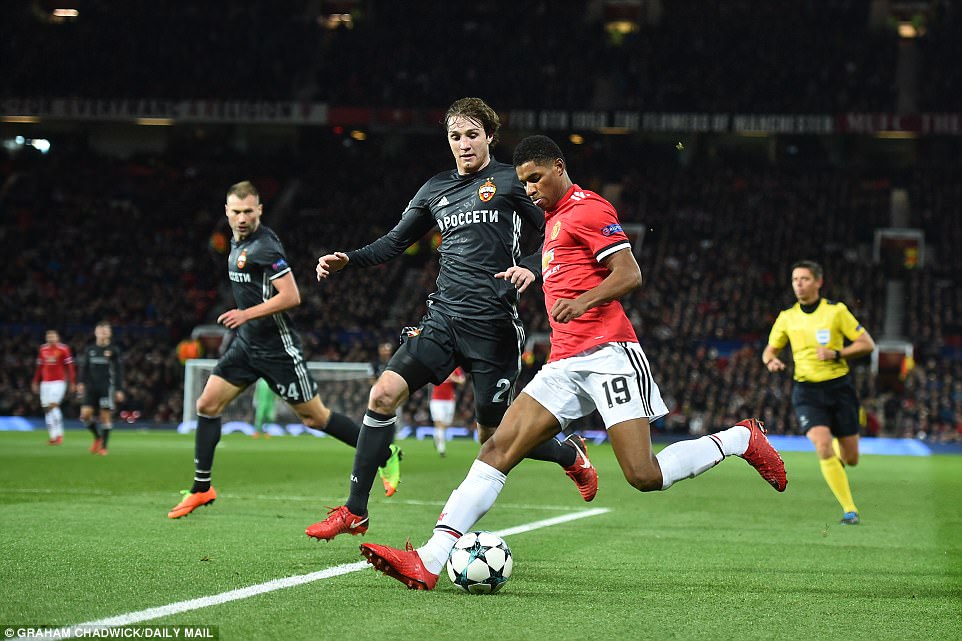 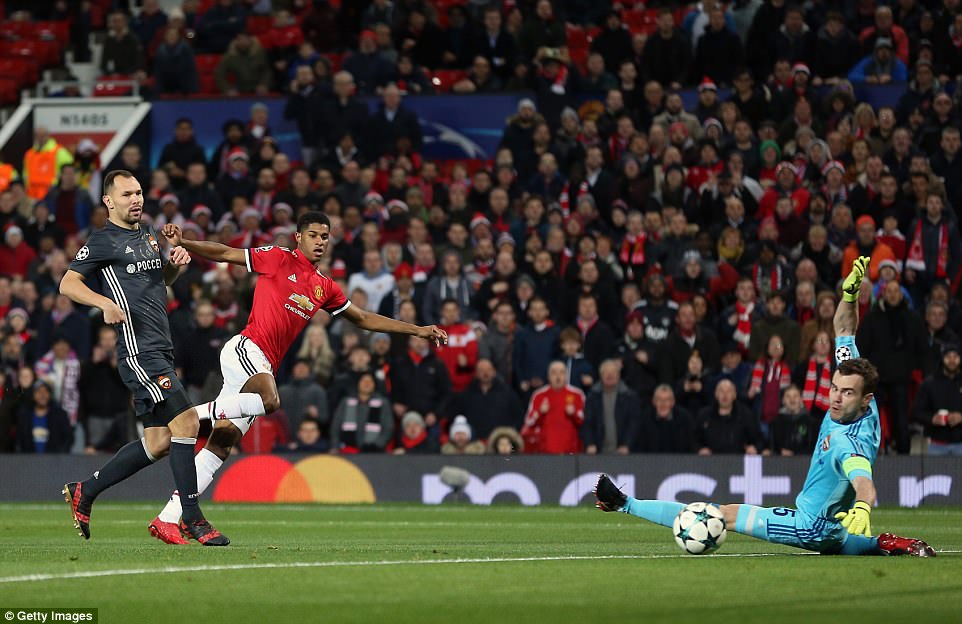 Rashford had one of the clearest opportunities in the first half for United, but saw his low effort rebound off the post and away

It was a fair decision. FIFA rules state that a ‘defending player’ – Blind – who leaves the field ‘without the referee’s permission’ is deemed to be ‘on the goal line or touchline for the purposes of offside until the next stoppage in play.’

The Russians did not look like adding to their lead and United could have been on level terms within minutes of the re-start when Mata sent a ball across the Russian area which Chris Smalling could not convert. The goals came soon later and Pogba’s contribution to the first of them was part of a virtuoso display, before he disappeared to serve his three-game suspension.

United might not be the most naturally creative side within these shores but they have rediscovered that capacity to get the job done. They will be a good side to avoid, come next spring. 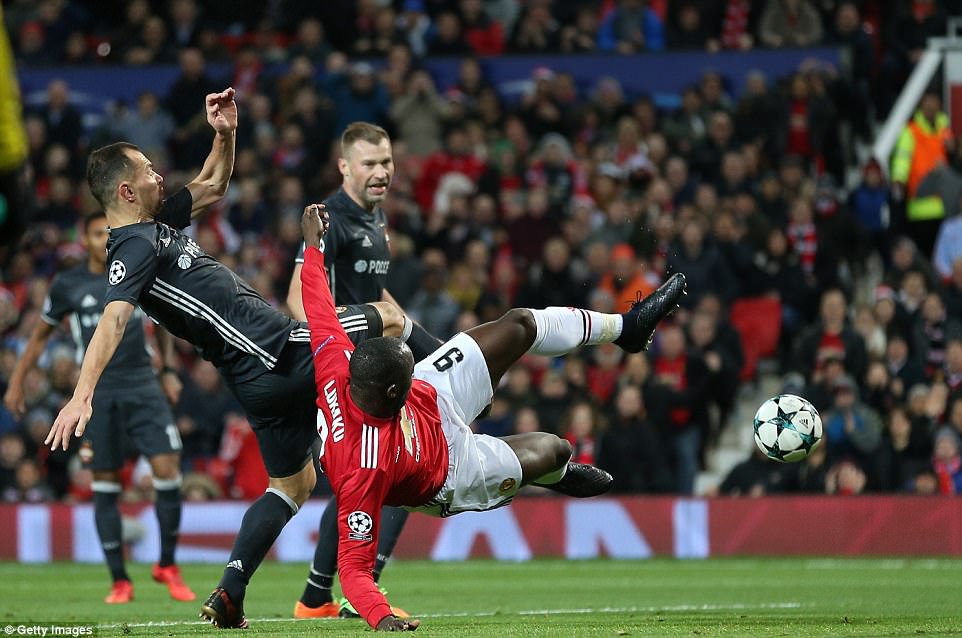 Lukaku attempts an acrobatic effort on goal, however he found all his first half opportunities denied by CSKA 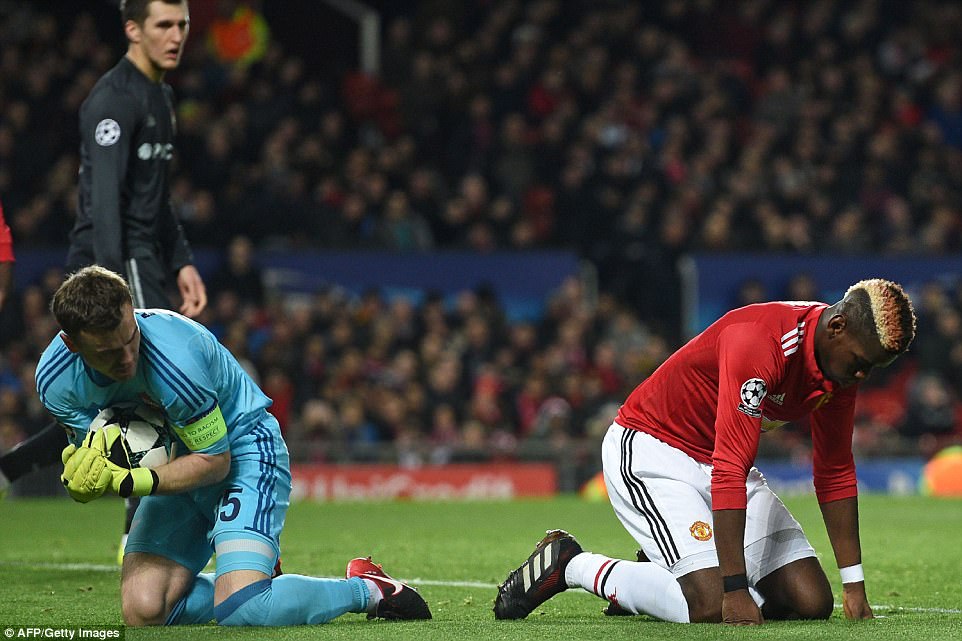 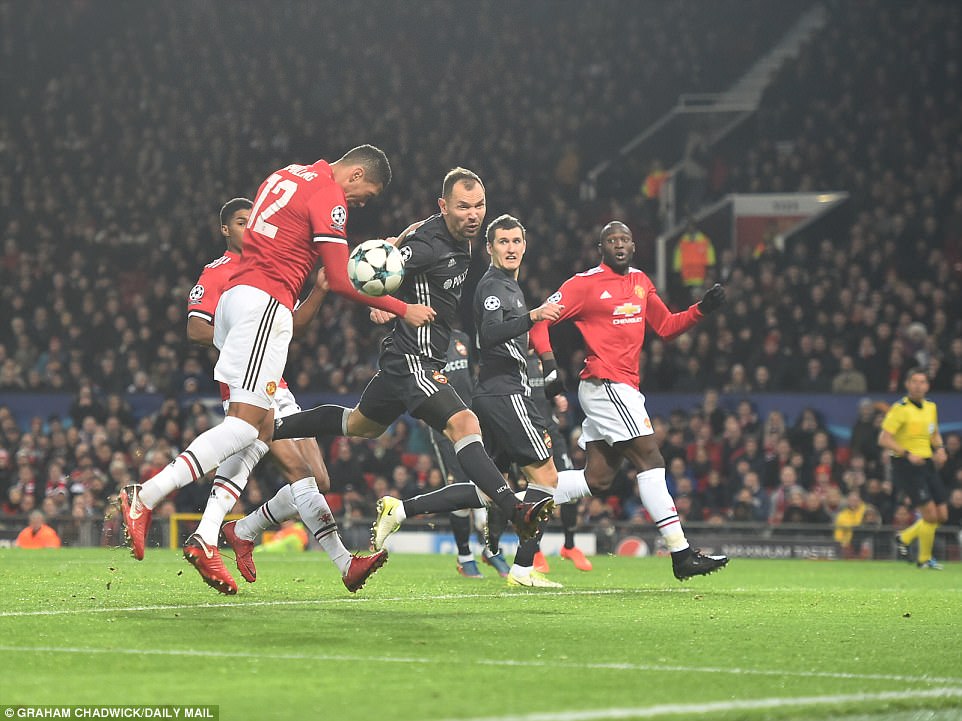 United continued to pile the pressure on the CSKA goal after the interval, Chris Smalling missing a header from a cross 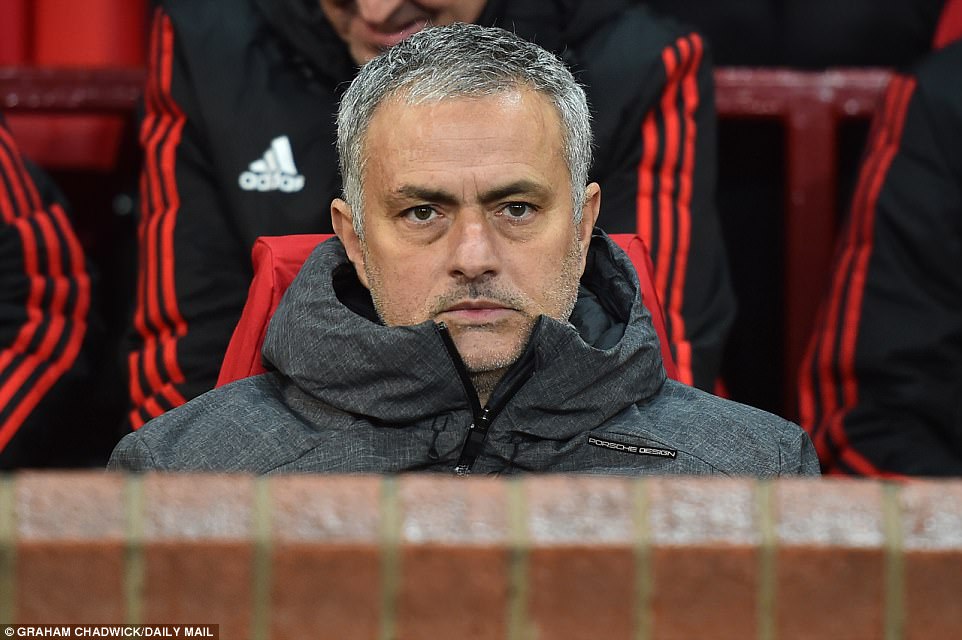