Man Utd keeper Emily Ramsey talks to ME & MY MONEY

She told Donna Ferguson it is time for men’s and women’s football to be treated more equally. The 20 year-old, currently on a season-long loan at Birmingham City, has already bought her first home and started a pension.

She is working in partnership with NatWest to help young adults develop good savings habits and shares savings tips on her Instagram account EmilyRamsey13.

To save and to be careful. Both worked for the police. My mum had quite a good job in forensic science, so money was never tight. My dad was a police officer who eventually became a forensic scientist. Even though I guess they could have afforded it, I didn’t get loads of things bought for me. If I wanted something, I would either have to wait for my birthday or save up by doing little jobs. They taught me to be a saver.

No, but in women’s football the pay isn’t like the men’s. I’d say it’s like a normal job’s pay. I make enough to live on, but not to have a lot of luxuries. Much of my income goes towards my bills and mortgage, so I have to be smart and prioritise my spending to make ends meet. Mind you, I’m a young player, so my pay is lower than more experienced players. But I’d imagine most players in the Women’s Super League earn around £30,000 a year, and some will definitely earn less.

No – and I’m aware that if a male footballer was asked that question, they would probably answer yes. Quite often, people who don’t know much about women’s football assume we earn crazy money. But we don’t. Maybe one day we will. But I don’t think female players should ever be paid the kind of money male footballers get paid. I think their pay has become too inflated. But the pay gap between men and women needs to be closed. We need women’s football to be treated equally by sponsors and to get TV coverage like men’s football.

Women’s football is a sport that people want to bring their kids to watch – it’s really engaging for families. I’d also say we have a slightly different mentality to the men: lots of hard work and less showmanship.

This year, probably. I am still at the early stage of my career, but I have a great agency looking after my interests – Forte Football Management. I’m starting to grow my brand and work with companies such as NatWest, and develop the commercial side of my career. Of course, all of this is happening as I push on with Manchester United and enjoy my season-long loan at Blues Women in Birmingham.

Most expensive thing you have bought for fun?

I’m always buying trainers and designer shoes. The most expensive pair of shoes I bought were some black Alexander McQueens for £400 a few years ago. I bought them on impulse.

Probably not saving as much as I should have done when I was 18 and got my first contract with Manchester United. I was earning a decent wage for my age, living at home and the only outgoing I had was my car. But instead of saving as much of my disposable income as possible, I spent some of it on shopping and going out with friends.

Using the money I did save, along with a sum my mum had saved for me, to get on the property ladder this year. I bought a two-bedroom flat in an up-and-coming area of Manchester, not far from where I grew up. I’m aware that 20 is a young age to buy your first home, but my parents encouraged me to do it. I don’t actually live in my flat right now because I am sharing a house in Birmingham with two other players. But I stay in my flat when I go back to Manchester.

Yes, I have a private pension which was set up by Manchester United when I was 18. Not that much money goes into it, but I guess it all counts and will build up over time. I think pensions are a good way to save because your employer also contributes and your payments are tax-efficient. I plan to put a bit more in each month when I have a bigger disposable income. 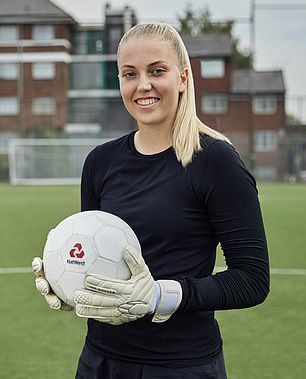 In safe hands:  Emily Ramsey has a private pension set up by Manchester United

Just my flat. I bought it for £105,000. I wouldn’t be surprised if it’s already gone up in value due to the improvements I’ve made. Buying during the pandemic was difficult. I was able to view it wearing a mask, but had to increase the size of my deposit because the banks needed more security from buyers at the time. The paperwork from the solicitors didn’t come through for a long time. It took me about six months to buy when it should have taken a few weeks.

Luckily, I wasn’t in a chain, but being quite young and working in football, I am only on a short-term contract. Not every bank is willing to lend to you in that situation, so applying for a mortgage was quite stressful. I was keen to move out of my parents’ home and get my own space because my mother is high risk for Covid. I was concerned about the fact that I was going to training and playing games against people, and potentially bringing the virus back home. Thankfully, I never did.

Chocolate. As a footballer, I have to be sensible about my diet and eat a lot of food that will fuel me for training. But every now and again, when it’s not going to affect my performance – such as after a match – I’ll treat myself to something nice to eat.

To gain financial stability. I’m aware that at some point I could get injured or my club may not want to re-sign me – and I will not be sitting on the millions that many male professional footballers would have banked. So my plan is to save and build a financial safety net for myself which I can fall back on if I need to in the future.