Man walking his dog was racially abused in Mickleham, Melbourne by his neighbour

A bizarre clash between dog-walking neighbours descended into a barrage of racial slurs and vile sexual gestures as they confronted each other in the street.

Max Vasic took his dog for a walk on Thursday evening in Mickleham, in Melbourne’s north when he crossed paths with his neighbour.

He claimed the man’s large brown canine had tried to attack his dog in the street.

Mr Vasic requested the man put his pet on a leash which triggered a heated exchange of words that was captured on video.

He shared disgusting footage of the argument online showing his neighbour spitting out vile language while grabbing his genitals.

The video starts with the neighbour aggressively walking toward Mr Vasic and telling him to suck his d***.

‘Why is your dog out everyday? Do you want my dog to bite your dog?’ Mr Vasic asks as the neighbour continues to hurl abuse at him.

The neighbour then bizarrely places his hands in his pants and shakes his genitalia asking ‘you want to see this’. Mr Vasic immediately puts his hand out and tells him to ‘show it to all his neighbours’.

‘Let’s act like neighbours, are you going to have your dog running out again,’ he asks repeatedly.

The agitated neighbour stares intently before telling him to ‘peace out n*****’.

Mr Vasic questions his angry neighbour as to why he used that highly-offensive term.

He ignores the question and comes closer to the camera telling him to get the phone out of his face.

Mr Vasic once again asks if he would be letting his dog out without a leash again to which he is just told to take the phone out of his face. 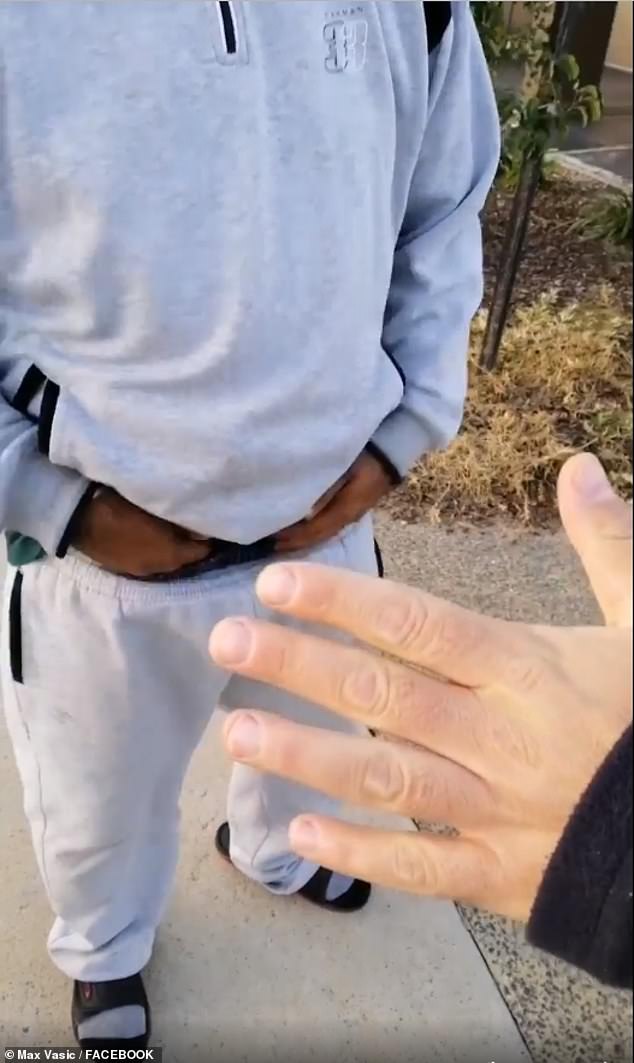 The man finally begins to walk away and Mr Vasic calls out to him saying, ‘aren’t you cool walking around being racist. Go home’.

He is met with applaud from the aggressive neighbour as the video ends.

‘This muppet lets his dog out running every night in my street,’ Mr Vasic captioned the video.

‘His dog tried to come and attack mine. Mine is leashed, very protective and will bite. This is what I get for telling him to keep his dog on a leash.’

The video has received more than 1,700 likes and shared 1,200 times on social media.