A video that show a man with a knife stuck in his scalp is going viral after the stabbing victim is seen casually walking up to a Fire Department New York truck to get help.

According to police the 36-year-old man was attacked at 11.56am on Tuesday near 120 West 125th Street in Harlem, after having a verbal dispute with an unidentified assailant.

He was defending a 24-year-old woman who was slashed in the cheek.

A 36-year-old man was stabbed in the street in Harlem on Tuesday at 11.56am after a verbal dispute with an unidentified assailant

The man is seen wearing a white tank top covered in blood that appears to be dripping down his neck and onto his dark blue jeans.

A piece of fabric is tied around his right arm and both of his hands are covered in bright red blood.

The victim grimaces as a crowd gathers around to film him. The incision did not penetrate his skull.

An amateur videographer who circulated one of the videos on social media is heard saying ‘he got stabbed’ and that ‘it’s crazy out here’.

The man, captures everyone’s attention as is seen by a paramedic in opposite a 99 Fresh Pizza and Fries restaurant.

He was taken to a hospital in Harlem.

The attacker also slashed a 34-year-old woman in the cheek.  Both victims were in stable, non life-threatening condition.

Police did not have an ID for the suspect on Tuesday evening. They are still investigating.

Ed Mullins of the Sergeants Benevolent Association reacted to the video in a tweet on Tuesday: ‘NYC politicians have lost control of the city. One day a homeless man is set on fire in Manhattan another day a man is knifed in the head, all on the heels of 125 shootings in one month.’ 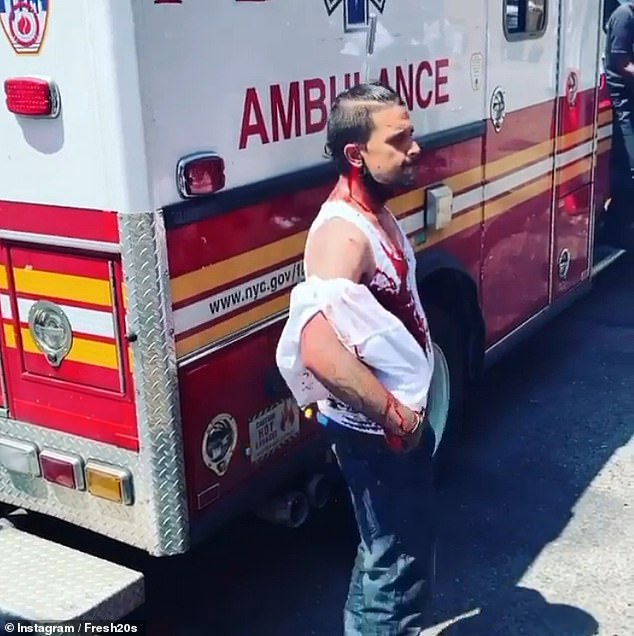 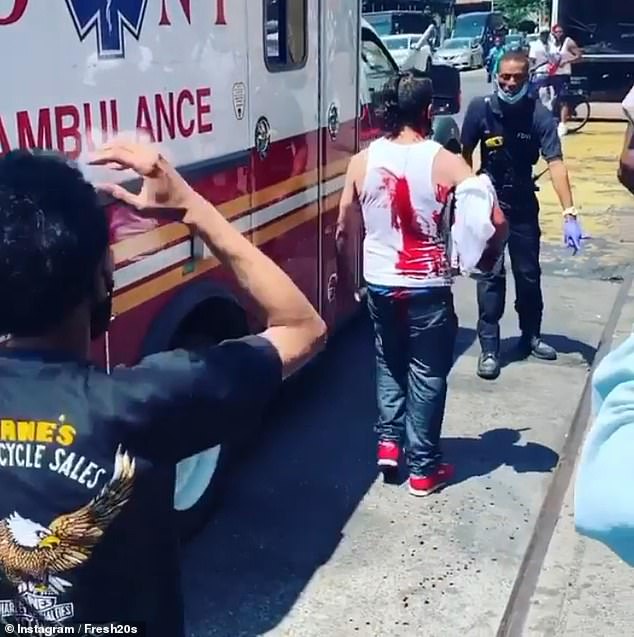 He was treated by EMS and transported to a Harlem hospital. Both he and the 24-year-old female victim were in stable, non life-threatening condition

He then blamed New York City Mayor Bill de Blasio and NYC Council Speaker Corey Johnson, saying: ‘Take a bow you created this, now own it.’

He made the comments after New York had gone to the polls ahead of the 2020 presidential election.

His Association is comprised of approximately 13,000 active and retired sergeants of the NYPD.

He shared the clip after there were 28 shootings with 38 victims, two of them killed, in 72 hours over Father’s Day weekend. The city statistics brought the total to 125 shootings so far this year.

The numbers from the NYPD also show a 414 per cent increase in the total number of people shot between last Monday and Sunday – 74 compared to 14 in 2019.

The Bronx was hit the hardest by instances of gun violence over the weekend; Brooklyn was the site of four of the shootings, with Queens logging two shootings and Manhattan one, according to NBC New York.

New York City was only one of several major US cities that saw a sharp spike in shootings last weekend.

In New York City, numbers for the first three weeks of June paint a similarly troubling picture, with a total of 125 shooting incidents reported across the five boroughs.

‘We have to go back to June of 1996 to get a worse start for June,’ Chief of Crime Control Strategies Michael LiPetri told The New York Post on Monday.

New York City Mayor Bill de Blasio addressed the uptick in shootings, which he characterized as a ‘troubling trend,’ during a press conference on Monday.

‘We’re not going back to the bad old days when there was so much violence in this city,’ he said, referring to a time during the 1990s when New York City was notorious for its skyrocketing crime rates. ‘We are not going to allow gun violence to continue to grow in this city.’

However there has been a 2.5 percent decline in overall crimes for the first five months of 2020 (34,773 v. 35,651), driven by decreases in the numbers of robberies, assaults and grand larcenies since the COVID-19 outbreak in mid-March.