#notRambo: Man, 36, wanted for selling meth attempts ‘movie stunt’ escape from cops by hiding underwater in a pond – and is arrested when he comes up for air

A Florida man who was wanted for allegedly selling methamphetamine tried to avoid arrest by holding his breath as he hid underwater in a pond while deputies searched nearby.

Daniel Christopher Booth, 36, of MacClenny, Florida, was at work on Wednesday morning at a solar power plant in Suwannee County.

But when a sheriff’s deputy arrived at the plant, Booth decided to make a run for it, according to the Suwannee County Sheriff’s Office.

He saw a nearby pond and decided he to try to evade arrest by hiding underwater. 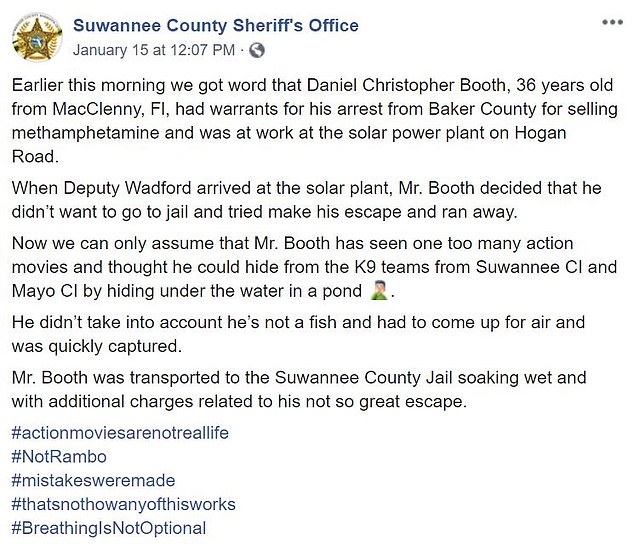 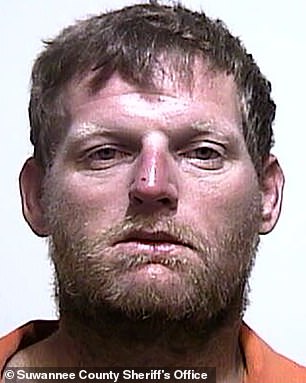 In 2013, Booth was sentenced to 20 months in prison for selling methamphetamine

But there was no escape from canine units deployed by law enforcement officials who quickly tracked him down.

Booth ‘didn’t take into account he’s not a fish and had to come up for air and was quickly captured,’ the Suwannee County Sheriff’s Office said.

The sheriff’s office posted a photo showing a deputy escorting a handcuffed and shirtless Booth out of a wooded area near the pond.

In 2013, he was sentenced to 20 months in prison for selling meth and other related charges.