A man who noticed his friend’s sister uploading photographs of him on her Instagram account has asked if it would be ‘overdramatic’ to insist that she removes the images.

Posting on Reddit, the man, who lives in the UK, explained that he has been spending a lot of time at his friend’s house to help with wedding arrangements, however his friend’s sister has been consistently taking photos of him.

He said that after the 32-year-old insisted that he follow her on Instagram, where he then discovered she’s been sharing the photographs of him with her large following and penning captions such as ‘My bro’s mate looks like a skinny Henry Cavill’.

Admitting that he feels uncomfortable, commenters urged him to have a word with the sister, but pointed out that it sounds like she may have a crush on him, so he should tread gently.

The man confessed that he’s torn about confronting his friend’s sister although he wants the photographs removed from social media.

He explained the situation, saying: ‘Would you ask someone to remove photos they took of you unsolicited and posted on Instagram on multiple occasions?

‘Mate’s sister is Instagram obsessed. In fact the first time I met her she asked me if I was on Instagram and to follow her. I didn’t then I saw her a few weeks later the first thing she said was “You didn’t follow me on Instagram”.

‘Anyway I have been around my mate’s house a lot over the past few months as he is getting married and I am helping out (bride is insisting on an EPIC wedding day). When I’m sat there I can see her pointing her phone at me and giggling.

‘I logged onto Instagram and she had photos of me with the caption “My bro’s mate looks like a skinny Henry Cavill”. She has a lot of followers (as she has large “assets” which are half on show in all her pics) and there were a few comments on it.

‘I’m around the house again and again I see her pointing her phone at me and I just feel really uncomfortable. I log on to Instagram and there is a video this time where she is zooming in and out on my face a few times.

‘I should point out, this woman is 32-years-old!

‘Should I say something? Posting photos online doesn’t seem like a huge deal. But the captions and the fact random randy men from all other the globe see it, I feel really annoyed whenever I think about it. I wish I had said something when she looked at the photo and will do if if happens again. Or is that being overdramatic?’ 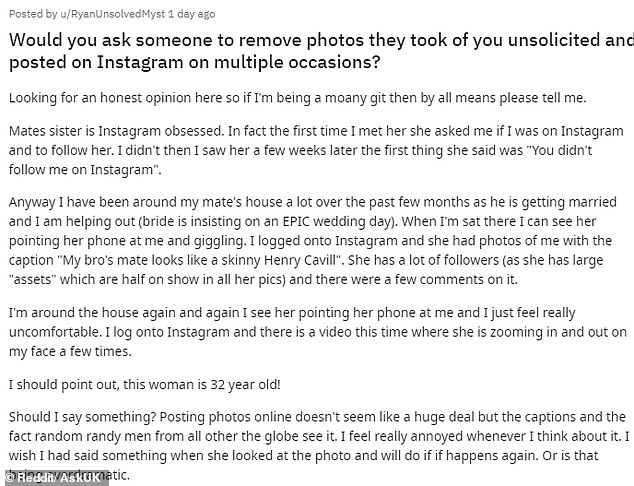 Posting on Reddit, the man explained his friend’s sister has been sharing photographs of him with her large Instagram following

The post quickly racked up almost 100 comments, with many people reassuring the man that they would ask for the photographs to be taken down from social media if they were in the same situation.

One person wrote: ‘Wow, did not see the twist of her being 32 coming. Genuinely thought this was a playful teenager. I think I would say something and ask her to stop and/or take them down. As you say it’s making you uncomfortable, and you haven’t given consent for those pictures. She shouldn’t use you for a quick joke online.’

Another said: ‘Making fun of someone for a quick giggle on Instagram is not on, unless it’s between two friends who are both ok with it. I’d certainly ask for it to be removed. If she doesn’t then getting anyone you know on the platform to report it might work.

‘It sounds like she’s so obsessed with posting things and getting social media engagement that it’s affecting her ability to behave like a decent person. It’s the sort of thing I might expect from a teenager but not a 32-year-old!’

A third added: ‘To go one step further, nobody has the right to take photos of you without your consent. Definitely tell her to stop and remove the photos already taken, and explain that if she doesn’t respect your wishes then you will have to involve the police as you deem it as harassment.’

While the majority of responses were adamant the photos should be removed, others argued the man shouldn’t complain because it’s likely his friend’s sister is just expressing a crush and will eventually stop the posts.

‘Is it worth an argument, disagreement or confrontation? She’s likely to get bored and move on with her life before long,’ one wrote.

Another said: ‘Sounds like she has a childish crush on you maybe? I probably wouldn’t bother asking her to take them down, but would avoid her as much as possible and would cause drama. She loves attention so she might use it for that.

‘I don’t think she would take it well as she sounds like an idiot. Might be more fuss than it’s worth. But if it’s really upsetting you then go for it.’

A third encouraged the man to get revenge, saying: ‘Wait for the wedding then take some embarrassing ones of her. Post them on Instagram.’