Jonathan Sword, 55 has avoided jail after carrying out a sex attack on a 14-year-old girl

A former army sergeant major who carried out a ‘terrifying’ sexual assault on a 14-year-old girl has avoided jail because of his exemplary military record.

Jonathan Sword, 55 molested the young girl after pulling down her tights and pushing her onto a table before telling her not to tell her mother.

Sword, who previously managed a children’s party company, thrust his groin against the victim’s in an assault she ‘fears she will never recover from’.

He denied a charge of sexual assault but was found guilty by a majority verdict following a trial at Worcester Crown Court.

Despite having previous convictions for downloading indecent images of children and possessing extreme pornography the defendant was spared jail on Wednesday.

The court heard Sword, from Halesowen, West Midlands, had shown remorse and had an ‘exemplary military record’ having reached the rank of sergeant major with the Royal Armoured Corps.

Sentencing, Judge Nicholas Cole said of the attack, which happened between the end of 2010 and beginning of 2011: ‘She was naturally terrified.’

Prosecutor Daniel White, told the court: ‘She was pushed onto a table. He pulled down her tights or leggings and thrust his groin area towards her groin area.’

Mr White said the attack lasted three seconds and later he followed her and told her not to tell her mother.

He added: ‘This was an aggravating feature.

‘It has affected her so deeply she feels she will never recover.’

The victim, who cannot be identified, said in a victim impact statement the incident had affected her trust and capacity for intimacy and she was ‘no longer as outgoing’.

Sword was the manager of a Scalextric Circuit attraction providing entertainment for children’s parties and also worked at a funeral parlour.

The court heard during his time as a mortuary worker concerns were raised about his behaviour and his laptop was seized by police.

Officers discovered collection of 252 indecent images and 59 videos, some at category A – the most serious level.

The videos showed a sex act being performed on a dead body in a mortuary and images of a female being tortured and raped.

It was a report of this case in a local newspaper that persuaded the complainant in the sexual assault to come forward. 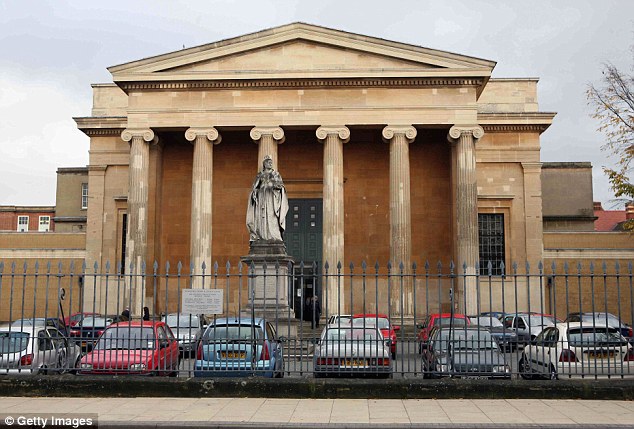 Mr White said the officer who had to view the material described it as ‘a very disturbing collection indeed’.

He was convicted of six counts of making indecent images of children and two of possessing extreme pornography between December 15, 2012 and May 25, 2016

The sexual assault happened before these offences so the judge could not activate the 16 month sentence suspended for two years which was imposed in October 2016.

Charley Pattison, defending, said: ‘His remorse is born of the effects and consequences his actions have had.

‘I would advance on his behalf remorse as a mitigating factor.’

She said Sword had been in contact with the Lucy Faithfull Foundation and had been identified as being at a low risk of reoffending.

She revealed her client suffers from post-traumatic stress disorder and had the support of his partner and son.

He was handed a 20 month prison sentence, suspended for two years and ordered to complete 150 hours of unpaid work.

Sword was also given a 30 rehabilitation activity days and told to pay a contribution towards costs of £1,000.