An Australian engineer convinced he is the love child of a young Prince Charles and Camilla Parker Bowles thanked well-wishers for their ‘beautiful’ messages on Mother’s Day – claiming he knows the Duchess ‘shares his pain’ at being separated.

British-born father-of-nine Simon Charles Dorante-Day, 55, who now lives in Queensland, insists he is related to the royals and has said a number of times that he would like a DNA test to prove his family link. Charles and Camilla have never responded to his claims.

It comes amid claims another Australian gentleman living in Darwin believes he is the illegitimate son of Edward VIII.

Writing on Facebook yesterday, Simon said mothering Sunday is ‘always a hard day’ for him, and he feels the ‘pain’ of others who don’t have a mother to share it with.

Simon Dorante-Day, who is pictured with his wife Elvianna, often posts updates on his bid to be recognised by the Royal Family to Facebook 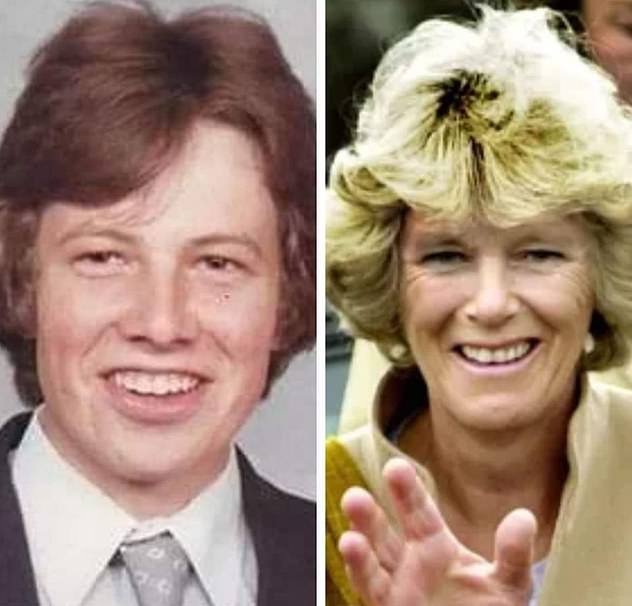 A comparative image of Simon Charles Dorante-Day (left) opposite the woman he claims is his real mother, Camilla, Duchess of Cornwall

He wrote: ‘It’s Mothers Day over here in Australia today… so a very Happy Mother’s Day to all of you who fulfil the role of mother wherever you are.

‘God gave me the best Mother for my children I could ever ask for, you will never know how much she’s done – Happy Mothers Day Dr. Sweetie [sic].’

Simon followed it up with a later post thanking social media users for their kind wishes, adding: ‘Always a hard day for me, you all certainly helped.’ 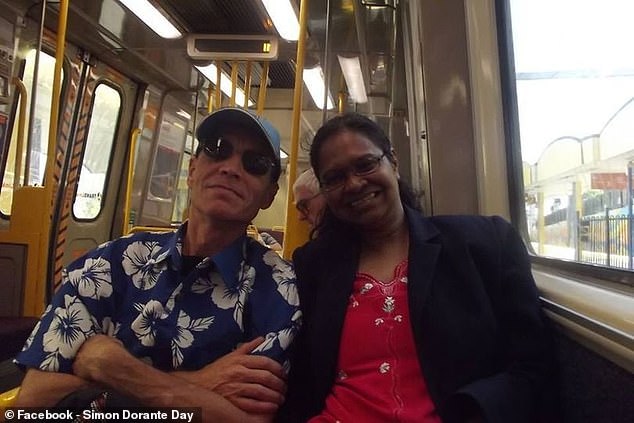 Simon said mothering Sunday is ‘always a hard day’ for him, and he feels the ‘pain’ of others who don’t have a mother to share it with (pictured with his wife in a photo he shared at the weekend) 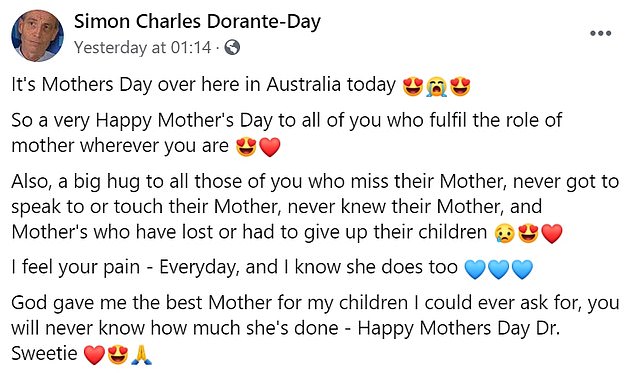 Simon followed up his initial post with a later comment thanking social media users for their kind wishes on Mother’s Day in Australia, adding: ‘Always a hard day for me, you all certainly helped’

This week Simon alleged there is another royal love child – reportedly the son of Edward VIII, fathered before he became king in 1936 and then abdicated to marry Wallis Simpson.

‘When Edward was still Prince of Wales, he had a reputation for going around the world womanising,’ Simon told 7news.

‘There’s a guy in Belgium, who believes he’s Edward’s son. He has photos where he looks very much like Edward – and me, actually – and I believe his story.’

Simon also claimed that Edward, then Prince of Wales, had an affair with an ‘indigenous lady’ when he was in Darwin, and allegedly talked about his mistress in a letter which he sent home.

‘There is a male who claims he is the child of that affair,’ he said. ‘Now he has family and he has children, and they’re all part of the indigenous community up in Darwin – I know a couple of those families. So I believe there are more royal love children.’ 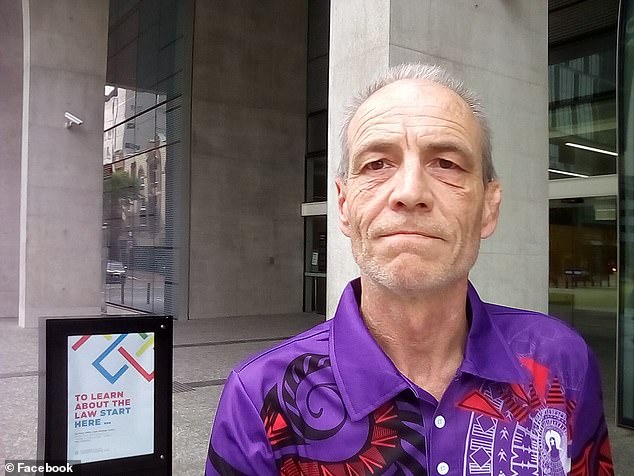 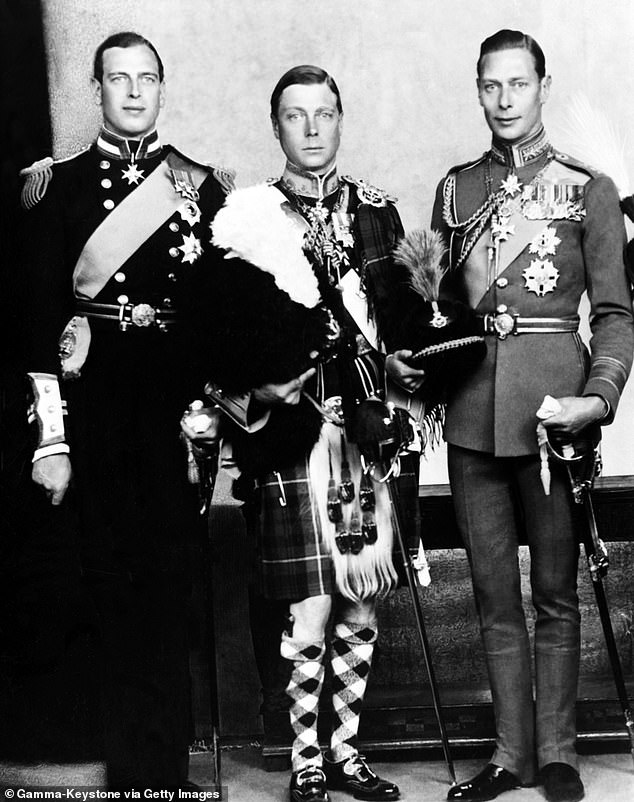 This week Simon alleged there is another royal love child – reportedly the son of Edward VIII, pictured centre in 1900 while Prince of Wales, fathered before he became king in 1936 and then abdicated to marry Wallis Simpson. Also pictured: Prince George aka future George VI (right) and Prince Henry, Duke of Gloucester (left)

Edward travelled to Victoria in May 1920, representing his father, George V and accompanied by Lord Louis Mountbatten, to thank Australians for their participation in the First World War. If he fathered a son, he would now be aged 100.

Simon was conceived in 1965 and born the following April in Gosport, near Portsmouth, five years before Charles and Camilla are officially thought to have first met. He claims that his adoptive grandmother told him the Duchess of Cornwall was his mother back in 1998.

Having since ‘done his research’, Simon is convinced he now has enough proof – along with his his ‘Windsor-like cheek-bones and teeth’ and ‘Camilla-style hair’ – that his claims are true.

He regularly shares photos of his children, often side-by-side to a picture of a Royal Family member, to ‘prove’ there is a likeness.

Simon has insisted he’s not ‘looking for a title’ or in it for the money – though he has recently set up a new business called ‘Royal Riffs’ selling handmade guitars ‘with that royal finish’ – and is ‘simply a man looking for my biological parents’. 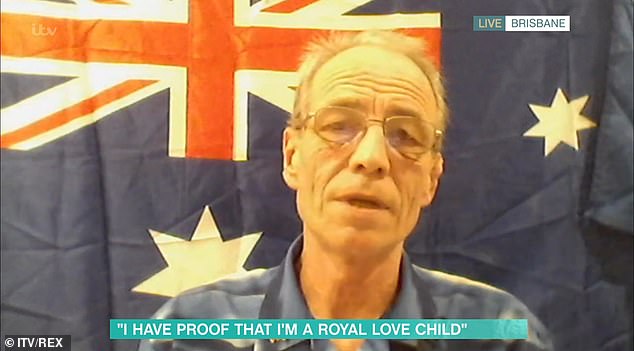 Simon, pictured during a recent appearance on This Monring, said he met with Camilla at different homes as a child, but remembers being at Broadlands multiple times

He has described childhood memories of being taken by his adoptive mother to meet the now Duchess of Cornwall at Broadlands House, a grand country manor in the English county of Hampshire. He said he remembered being left by his adoptive parents at the grand home.

‘I have very clear memories of both the inside of the house and the grounds,’ he previously told 7News.

‘As Nana said to my adopted mother “He’s too old, he’ll remember” – yes I do, quite clearly.’

Mr Dorante-Day said he met with Camilla at different homes as a child, but remembers being at Broadlands multiple times, and claimed to remember playing with toys as a child in the house, next to a woman with blonde hair whom he believes was the Duchess.

‘There’s a picture of Prince Charles from around that time with Camilla at the polo. And that’s the woman I see, who I see in that memory – Camilla,’ he said.

Broadlands was owned by Earl Mountbatten, Queen Elizabeth II’s cousin and an uncle of her late husband, Prince Philip. Her Majesty and the Duke of Edinburgh, and also Prince Charles and Princess Diana, spent their honeymoons at the home.

Camilla and Charles were romantically involved before and during that marriage and eventually married in 2005. 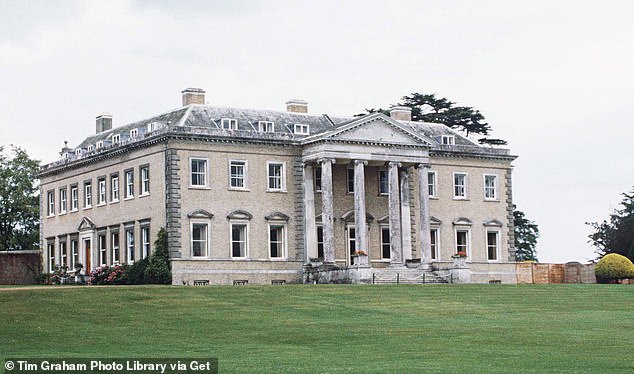 Simon claims he was taken by his adoptive mother to Broadlands, a grand Hampshire home inherited from Countess Mountbatten’s father, Lord Mount Temple to meet Camilla, whom he says was his real mother. Broadlands (pictured) was owned by Earl Mountbatten, Queen Elizabeth II’s cousin and an uncle of her late husband, Philip

Simon claims his research suggests Charles and Camilla first became close in 1965, with one report alleging he said they met at Winston Churchill’s funeral in January of that year.

Charles, who was born on November 14, 1948, was 16 when he attended Winston Churchill’s funeral, along with 6,000 other guests. It’s not known if Camilla Shand – then aged 17 – was among them, and there’s no evidence the two met at the event.

Simon asserted that, at the age of eight months, he was adopted by a local Portsmouth couple called Karen and David Day.

He claimed to have been told it was a condition of the adoption that his names Simon and Charles were not changed. He believes Charles and Camilla had a close friend called Simon at the time.

He said his adoptive grandparents, Winifred and Ernest Bowlden, had both worked for the Queen and the late Duke of Edinburgh, who died on April 9 aged 99, as a cook and a gardener in one of their royal households.

While his grandparents may well have worked for a royal household, Dorante-Day claims his grandfather Ernest Bowlden received an Imperial Service Award for his work for the Queen. However he does not appear to be listed on any of the Queen’s Birthday or New Year’s honours lists since her coronation in 1953.