A man who suffered a heart attack shortly after Hawaii mistakenly issued an alert about a ballistic missile threat is now suing the state.

James Sean Shields filed a lawsuit against Hawaii on Thursday, claiming the false missile alert and the state’s failure to cancel it in a timely manner was a substantial factor in causing his heart attack.

A Hawaii Emergency Management Agency employee mistakenly sent the missile alert to cell phones and broadcasters at 8.07am on January 13.

James Sean Shields and his girlfriend Brenda Reichel (pictured) have filed a lawsuit against Hawaii, claiming the false missile alert it sent out in January caused his heart attack

‘BALLISTIC MISSILE THREAT INBOUND TO HAWAII. SEEK IMMEDIATE SHELTER. THIS IS NOT A DRILL,’ the text message read.

A similar message flashed up on local television networks and brought live sports games to a halt.

The alert triggered widespread panic among residents, celebrities, and golfers on tour for the US PGA Tour’s Sony Open in Hawaii. 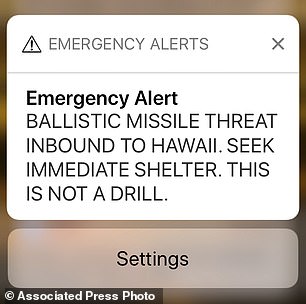 A Hawaii Emergency Management Agency employee mistakenly sent the missile alert to cellphones and broadcasters at 8.07am on January 13

Actor Jim Carrey, like many others, said he woke up thinking he had ‘ten minutes to live’.

Shields and his girlfriend were heading for a pleasant day at Sandy Beach on that Saturday morning when they received the alert on their cell phones.

They both believed the message was true and ‘were extremely frightened’ and thought ‘they were shortly going to die’, according to the lawsuit.

The couple decided that, if they were going to perish, they might as well die together on the beach.

Reichel’s son, who is in the Hawaii Army National Guard, called her saying the threat was real and asked what they planned to do to seek shelter.

The couple then called their loved ones as they drove to the beach. Shields began to feel a ‘severe and painful burning in his chest’ after he called his son and daughter. 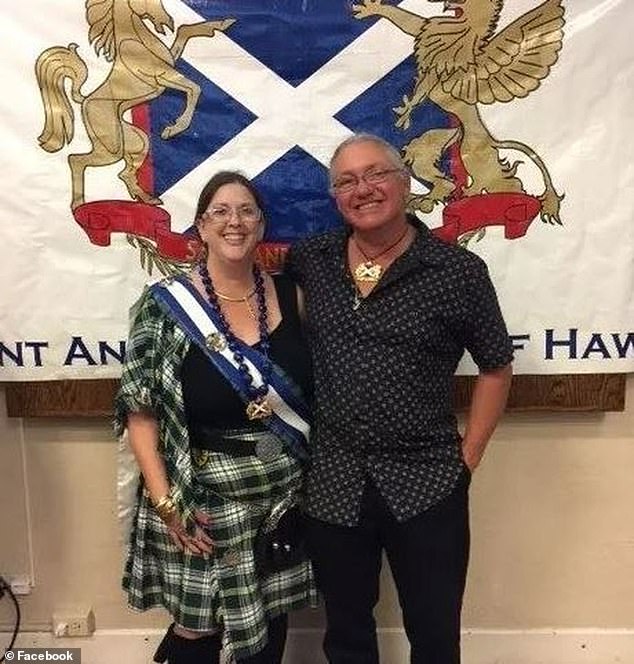 Shields filed a lawsuit against Hawaii on Thursday, claiming the false missile alert and the state’s failure to cancel it in a timely manner was a substantial factor in causing his heart attack 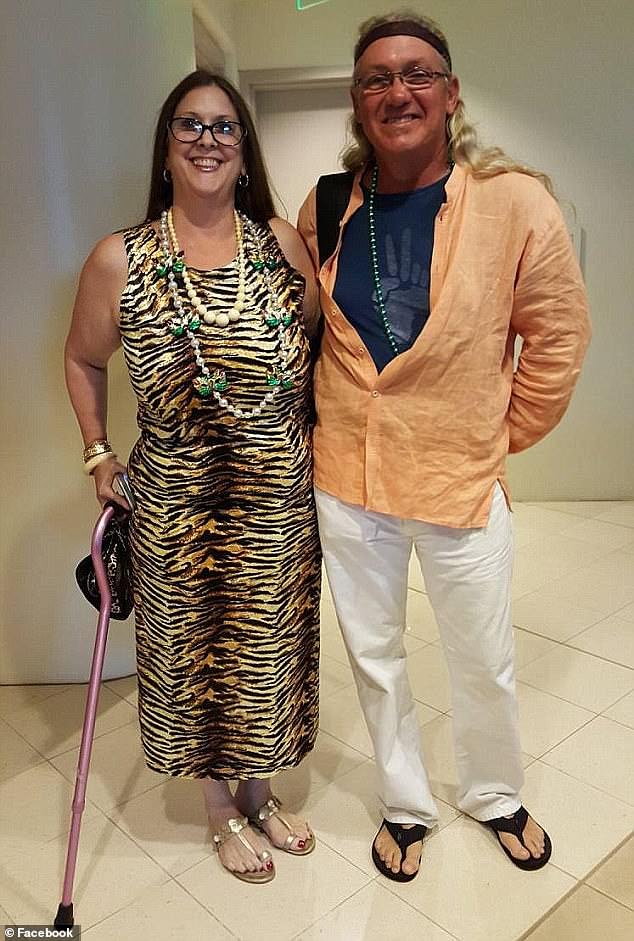 Shortly after, Shields went to a community clinic, where he suffered cardiac arrest.

Shields was taken to Straub Medical Center where he was diagnosed with a heart attack and had to receive life-saving CPR, defibrillation, and eventual surgery, his lawsuit states.

A doctor resuscitated him, while arriving paramedics assisted him further.

During the frightening ordeal, the couple had no idea that at 8.45am, a new alert had been sent out through the state’s Emergency Management Agency.

‘There is no missile threat or danger to the State of Hawaii. Repeat. False Alarm,’ it read.

It was quickly discovered that the false alert was sent out by a Hawaii Emergency Management Agency employee who ‘pushed the wrong buttons’ during an internal drill that had been timed to coincide with a shift handover.

Officials said the employee who made the mistake wasn’t aware of it until mobile phones in the command center began displaying the alert. 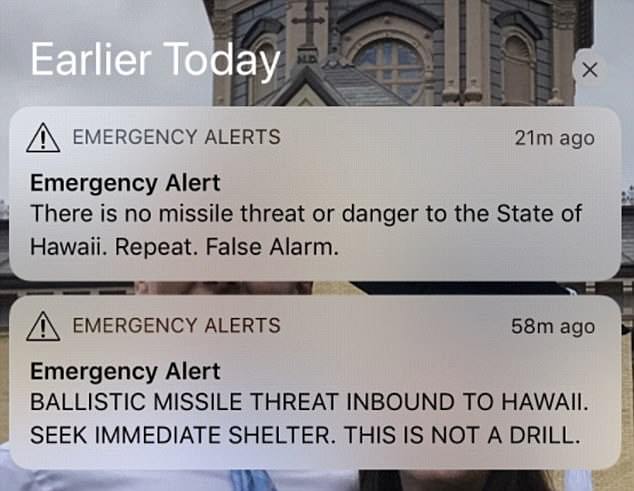 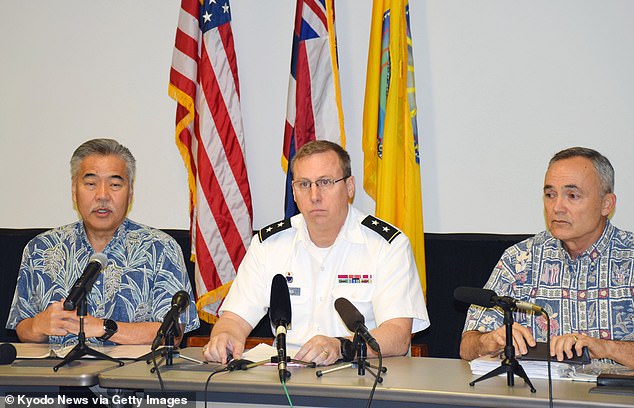 ‘This guy feels bad, right. He’s not doing this on purpose – it was a mistake on his part and he feels terrible about it,’ Vern Miyagi, then-administrator of the Hawaii Emergency Management Agency, said at the time.

Miyagi said the employee had been with the agency for ‘a while’ and that he would be ‘counseled and drilled so this never happens again’ – but stopped short of saying whether there would be disciplinary measures.

Hawaii Governor David Ige apologized to Hawaiians for the error.

‘I am sorry for the pain and confusion it caused,’ he said. ‘I, too, am extremely upset about this and am doing everything I can do to immediately improve our emergency management systems, procedures, and staffing.’

Shields’ lawsuit names the state of Hawaii and Miyagi as defendants.

‘We’re going to reserve any comment until we have had a chance to review the claims,’ said Richard Rapoza, a spokesman for the Hawaii Emergency Management Agency 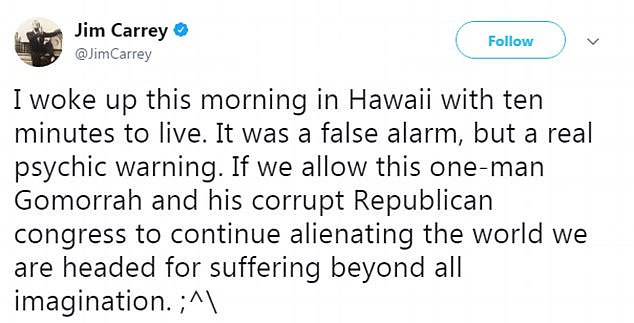 Actor Jim Carrey, like many others, said he woke up thinking he had ‘ten minutes to live’ after receiving the alert

State attorney general spokesman Krishna Jayaram said his office will review the complaint carefully and respond in due course. Miyagi declined to comment.

Shields’ lawsuit comes the same week the US Department of Homeland Security issued its recommend changes to the nation’s emergency alert system.

The report calls for mandating that software vendors include message preview and cancelling features in their alert software.

The agency issued the report after Sen Mazie Hirono of Hawaii asked it to examine the Federal Emergency Management Agency’s role in the false missile alert.

State emergency managers have already implemented a two-person verification for alerts and an automated all-clear signal that can be used in the future.