A man suffered from agonising foot pain so bad he went to hospital, only to discover he had a ‘hair splinter’ stuck in his heel.

The unnamed 35-year-old endured the discomfort for eight hours and found it made walking difficult.

When doctors in Brazil examined his right heel, they found a lock of hair had penetrated the surface of his skin and come into contact with a nerve. This is a medical condition known as cutaneous pili migrans (CPM).

The medics believe the patient ‘trampled’ on the hair while walking barefoot, which caused the strand to become ’embedded’.

The 1cm-long strand of hair was removed with tweezers, which immediately eased the man’s pain.

An unnamed man suffered from foot pain for years only to discover he had a ‘hair splinter’ stuck in his heel. The hair is shown as a faint black line below the white arrow in the red circle 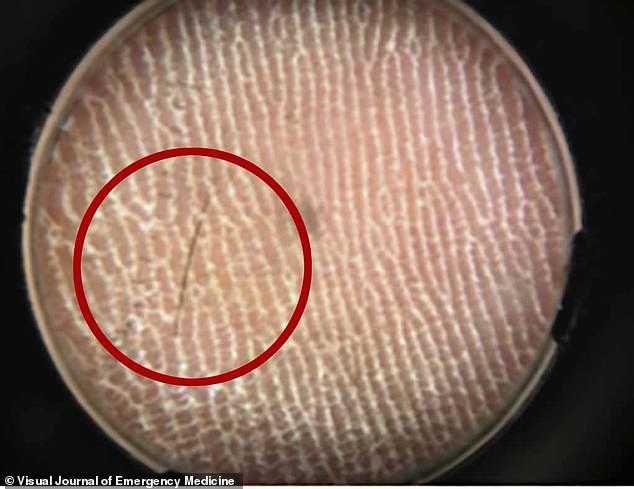 When examined under a microscope (pictured), the 1cm-long hair was found to be penetrating into the outermost layer of the patient’s skin. This is thought to have stimulated nerve endings in the thicker layer of skin deeper within his foot, which made walking painful

The patient, who was otherwise healthy, went to the University of São Paulo’s medical school when the pain in his foot worsened.

Dermatologists, led by Dr Fred Bernardes Filho, examined the patient, who reported having no foot or ankle injuries.

The medics found no signs of swelling or other ‘deformities’, they wrote in the Visual Journal of Emergency Medicine.

When the patient was asked to walk on his tiptoes and then his heels, he complained of pain at the back of his right foot.

WHAT IS CUTANEOUS PILI MIGRANS?

Cutaneous pili migrans (CPM) is a rare condition that occurs when a hair shaft becomes embedded in the skin.

This can cause pain, particularly when walking.

It is unclear exactly how many people suffer from CPM in the UK or US.

One study claimed that since CPM was discovered in 1957, only 26 cases have been reported.

It is said to be more common in people of Asian descent due to their hair being thicker and therefore more likely to penetrate the skin.

CPM is diagnosed by looking for a ‘creeping eruption with black-line like hair’.

This can be confused for the parasitic skin infection cutaneous larva migrans, which occurs when a hookworm larvae ‘migrates’ through the skin.

Unlike cutaneous larva migrans, CPM does not cause itching.

This prompted the doctors to re-examine the man’s heel.

They saw what looked like a hair ‘attached’ to the back of his foot.

The medics then looked at the affected area under a microscope, which revealed what a hair-like line beneath his skin.

The hair was removed, which immediately caused the man’s discomfort to cease.

The report’s authors wrote: ‘Complete removal of the hair is required for cure’.

The lock of hair is thought to have become embedded in the outermost layer of the patient’s skin after he trod on it.

This then stimulated nerve endings in the thicker layer of skin deeper within his foot, the medics claim.

The scientists said the man was white but added CPM is more common in people of Asian descent.

This is due to them having thicker, straighter hair that more easily ‘extends into the skin’.

The authors urge urge doctors to consider CPM if a patient presents with ‘discomfort on the soles of the feet’. 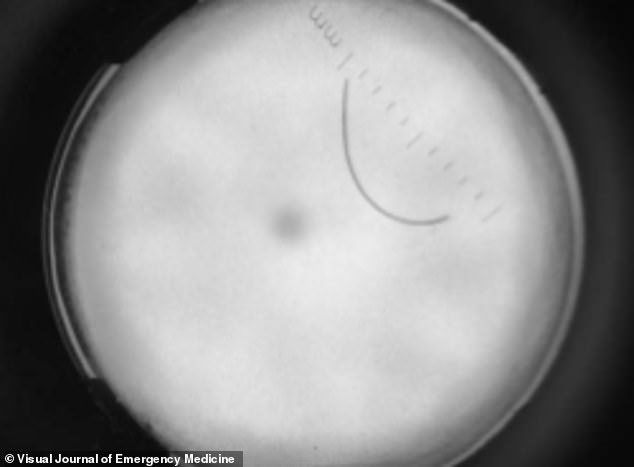 The hair is pictured after it was removed with tweezers, which resolved the man’s pain