A man who used to eat 10,000 calories a day has revealed he transformed his life with a grueling bodybuilding regime.

David Roden, from Michigan has gone from 60 percent body fat to just 15 percent in three years, and emerged with a much healthier mindset about his body.

The business owner and transformation coach, 31, shares inspirational videos about his journey on TikTok, where he has 100,400 followers, and often praises the power of slower, more consistent fitness.

The athlete revealed that he used to consume up to 10,000 calories per day. Now, the figure is closer to 3,400, and he’s able to deadlift more than twice his bodyweight. 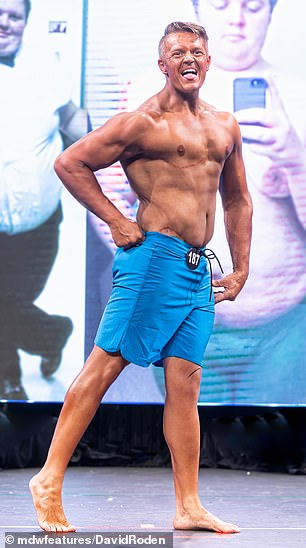 David Roden (pictured left before the weight loss, and right, after) was determined to transform his life through a grueling bodybuilding regime 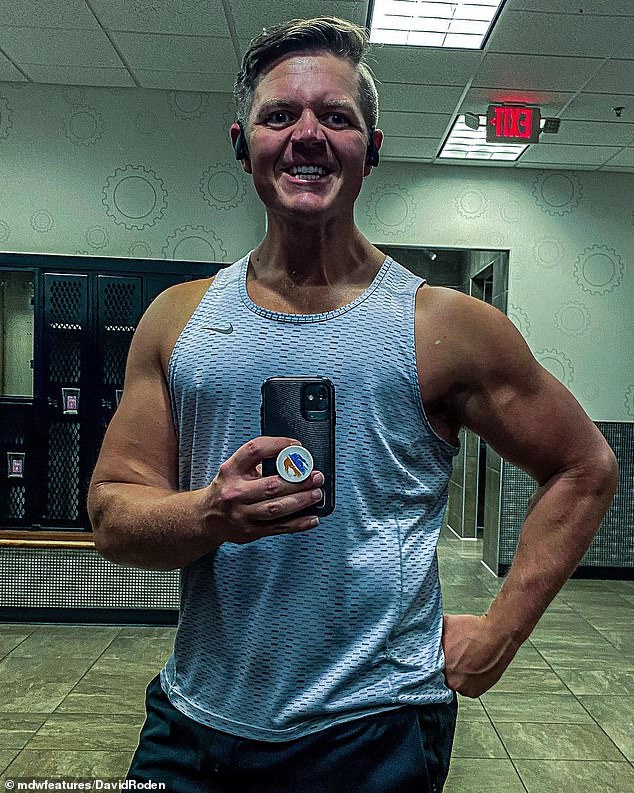 David (pictured), from Michigan has in three years gone from being 60 percent body fat to just 15 percent, and emerged with a much healthier mindset about his body

But most importantly, he has transformed his whole lifestyle and outlook.

David explained that despite growing up in a loving home, he developed an unhealthy attachment to food as a child.

As a young teen, the now-athlete spent years playing video games and eating until it got dangerous.

Aged 18, he weighed 392lbs and ate 15 Reese’s peanut butter cups per day as a snack, and before long he was diagnosed with pre-diabetes and high blood pressure.

David admits that he took on the role of the ‘fat funny friend all his life’ – but the jolly act was a cover for a much darker place mentally. 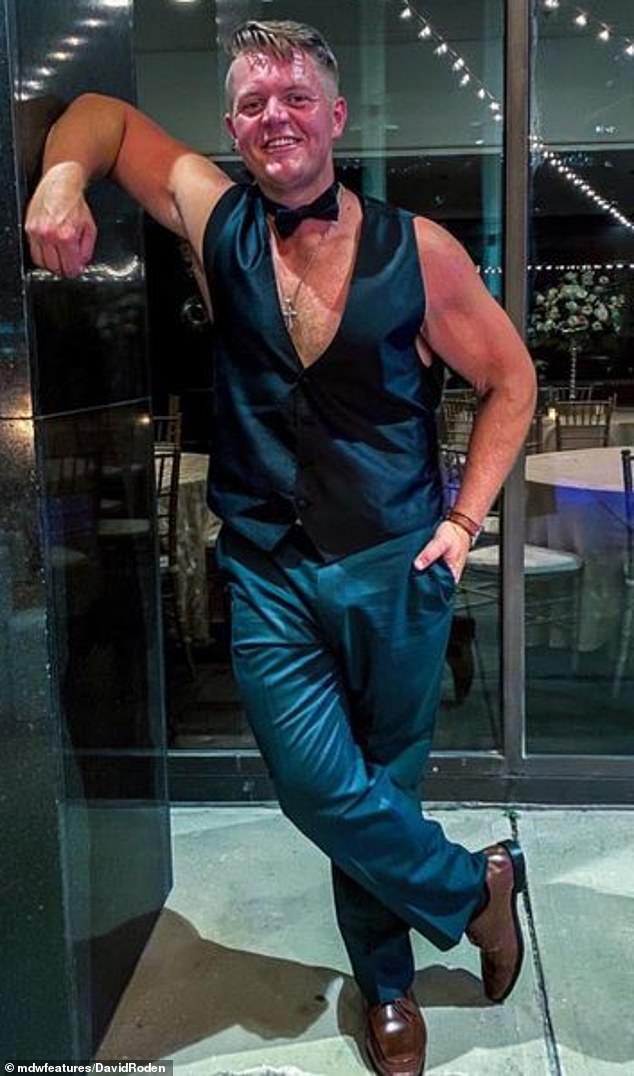 The business owner and transformation coach (pictured after his transformation) revealed that he used to consume up to 10,000 calories per day

He tried to take his life twice while in high school, remarking that he ‘absolutely hated his body’.

‘No one knew how depressed I really was,’ he said. ‘To the people around me, I was a funny fat kid. But to myself, I felt trapped in this obese body.’

As a young boy plagued by self-esteem issues, David said he was unable to see how loved he really was by family and supportive household – with many people who enjoyed his company.

He described his childhood as ‘ideal’ and with ‘all the resources you could ask for’, including a 7,000 square foot house with a full gym and indoor basketball court. 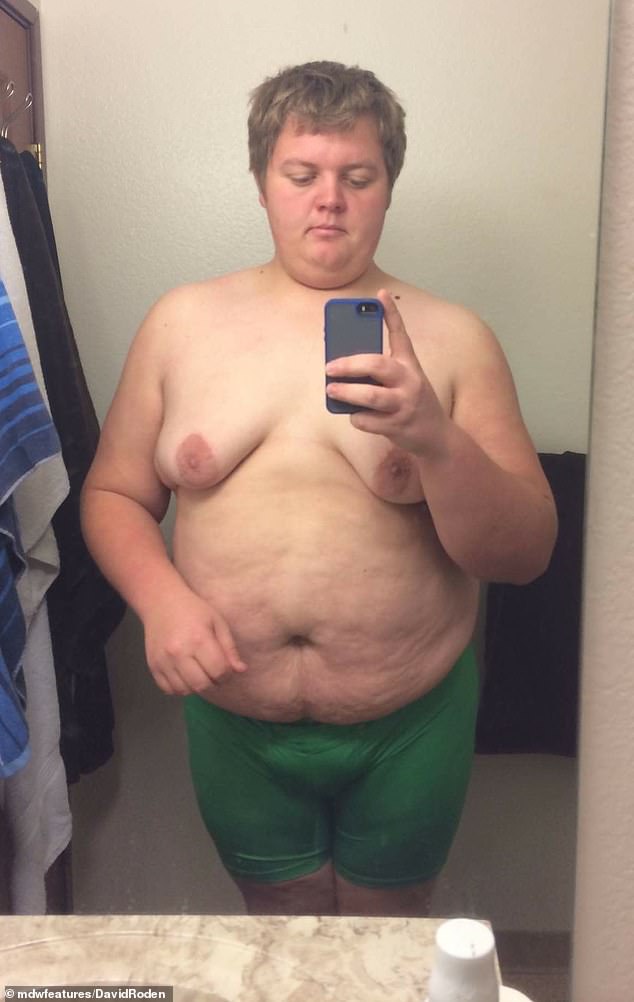 As a young boy plagued by self-esteem issues, David (pictured before his weight loss) said he was unable to see how loved he really was by family and supportive household

But it was still difficult to see past the pain he feeling emotionally.

‘I only saw all the pain and fear around being 400 plus pounds and being a failure,’ he added. ‘I hyper focused on the few things that were bad, making me lose perspective on how much of my life was great.’

David also admitted that he was his own harshest critic when it came to self-image.

‘The bullying I put on myself was way worse than anything someone said or did to me,’ he said. ‘I would say horrible things to myself, “Why can’t you change?”, “Why are you such a failure?”, “You are a fat loser.”‘

Relationships with girls were also not easy – and led to unhealthy coping mechanisms.

‘My self worth was very low and I struggled when every girl would reject me in dating,’ David explained. ‘Every time I would get the courage to try again it would end poorly and would put me back into a poor mental space. Using eating to deal with my feelings and playing more video games.’

Now, David has found inspiration in a new, health-focused routine – and says that it’s helped him ‘build a better relationship with himself and learn to hold himself accountable while treating himself with the respect he deserves’. 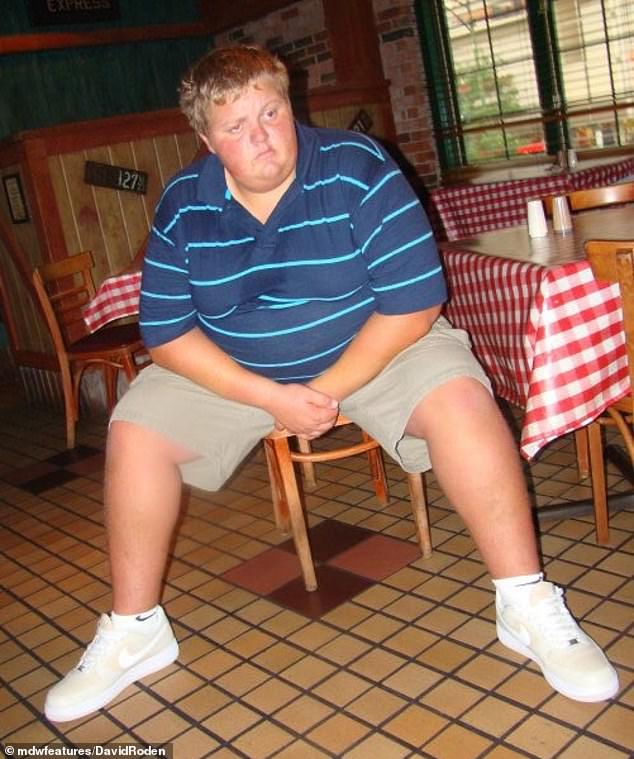 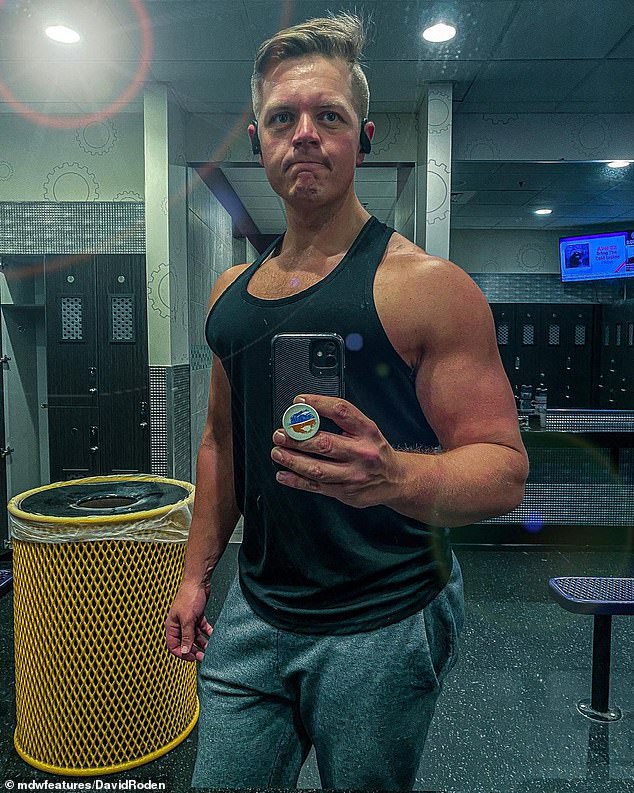 He cites meeting new people as getting him on track to recovery.

‘I was close to graduating from university. I decided medicine wasn’t my path. I was in a transitional time in my life. God placed new people in my life that inspired me beyond belief,’ he said.

‘They were big into personal development and reading books. The first book I read, The Compound Affect by Darren Hardy, really shook it up for me.’

David explained that he felt ‘trapped’ by the ‘astronomical idea of losing 200 pounds’ – but splitting the huge goal up into smaller tasks helped massively. 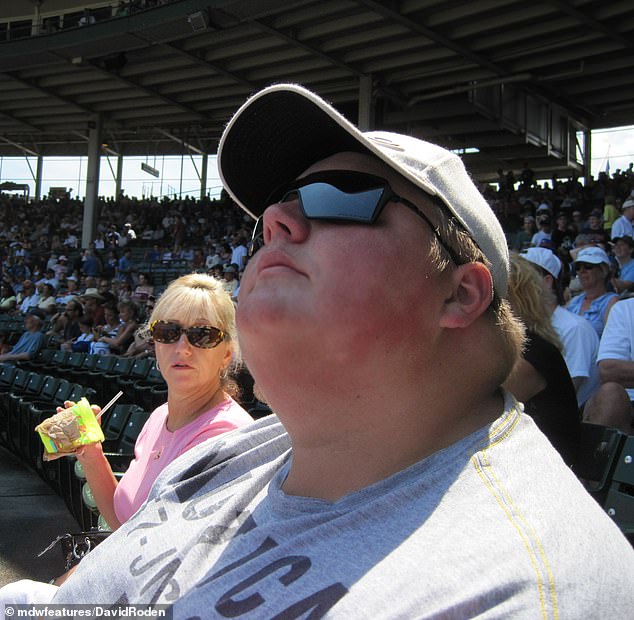 David (pictured when he was younger) says his life is changed thanks to the weight loss, and two excess skin removal surgeries – but explains that it’s much more than a purely physical change

Prepping for four-days’-worth of meals at a time also helped David have more control and consistency over what he put in his body as he focused on a ‘high protein lifestyle’ with more lean meat.

He would have one or two ‘indulgence’ meals a week  – and enjoy eating out with friends – and then ‘get right back on track’.

The journey wasn’t all smooth, and at times frustrating. David admitted that there were instances he’d want to speed up the process and drop his calories to 1,200 a day – which was simply ‘not sustainable’.

After losing his first seven stone, mostly through cardio, he got into lifting.

Now, he trains five to six days a week for around an hour and a half, ‘mostly focusing on strength training with some cardio’.

‘I can squat 300 pounds, deadlift 500 pounds and bench 300 pounds,’ he explained. ‘My focus is on volume and reps rather than power or max weights.’

David says his life is changed thanks to the weight loss, and two excess skin removal surgeries – but explains that it’s much more than a purely physical change. 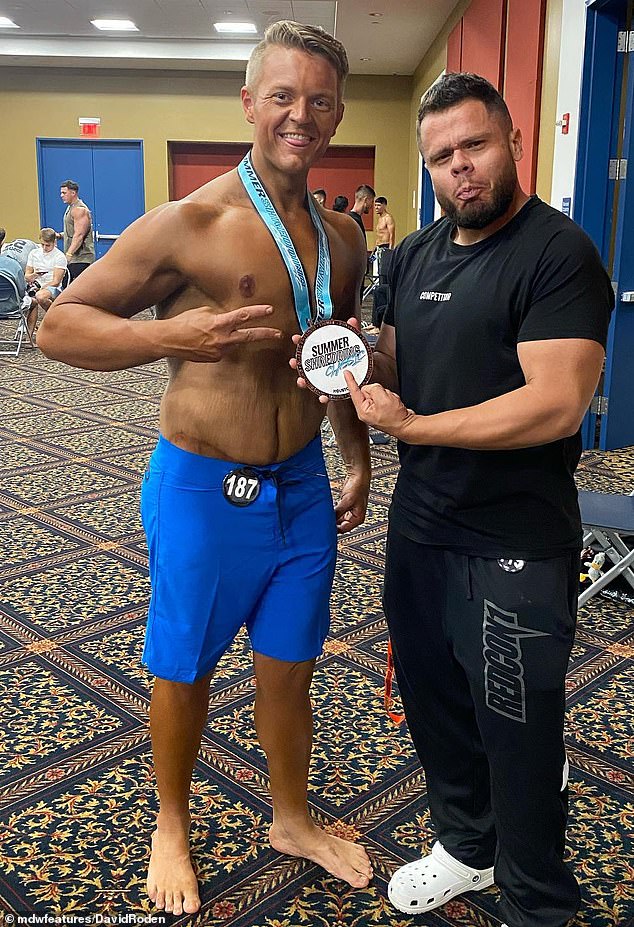 Sharing his tips for anyone who may be in the same place as him, David (pictured after his change) advises focusing on a healthy lifestyle rather than just shedding the pounds

He said: ‘I have reversed my pre diabetes and high blood pressure. I have been off all medications for almost six years now.

‘I love who I am. Not just my body but my mindset, my character. How I treat myself and how I treat others.’

Sharing his tips for anyone who may be in the same place as him, David advises focusing on a healthy lifestyle rather than just shedding the pounds.

He explained: ‘Weight loss is simple, building it into a sustainable lifestyle is the game. Changing your standards and disciplines.

‘Asking yourself, what do you value most? What are your top priorities?’

He warned against ‘diet rollercoaster’ strategies.

‘You have to understand you are changing for the rest of your life,’ he said.

David continued: ‘At the end of the day it’s about “eating less” and “moving more”. A calorie deficit creates fat loss. Focus on eating more protein and find fitness routines you enjoy.

‘And celebrate all progress. Nothing destroys progress faster than dismissing all the great progress you are making.’