Man who was arrested in shock peak-hour police raid had been ‘shot at and bashed’ in a children’s park just an hour before, as his attackers remain on the run

A shirtless man arrested in a dramatic police raid during peak hour in Sydney on Friday had allegedly been shot at and bashed just an hour earlier.

The 31-year-old man was forced out of his Greenacre home on Friday and handcuffed on the street following a shooting at a park in Punchbowl, but police now believe he was the victim, not the attacker.

The man had planned to meet two others at the park, and things took a violent turn not long after, Nine News reported.

The men allegedly fired shots at him near the children’s playground, then beat him on the streets.

He then left the scene in a silver Audi, which was tracked by police and returned to his home on Roberts Road.

Police arrested him but he was released shortly after.

The two men accused of attacking him remain on the run. 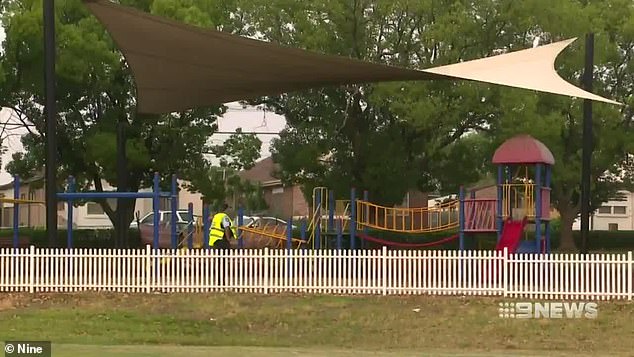 The incident raised major concerns as residents revealed similar incidents had occurred in the past and police had been warned about the dangers of the area.

Neighbours now insist authorities take action to ensure the safety of the neighborhood.

‘I’m really hoping that yesterday’s incident is a wake up call for the police,’ a resident told 9News.

‘They have to bring more patrols, more police presence in this area.’

A spokesman for NSW Police told Daily Mail Australia officers were still looking for the men.

Anyone with information is urged to contact CrimeStoppers on 1800 333 000.