A man convicted of supplying guns to the late former NFL star Aaron Hernandez has been arrested in connection with an attempted murder outside a restaurant.

He was a passenger in a car driven by his girlfriend when he allegedly targeted a man who has been accused of domestic violence against the woman, the Palm Beach Post reported.

His death came less than a week after he was acquitted of the murders of two Boston men in 2012.

He was already serving a life sentence for the 2013 murder of Odin Lloyd, a semi-professional football player who was dating the sister of Hernandez’s finance.

According to reports at the time, Oscar Hernandez said he was ‘awed’ by the former New England Patriots star when he sent him an assault rifle and a pair of handguns a month before Odin Lloyd’s killing. 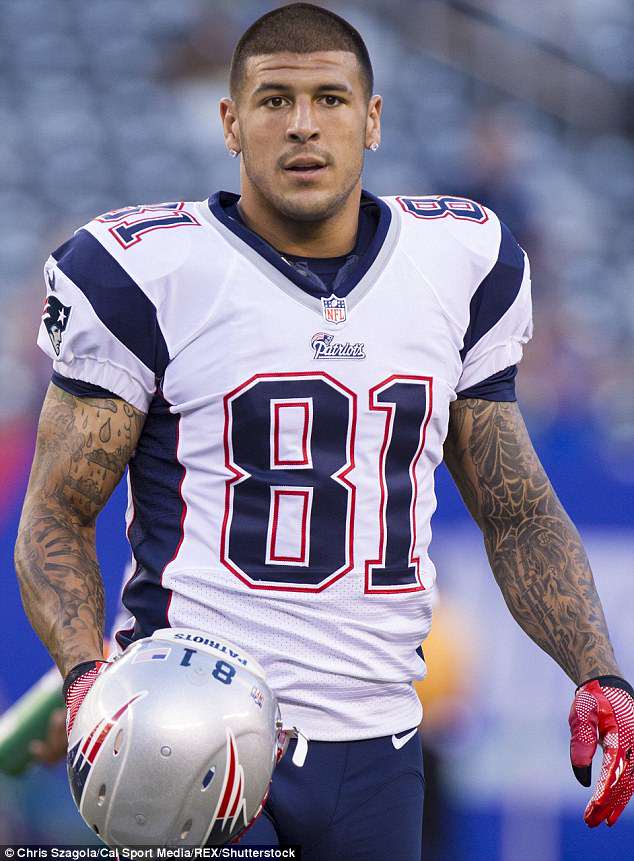 Former Patriot tight end Aaron Hernandez was found hanged by his own bed sheets in prison and died on April 19, 2017

Investigators said he shipped the three guns including a FEG 7.62×39 Hungarian rifle, to Aaron Hernandez in the spring of 2013.

The weapons had been stashed inside a beat-up Toyota Camry that was found in the football player’s garage in North Attleboro, Massachusetts.

He pleaded guilty to weapons charges and a sentencing memo stated that he was blinded by the football player’s fame and was ‘grateful to be noticed [by him], and had no way of anticipating the terrible events which would follow’.

Oscar Hernandez was never called to testify against Aaron Hernandez during the footballer player’s trial.

But his lawyer told the judge in his case that his client was beaten by fellow inmates at the Wyatt Detention Center ‘after having been incorrectly listed as a government witness’.

Following the attack, Oscar Hernandez spent some time in solitary confinement at the Rhode Island jail.

He was sentenced to two years in prison and three years of supervised release and is currently is on federal probation from that case, according to the sheriff’s report

Authorities say the couple approached Snapper’s restaurant when Hernandez pointed a shotgun out the passenger window and began firing shots.

Hernandez’s accuser told deputies that he returned fire, then ran to a friend’s house, where he called 911.