Anastacio Eugenio Lopez-Fabian, 24, was deported to Guatemala twice but was arrested in February in Oregon for raping a girl under the age of 14

A man who was deported twice to Guatemala has been charged with the rape of a girl younger than 14 in Oregon.

Anastacio Eugenio Lopez-Fabian, 24, was arrested by Seaside police in Oregon in February after investigators found he had sex with the underage girl multiple times.

He has been charged with rape as well as assault and harassment.

He posted bail and was released but was later detained again on March 7 after police learned of his illegal status in the US and that he had been deported twice before.

He is currently held at a detention center in Tacoma, Washington.

Lopez-Fabian was deported to Guatemala twice, in 2013 and 2014, according to Immigration and Customs Enforcement (ICE) spokeswoman Carissa Cutrell.

Alarm was raised last week when the victim’s mother reported her as a runaway to police last week.

She said the girl left the house and did not want to go to school after attending a party the night before, according to the Daily Astorian.

Police found her at Lopez-Fabian’s home.

The crime was discovered when police interviewed her.

On Monday ICE released a statement to KATU News revealing Lopez-Fabian is an illegal immigrant in the US. 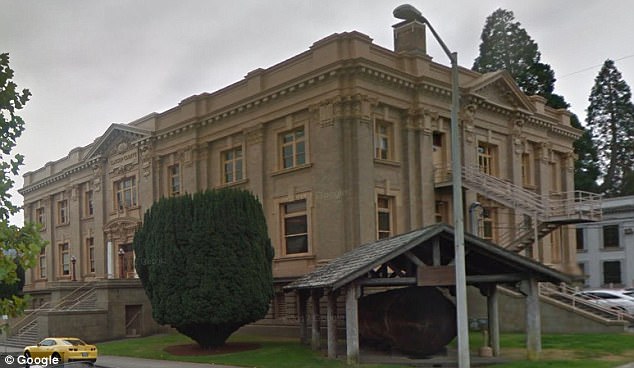 ‘Anastacio Eugenio Lopez-Fabian is a citizen of Guatemala illegally in the U.S. ICE deportation officers removed him to his home country on two prior occasions, once in April 2013 and another time in January 2014,’ the statement said.

‘On Feb. 16, 2018, Lopez-Fabian was arrested for felony rape, among other charges…Hours after his release, ICE deportation officers received information from federal databases about his prior immigration history and his most recent arrest,’ it continued.

‘From there, they conducted an online review of jail and court records and determined that Lopez-Fabian did not have lawful status in the country, and subsequently, targeted him for immigration enforcement,’ it said.

He was then arrested for his immigration violations.

He is scheduled to appear before Clatsop County court next month for the rape charges.

Clatsop County has been criticized by ICE for not detaining undocumented immigrants.

Sheriff Tom Bergin said ‘He posted bail, so there’s not much we can do unless ICE notifies us, which it didn’t’ on the matter.

Clatsop County District Attorney Josh Marquis said to ICE he wants to take Lopez-Fabian to court due to the severity of his offenses against the young girl, according to KATU News.