A man has survived allegedly being robbed, bashed and shot in a 24-hour saga on the Gold Coast after the luxury car he hired to impress his girlfriend was allegedly stolen by violent thieves.

Theo Penemenos, 27, hired a black 2020 Mercedes Benz S450L, worth an estimated $285,000, before it was allegedly stolen at gunpoint at Budds Beach, Surfer’s Paradise on Thursday.

Police allege Mr Penemenos and his girlfriend went to visit a friend when they were attacked by two men, one with a Glock handgun and the other with a ‘pirate knife’.

He was forced to catch an Uber back to his home in Brisbane.

The following day Mr Penemenos was allegedly lured to a high-rise unit at Lawson Street, Southport to negotiate buying back the Merc after receiving an anonymous phone call, the Courier Mail reported.

Brisbane man Theo Penemenos, 27, hired a black 2020 Mercedes Benz S450L, worth an estimated $285,000, before it was allegedly stolen at gunpoint at Surfer’s Paradise 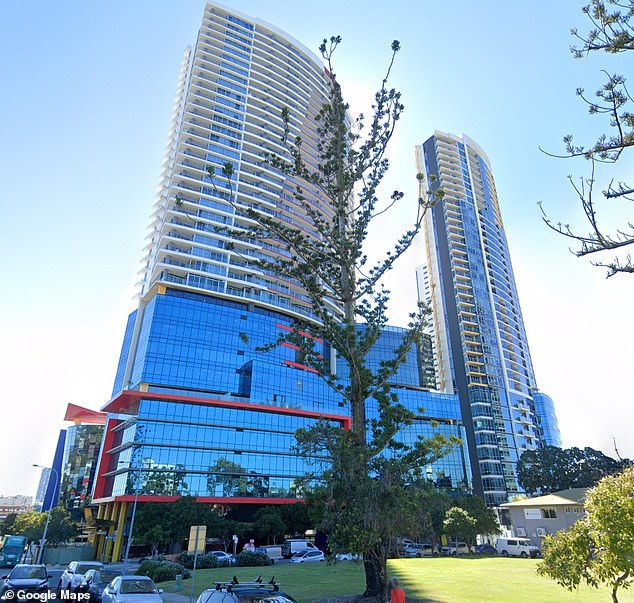 The following day Mr Penemenos, 27, was allegedly lured by an anonymous phone call high-rise unit at Lawson Street, Southport to negotiate buying back – when he was allegedly violently attacked

According to court documents, Mr Penemenos was sent $4,000 by his parents to pay for it and had handed over $2,000 when he was allegedly attacked by three men inside the Lawson Street apartment.

It is alleged he was hit in the head and shot with a sawn-off shotgun on the upper right thigh through a pillow placed against his leg.

‘It will be alleged that around midday today, two other men – one of whom was known to the 27-year-old – lured him to a high-rise unit on Lawson Street to negotiate payment for the return of the vehicle,’ a Queensland police statement read.

‘An altercation allegedly took place inside the unit resulting in the 27-year-old sustaining a gunshot wound to his upper right leg.

‘Three men, and a woman associated with the offenders, then rode the elevator to ground floor where the 27-year-old fled on foot and the three others allegedly fled in the stolen Mercedes,’ court documents read.

The three alleged attackers then fled the unit, before the wounded Mr Penemenos managed to get in the lift and stagger into a ground floor shop.

He rushed into a grocery store at 12.30pm, where proprietors called the police. 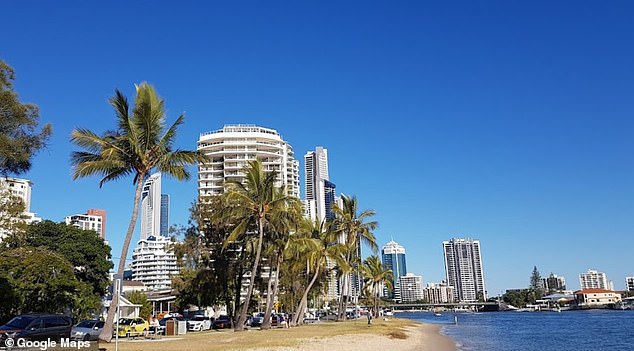 The man was transported to the Gold Coast University Hospital with a bullet wound to his leg and facial injuries and remains in a stable condition.

It is understood the three men left the scene in the allegedly stolen Merc – only to be tracked down by Queensland police two hours later.

Police charged Joel Hindson, 25, Leum Kostopolous and Bronson Samuel Godfrey, both 29, with several offences including ‘deprivation of liberty, committing acts intending to maim, robbery with violence, extortion and unlawful use of a motor vehicle’.

Hindson was also charged with possession of ice and GHB.

They were all remanded in custody after appearing at Southport Magistrates Court. 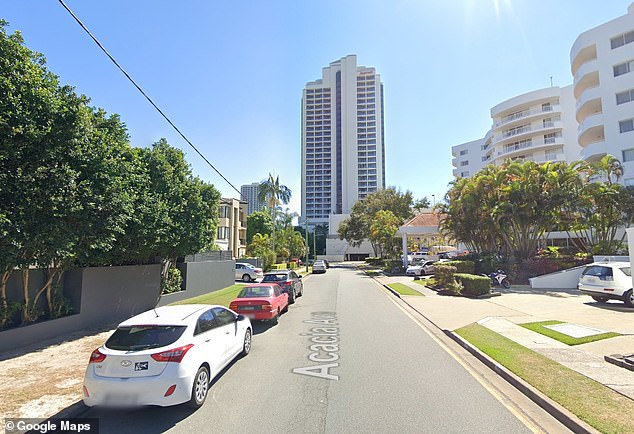 Kostopoulos appears again November 19 while Hindson and Godfrey return to court on December 9.

Two women, 26 and 32, who were apprehended by police with two of the alleged attackers also face drug and motor vehicle charges.

They were granted bail to appear again on November 25.