A man with a knife has gone on a rampage through central Sydney, reportedly stabbing multiple people.

Police were called to King and Clarence Streets in the CBD, near Wynyard Station at  about 2pm on Tuesday.

A man wearing a grey hoodie covered in blood wielding a large knife could be seen yelling in the street as hundreds of people fled for their lives.

Footage shows the attacker being pinned to the ground by hero bystanders carrying milk crates.

The man was reportedly captured by onlookers to held him to the ground with a milk crate.

Police were called to King and Clarence Streets in the CBD, near Wynyard Station at about 2pm on Tuesday

Another witness shared on Twitter they saw a man stabbing people near where he was having lunch.

‘So insane! A random dude just started stabbing people in the city right outside where we were having lunch.

‘I saw people running so I ran towards him with a few other guys. He ran all the way back to near my work where a lot of others had cornered him for the police.’

Onlookers filmed a man being dragged away from police about half an hour after the incident began to unfold.

A NSW Police spokesman told 7news a man was taken into custody on Clarence Street, near Wynyard Station, about 2pm.

She said it was too early to determine whether there were any injuries. 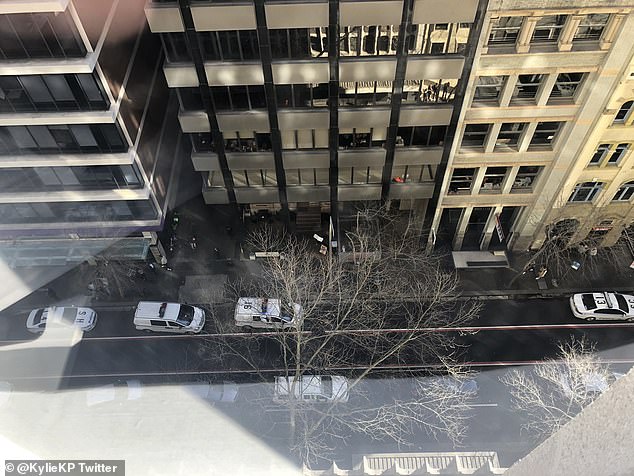