A man with ‘Body Integrity Identity Disorder’ has revealed the way he purposely destroyed his own foot so it could be amputated to alleviate his life-long struggle with the psychological disorder.

A man calling himself ‘John’ told OK Whatever that he had suffered from Body Integrity Identity Disorder, or BIID, since he was four or five years old, finally ‘curing’ himself of it in his mid-20s after having half his leg amputated.

BIID is said to be a rare condition in which the afflicted have a schism between the mental image they have of their bodies and their actual forms, leaving them with an intense desire to amputate healthy limbs, among performing other disfiguring or debilitating actions.

A man called ‘John,’ who had ‘Body Integrity Identity Disorder,’ revealed he used a large rock to crush his left foot beyond repair, requiring it to be surgically amputated (file image)

As doctors do not perform voluntary amputations for ethical reasons, many people with BIID are said to have to live with the sentiment that they have a body part that doesn’t feel like it belongs where it is.

John originally shared his story in a since-deleted reddit post, stating that in the early 2000s — when he was in his 20s — he decided to injure himself so badly that a surgical amputation would be necessary.

He wrote that he took himself to a wooded area that was near a hospital and smashed the biggest rock he could carry against his left food until it was mangled enough that he wouldn’t be able to walk on it ever again.

At the hospital, he wrote, doctors said that his lower left leg required amputation because it could not be repaired. The limb was removed below the knee the next day.

John wrote that the amputation cured him of his BIID and that the about 20 year hatred he felt for the leg and the constant desire he had to remove it finally disappeared. 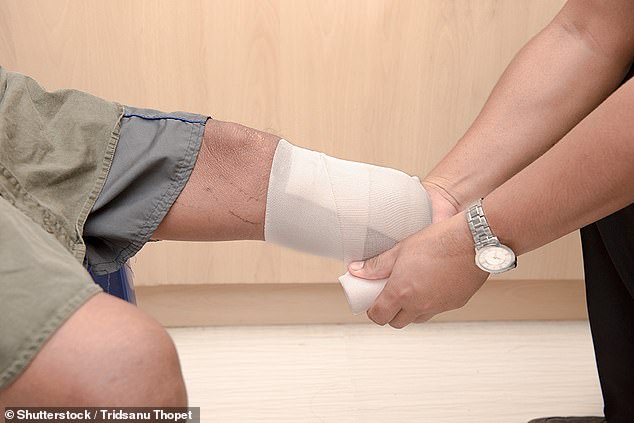 ‘Seeing my stump for the first time was as happy as I’ve ever been. So I can’t really say I have BIID anymore,’ John wrote in an email to OK Whatever.

He told the website that the incident occurred 13 years ago and that he hadn’t revealed the truth about what he did or why to anybody he knows.

‘My wife, along with everyone else I know, believes the story that I was trying to rock climb and part of the cliff broke off and crushed my foot,’ John wrote while requesting ‘total anonymity.’

John wrote that he likes ‘being the one-legged guy’ and that doing things like jogging, hiking and driving a car are ‘more fun than when I had two legs.’

He said that he had always been ‘envious’ of amputees and ‘felt like I should have been’ one his whole life.

Now, he’s ‘very proud’ of his amputee status, wears shorts and sandals to show off his prosthetic leg and foot, and enjoys ‘the uncomfortable stares from other people.’

The flip side of the flattering attention, however, is the number of people messaging him on social media, asking him for help in their own quest to become an amputee, which he refuses.

‘I get messages like, “I want to be an amputee like you. Please help me cut off my legs.” My reply is, “I’m not a doctor so I have no idea how to do that. And I can’t offer any advice beyond telling you what I did,”‘ he told the website.

OK Whatever reported that John sent them a series of photos of him amputated leg and, a few days later, deactivated the email address he was using and then deleted his reddit username and deleted his original post describing what he’d done to himself.

A BIID researcher suggested that it’s possible John had second thoughts about all that he’d revealed due to medico-legal issues.

Prof. Peter Bruggel, head of neuropsychology at the University Hospital in Zürich, told the website that John could be in legal and financial trouble — from an insurance standpoint — if it was discovered that he had intentionally injured his foot so that it would be amputated.

Bruggel also said that John might’ve been worried about his friends and family finding out the truth behind his missing limb.

‘The whole thing is similar to cheating on a partner. Who wants to freely talk about affairs?’ Brugger told OK Whatever.