Their airfield team had been working hard through the night to try to keep the runways clear as heavy snow fell.

But one worker at Manchester Airport was clearly intent on having at least a bit of fun, as she was seen rolling a snowball with her feet next to a Ryanair plane.

However, the airport did not see the funny side – saying it will ‘look into this isolated incident with the relevant organisations to ensure appropriate action is taken’.

The moment was caught on camera by a passenger in the terminal yesterday, who tweeted: ‘Everyone is working really hard to clear the runway. Except this person.’

The Twitter user, called ‘Chloe’, also posted that the worker was ‘just having a bit of fun, as am I’, adding: ‘This is just a funny observation – nothing meant by it!’

Flights were delayed and cancelled yesterday as heavy snow fell over the Greater Manchester area, which also resulted in more than 210 schools being closed.

An airport spokesman told MailOnline today: ‘Snow conditions caused a temporary closure of our runways yesterday and hundreds of colleagues from Manchester Airport and our partner organisations worked in difficult conditions to minimise disruption for our customers.

‘We expect all our partners to have the same focus on delivering a safe and secure operation, especially in challenging circumstances, and will look into this isolated incident with the relevant organisations to ensure appropriate action is taken.’

One of its runways was reopened by 10.30am yesterday, but customers were still advised to check the status of their flight with the airline. 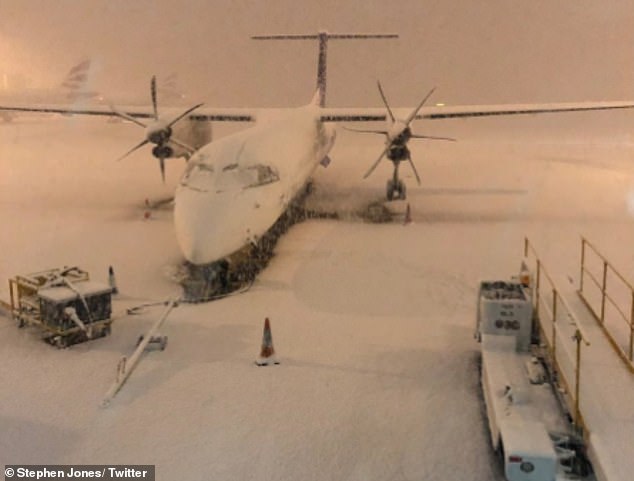 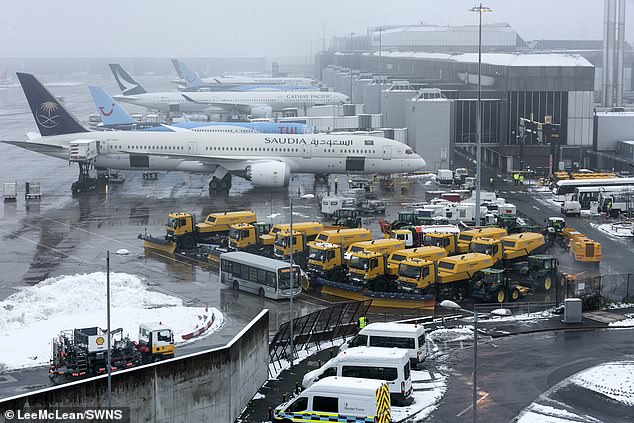 The airport said yesterday: ‘Our airfield team has been working through the night to keep the runways clear, which resulted in the day’s operations starting as planned.

‘However, as conditions worsened significantly (yesterday) morning, we took the decision to temporarily close our runways.’

Officials worked to ‘mitigate the challenging conditions and hope to minimise further impacts’. The airport has been contacted for comment about the video.

The freezing temperatures have led to weather warnings being issued by the Met Office across the country for snow, ice and fog today and into tomorrow.