Just three paramedics were allowed inside the Manchester Arena in the immediate aftermath of last year’s bombing.

As dozens lay dying and grievously injured, scores of ambulances were held back for at least an hour as rules prevented paramedics from entering a potentially dangerous scene.

One woman who resorted to using the strap of her handbag as a tourniquet to prevent herself bleeding to death was still lying there two hours later.

Merchandise tables were used as makeshift stretchers, while T-shirts meant as souvenirs were torn up for bandages.

An official report, published today, is expected to level strong criticism at the emergency services’ response, as survivors demand changes to the way they deal with future atrocities.

As many as 40 victims were too injured to move from the devastated foyer in the moments after suicide bomber Salman Abedi blew himself up at the end of an Ariana Grande concert on May 22 last year.

A total of 22 people were killed and more than 500 injured in the atrocity.

But despite 56 ambulances being scrambled to the scene, fears of further attacks meant just three paramedics were allowed inside for an hour after the bomb went off at 10.33pm.

One survivor called for more ambulance crews to be trained to enter hazardous environments.

Robby Potter, 48, who almost died when shrapnel became embedded in his heart, said: ‘It must have been half an hour after the bomb, at least, before I was put in the ambulance. 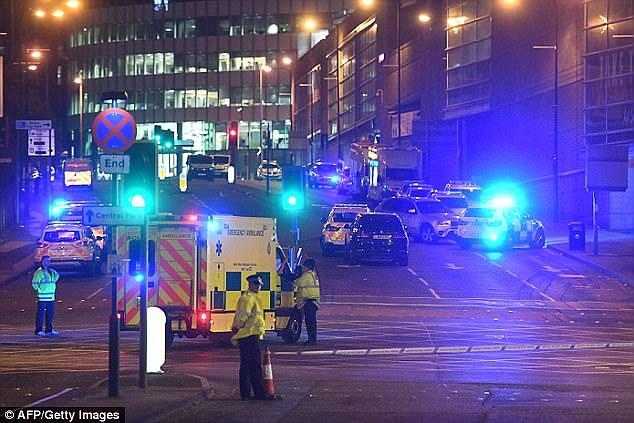 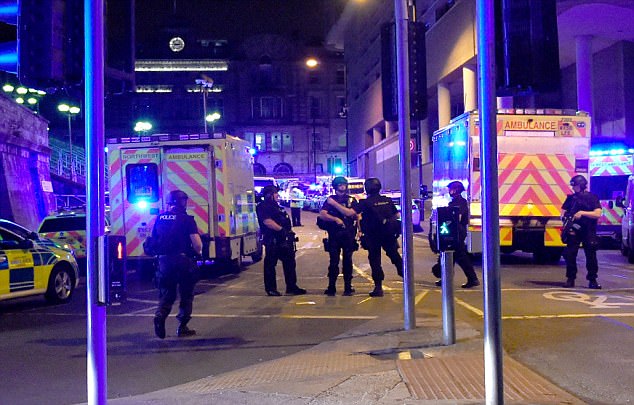 An official report, published today, is expected to level strong criticism at the emergency services’ response, as survivors demand changes to the way they deal with future atrocities

‘I don’t want to blame the emergency services who were present on the day but procedures need to be put in place so they can do their jobs and save lives.’

An ambulance source said: ‘We’re bracing ourselves for criticism in the report, but we have processes to follow in any major incident and everyone did their best.’

Lord Kerslake’s report – commissioned by Greater Manchester mayor Andy Burnham – is also expected to highlight a series of failings by the fire service.

In what has been described by insiders as a ‘shambolic’ breakdown in communication, Greater Manchester Fire Service were not officially informed by police that the attack was no longer considered to be an ongoing terrorist threat until after midnight.

As a result, even anti-terror crews carrying specialist equipment were held back, with the first fire officers not arriving until 12.20am – nearly two hours after the blast.

It later emerged that the county fire officer was not told a bomb had gone off for 35 minutes.

Terror of injured who lay for hours waiting for help 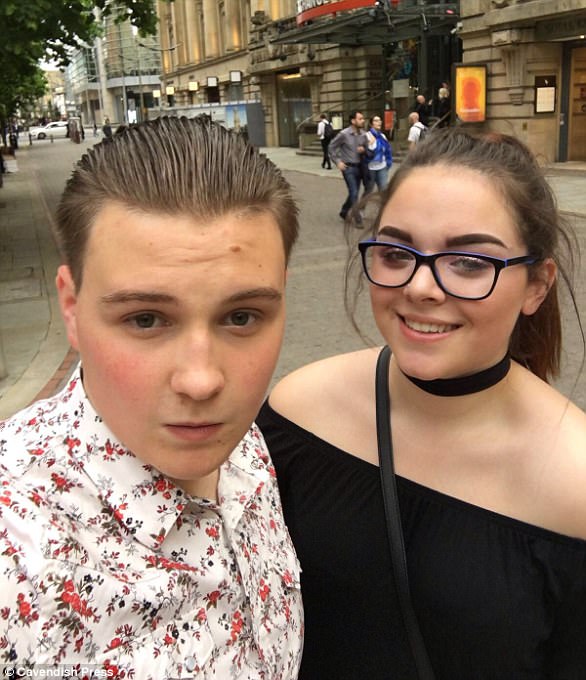 Badly-hurt survivors have told of their terror and confusion as they waited in the bombed-out Manchester Arena.

He spent a week in intensive care and had five operations to remove more than 20 pieces of shrapnel in his body, one of which left him blind in his right eye.

But despite the severity of his condition, he was left on the floor for as long as two hours before being taken to hospital.

Recalling the traumatic moments after the blast, Adam, from Bury, Lancashire, said: ‘All I remember is a white light and very severe ringing in my ears. It felt like I was dreaming, in a very bad nightmare. It was surreal.’ Victims Josie Howarth, 62, and Janet Senior were forced to improvise with a handbag strap as they waited for help.

Speaking last year, Miss Howarth said: ‘I took my handbag strap off and said to Janet, “Can you help me tie a tourniquet on this leg?”’ And that’s when I realised she was injured [too].’

As they waited, Mrs Senior, 60, from Knottingly, West Yorkshire, told her sister to hold her hand ‘because I thought our time had come’.

They were overcome with emotion after recalling that they had to wait two hours for help – with paramedics later telling them the tourniquet had prevented Miss Howarth from bleeding to death.

The first paramedic to enter the bombed arena was father-of-three Paddy Ennis, 38, who was waved through by police officers and confronted with a horrific scene.

Speaking days after the attack, he described having to ignore screaming survivors as those who were able to make a noise were not the most seriously injured.

He assumed colleagues would soon join him, but instead only two more paramedics – members of two specially-trained hazardous area response teams which were scrambled – were allowed in.

Only helped by stunned members of the public and trained first responders on duty, they were overwhelmed by the number of casualties desperately needing help.

‘In any other situation there would be a massive ambulance response for each individual person,’ Mr Ennis said.

Phil Dick and his wife Kim were waiting for their daughter Tamla, 17, and granddaughter Sasha, 15, who both survived. The couple, from Bradford, spent over an hour doing what they could to save wounded concert-goers using improvised bandages.

They fear that some may have died while they were waiting for paramedics to see them.

Mr Dick, 55, said: ‘It was down to people like us to help the wounded. Event security staff were running round throwing people green plastic first aid kits but it wasn’t really sufficient.’

Mr Dick said he repeatedly shouted, ‘We need paramedics now!’ to which police officers replied: ‘We’re just making sure there are no more bombs.’

‘There was just too much for just three paramedics to deal with,’ he added. ‘The longer it went on the more silent it became.’

North West Ambulance Service said all ‘critical’ patients had been moved and were being treated within an hour of the blast, but it took four hours for all those needing treatment to be transferred to hospital.

It will give its response to the report tomorrow, but has previously said that while it ‘welcomes’ any recommendations it is ‘confident in our response which followed implementation of our major incident plan, training and experience that we have in place for this type of situation’.