A bungling bank robber was caught after he wrote down his list of demands on a till receipt for vitamin tablets he had been given at a Holland and Barrett 100 yards away.

Daniel Healey, 42, passed Santander staff in Manchester a note saying: ‘Don’t Panic!! Put all bank notes in the bag! I promise if you do as I say no one will get hurt. Don’t be a hero – I’m sorry to do this.’

The robber fled when the cashiers triggered the alarms but left behind the incriminating note which showed he had been at the neighbouring health food shop.

Daniel Healey, 42, handed staff at a Santander in Manchester a threatening note demanding they hand over bank notes to him but quickly fled as alarms were triggered

Staff at the Holland and Barrett in the city centre agreed to play back the CCTV for police which showed Healey being given the till receipt as he paid for his health supplements before carrying out the raid last March.

His fingerprints were also found on a Tesco bag he had asked cashiers to fill with money.

Inquiries revealed Healey had robbed a Coral book maker of £285 two days earlier when he pretended to have a weapon in his pocket.

He claimed to have fallen foul of loan sharks before launching the crime spree in north Manchester.

Prosecutor Miss Andrea Lock said the first incident on March 9 last year took place at Coral Bookmakers in Harpurhey, Manchester when the staff were getting ready to close the shop just before 10 pm closing time.

Healey was said to have loitered before claiming a winning ticket and leaving the shop. He then returned and queried the denomination of notes he had been given.

‘He walked away from the counter but then approached and took a white plastic bag out of his pocket saying ‘fill the bag up and put the money in the bag I’m not messing.’

‘One staff member told him they had no money but he replied ‘don’t talk daft’.

‘She continued to tell the defendant there was no money. He then said ‘don’t make me do this, I’m giving you to the count of three’ and made as though to reach for a weapon in his pockets. She then tipped the cash from the till into the plastic bag. 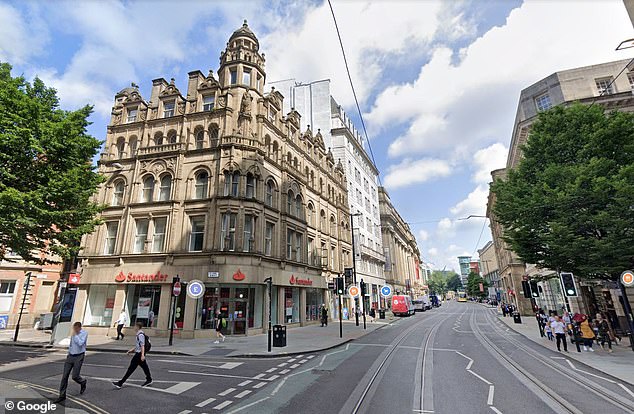 ‘The defendant apologised and walked out of the shop with £285.19 leaving both staff very shaken.’

Two days later Healey then visited the Santander bank on Cross street in Manchester at around 2pm where again he was said to be loitering.

One member of staff had already spoken to him after he approached a customer and soon after he put a note through the counter and a white Tesco bag on the counter top.

Ms Lock said staff member Janice Rodgers only saw the word ‘panic’ and that the defendant took out a spray which she described as being akin to ‘something you would use to clean your bathroom with’.

He did nothing threatening with the spray but passed her the Tesco bag and said calmly ‘it’s not a joke’.

‘Miss Rodgers pulled the emergency card out of her till which caused the screens to go up and set off the emergency alarm. Police and security were alerted,’ Ms Lock added.

‘The defendant left the bank carrying the bottle but left the note and the Tesco bag behind. 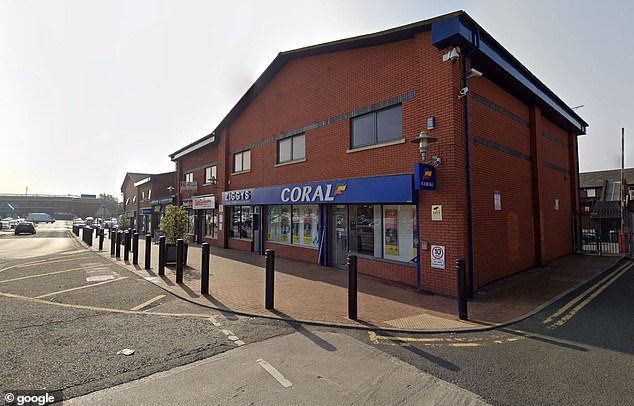 Investigations also discovered Healey had robbed a Coral book maker, in the Harpurhey of Manchester, of £285 two days earlier when he pretended to have a weapon in his pocket

‘The full note read: ‘Don’t Panic!! Put all bank notes in the bag! I promise if you do as I say no one will get hurt. Don’t be a hero- I’m sorry to do this.’

‘It was written on the back of a Holland & Barrett till receipt. Inquires at the nearby store revealed the defendant on CCTV shopping there at the time the purchase on the receipt was made.

‘His fingerprint was located on the Tesco bag. He made ‘no comment’ replies when interviewed by police in August.’

In mitigation his lawyer Mark Friend said: ‘This offending followed the breakdown of a relationship.

‘He began gambling while he was working hard with a good income and employment prospects.

‘It is perhaps not surprising that the first offence took place at a bookmakers as he had turned to loan sharks to pay off his gambling debts.

‘The defendant recognised they are not people to whom you can say no and he came to behave in this way following threatening phone calls from them.

‘The defendant has no previous convictions for similar offences and pleaded guilty. I urge the court to deal with this case with an element of mercy and to see the light at the end of the tunnel in this defendant’s life.’

But sentencing Judge Alan Conrad QC said: ‘You are someone who is not without intelligence or ability but over a few days more than a year ago you tried to rob commercial premises which is something you have never done before.

‘Your incompetence when you turned to such crime was clear because the evidence you left behind was overwhelming. This was not a successful robbery.

‘Using threats in order to steal is always serious and places victims in fear. It sometimes affects people’s ability to go back to their jobs in the same way.

‘In mitigation there is your background, the fact I do believe you are sorry for what you did and your early guilty pleas.’