This being the group stage it was only strike one for Manchester City. It was, however, a sobering reminder of what life will one day be like when the Catalan circus has left town – and a heartening vision of the future for their rivals, too.

No Pep, no pep, it would seem. With their coach banned for this match, they looked bereft for significant spells, missing their energy, missing their intensity. Mikel Arteta did his best to fill the space in the technical area but how could he? We’ve seen that Amazon documentary now. We know what a show-stopping act he is following.

Lyon did not dominate the game for this win, but nor were they unworthy winners. Indeed, before City pulled one back after 67 minutes, Lyon had been denied a third by Ederson’s fingertips and a post. Had that gone in, one imagines the Etihad would quickly have looked even emptier than it did just before kick-off. 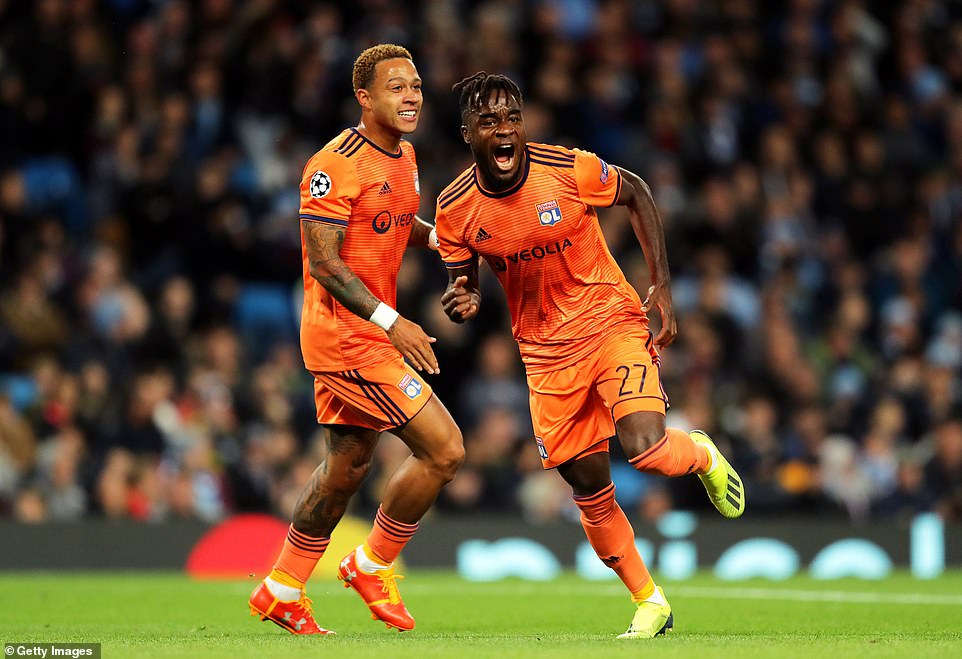 The 21-year-old sprints off to celebrate his opener at the Etihad stadium, as Memphis Depay joins his team-mate 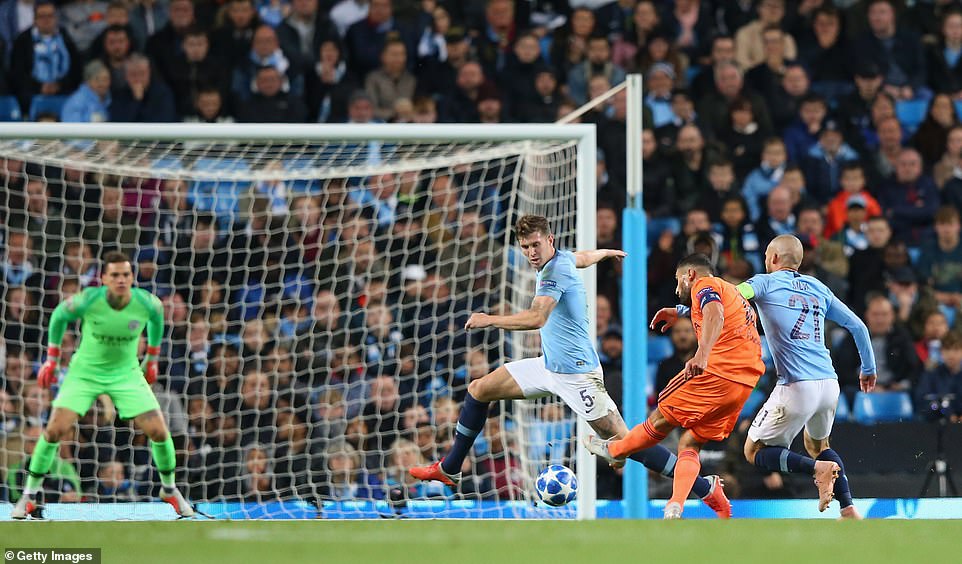 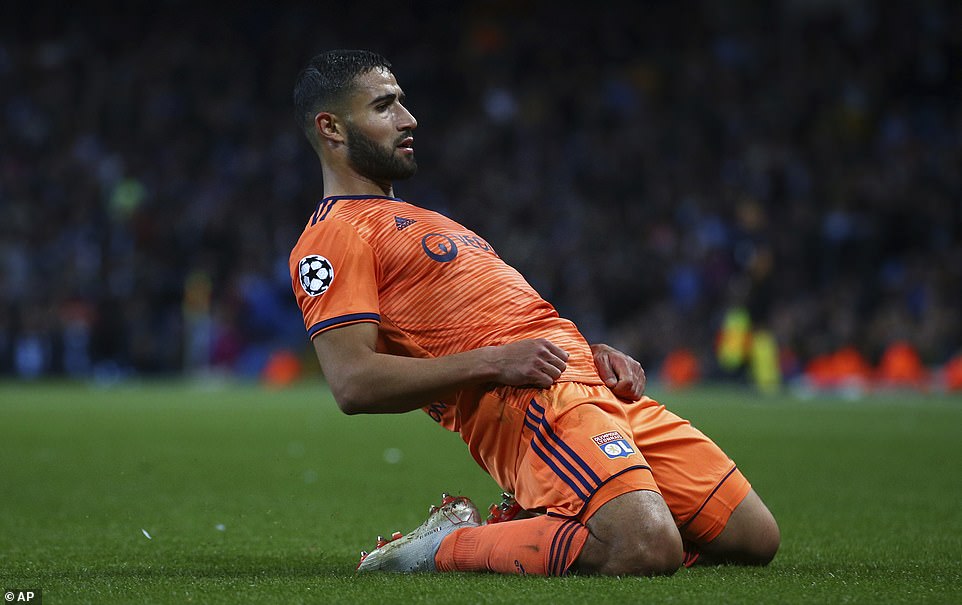 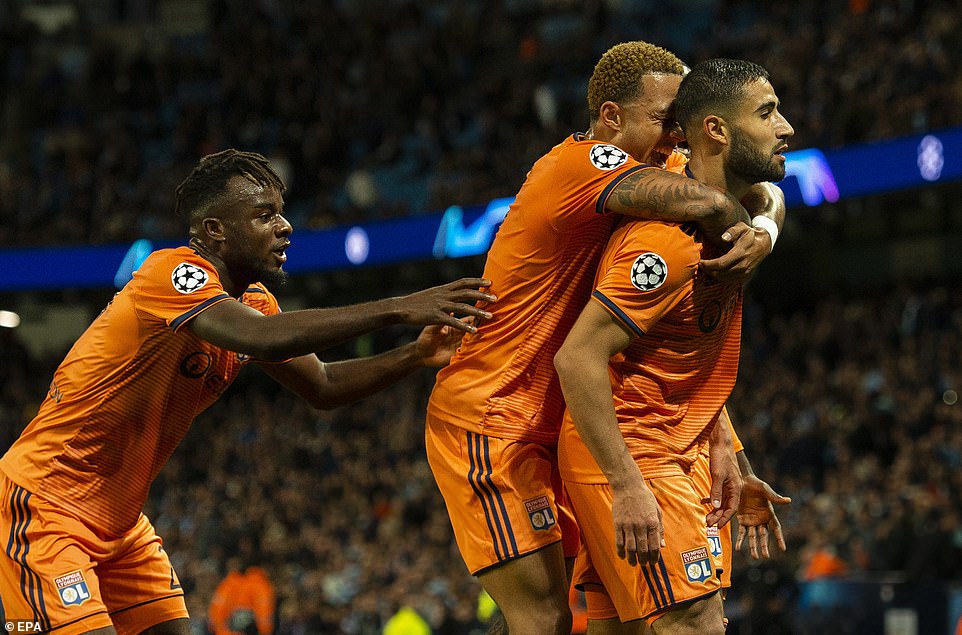 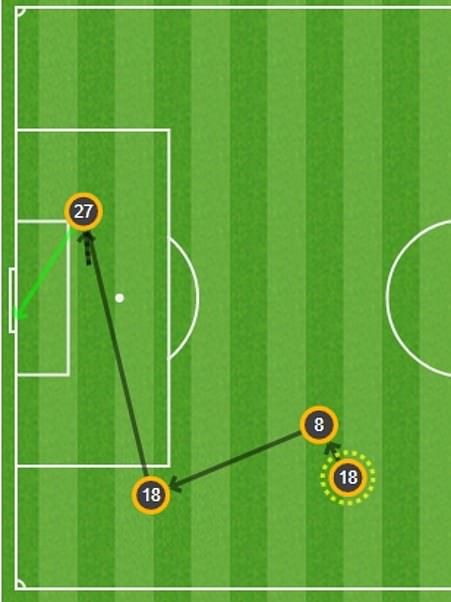 Maxwel Cornet capitalised on a mistkae by Fabian Delph to give Lyon the lead in the first half. Click HERE for more from our Match Zone.

As it was, substitute Leroy Sane helped get City back into the game and create some late drama. Brought on for Ilkay Gundogan a mere five minutes after half-time, it was his pace that undid Lyon, tearing down the left flank past two men – the lightning quick Rafael the second – before cutting the ball back for Bernardo Silva to finish.

Yet even after that fillip, City were strangely disappointing, unable to aim a very British kitchen sink at Lyon in a way Liverpool might.

Indeed, it was the performance of Jurgen Klopp’s men against Paris St Germain on Tuesday night that made this display so hard to accept. City were not just beaten by Lyon, but by the memory of Liverpool, too, and the furious way they went about their business.

Maybe Liverpool would look lost without Klopp, too – but this was a sobering experience for the blue side of Manchester. When Kyle Walker took free-kick responsibilities with seven minutes to go and curled a shot tamely over the bar, Riyad Mahrez his decoy, it seemed to encapsulate the aimlessness. 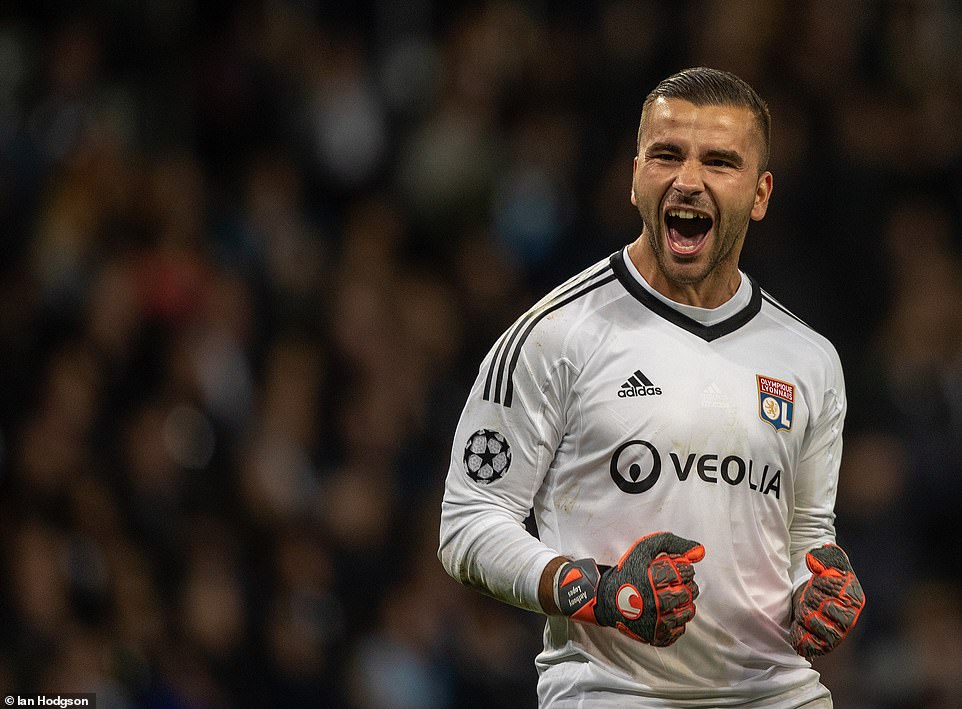 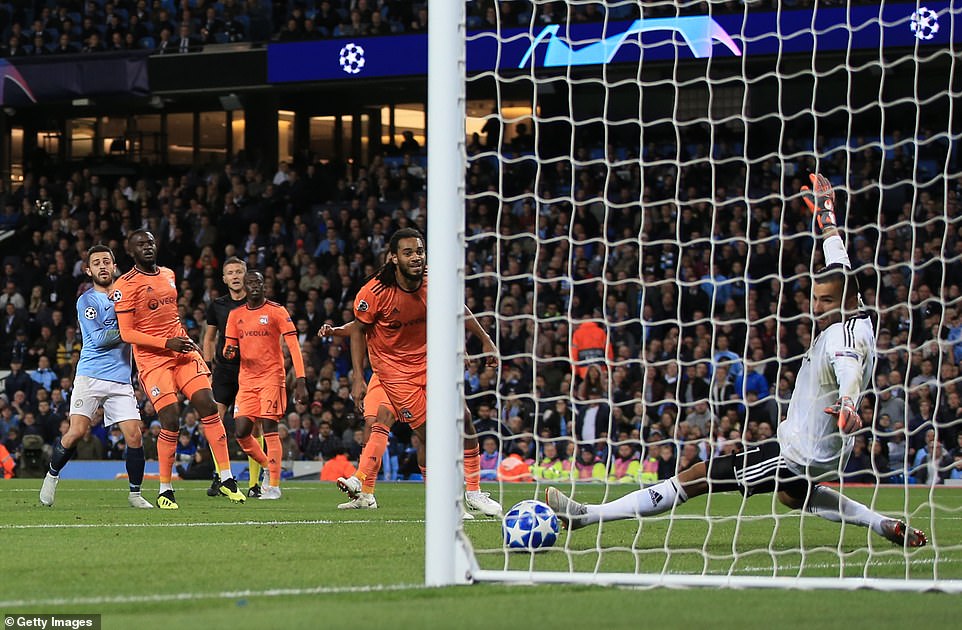 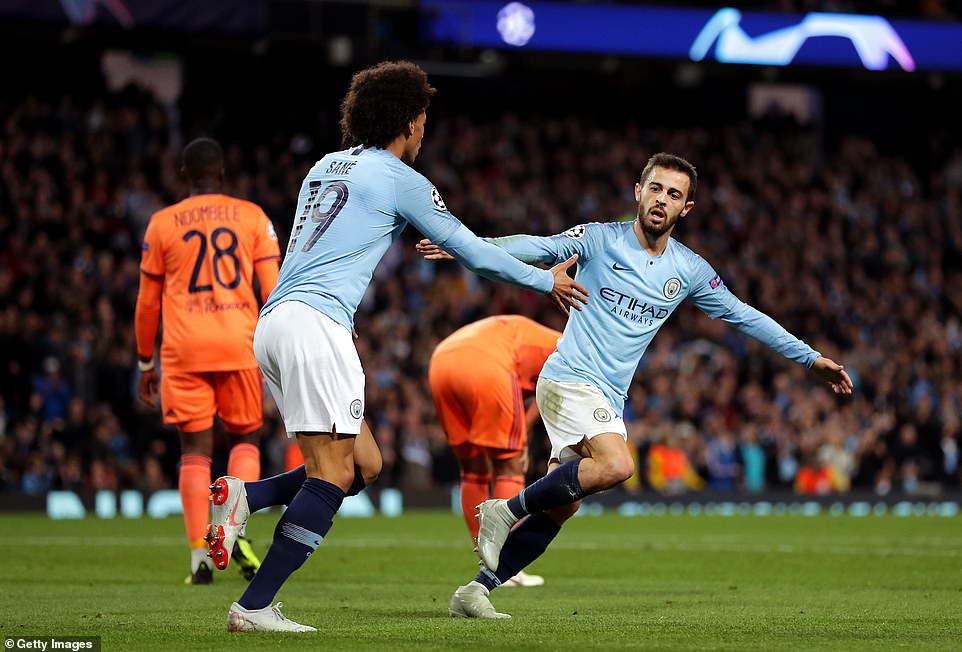 It was obvious the talismanic figure Manchester City were missing. Not captain Vincent Kompany, the prolific Sergio Aguero, or record signing Riyad Mahrez on the bench – although any of that three could have made a difference in a deeply unsatisfactory, borderline disastrous, first-half.

No, the man they needed was imprisoned in the stand. Pep Guardiola, banned from the touchline for his sending off against Liverpool last season, his absence a hole in the fabric of his club. Whatever might be said of Mikel Arteta as Guardiola’s shadow, his right-hand man or possible successor, the first-half drift was proof, if any were needed, of the influence of the modern super-coaches.

The same Manchester City players that appeared unstoppable under Guardiola’s intense gaze were suddenly sloppy, even slow. City’s build up was ponderous, their use of the ball careless. Kyle Walker at one time passed directly to an orange shirt, almost unthinking.

For Lyon’s opening goal, City were shockingly slack from the heart of midfield, to their reaction to danger, to their defence of goal. Perched in the middle tier, Guardiola had been sitting with his feet up, but not in the confident way a man might rest his shoes on a polished desk in a corner office. 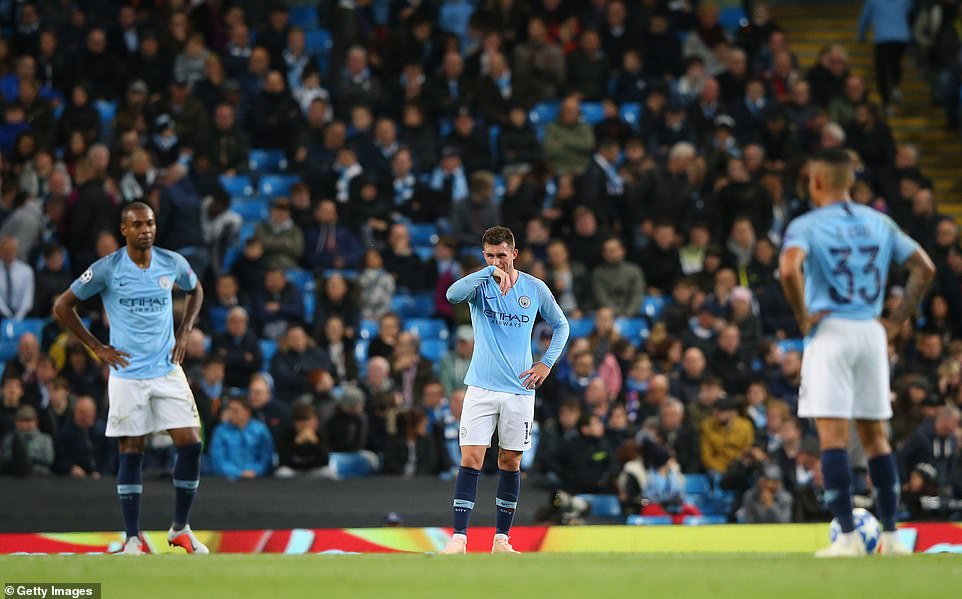 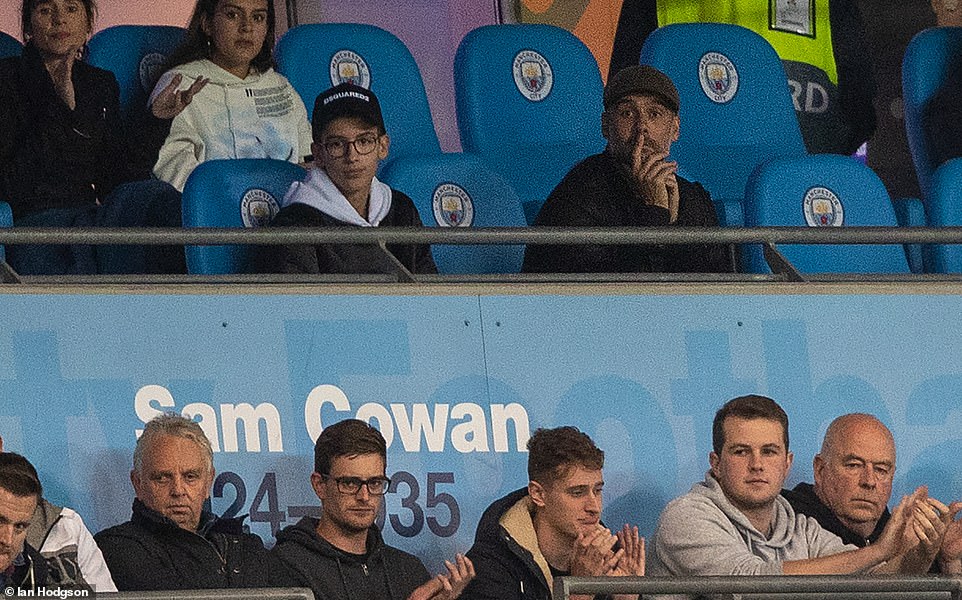 Pep Guardiola cuts a sullen figure as he watches on from the stands at the Etihad, due to his European touchline ban 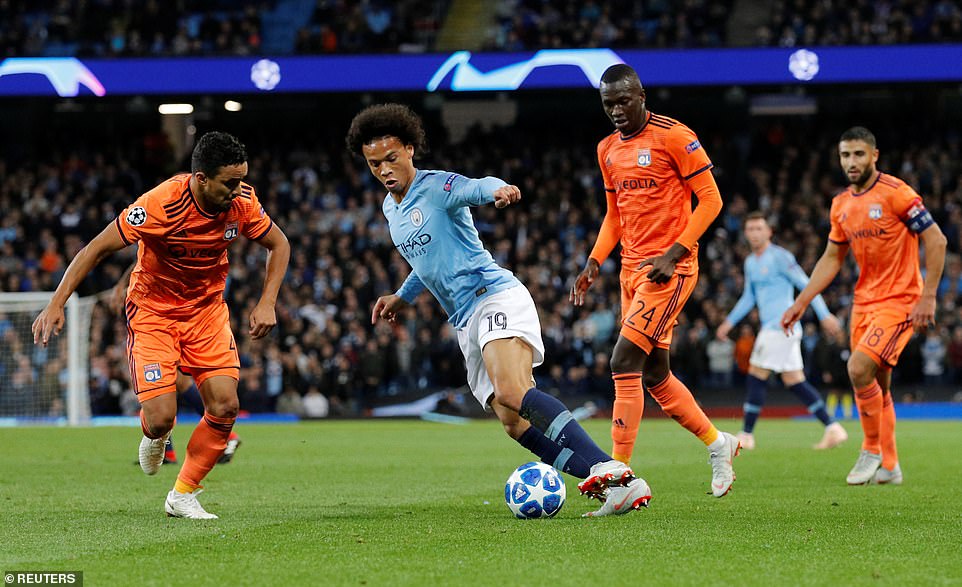 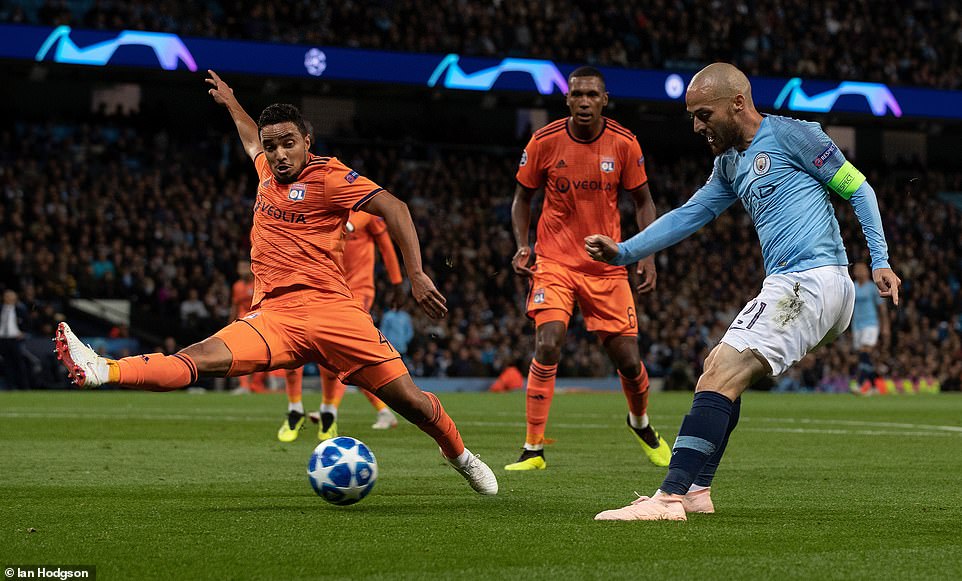 David Silva, wearing the captain’s armband, attempts to fire in a low cross, while Rafael tries his best to stop the ball

He looked hunched, he looked tense. He could see things he did not like, things that were wring with his team, unfamiliar attitudes, unfamiliar errors. He must have wanted to go at them, as he would from his technical area, or in the dressing-room given the 15 half-time minutes to do his stuff. Instead, here he was; amid the prawn sandwiches and the fine diners. City have the swanky Tunnel Club. Guardiola was in a hole.

The mood around the place did not help. It is not the fault of an empty seat that Fabien Delph misses his kick at a vital moment, yet when one recalls the atmosphere at Anfield last night and the way Liverpool swept Paris St Germain aside, one cannot help but compare it unfavourably with City’s own European experience.

Booing the Champions League anthem is not the issue – more should do it – but it does begin the thought process that this is not a competition that the club takes to its heart. Then there are the empty seats. A significant number, all around, suggesting either complacency – ‘we’ll go later on, when it matters’ – or apathy, ‘it’s only Lyon, who cares’. So while Anfield’s sound and fury inspired an almighty level of intensity against PSG, Manchester City played like their ground looked: underwhelming, slightly absent.

They did a few little dances around Lyon’s goalmouth area but not with the energy Liverpool displayed, and they surrendered meekly to Lyon’s counter attacks and were two goals behind before half-time. 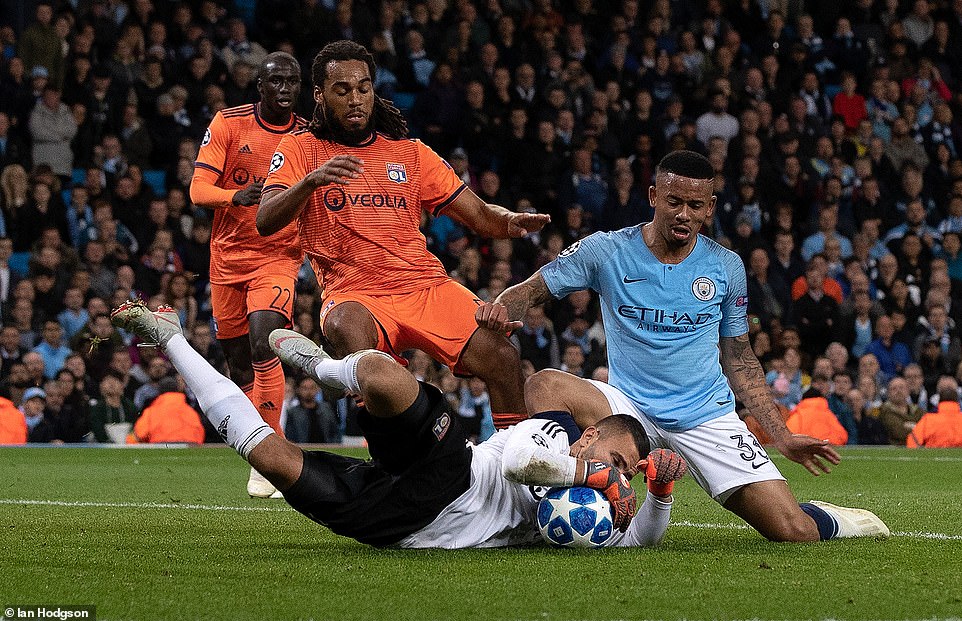 Gabriel Jesus attempts to get on the end of a low cross from the flank, but he is beaten to the ball by the goalkeeper Lopes

The first goal came after 26 minutes, the result of an exchange of passes in midfield that tried to be crisp but ended up haphazard – like hearing a complicated piano piece played badly. Eventually, Lyon seized the ball and the initiative, Nabil Fekir speeding down the left flank no doubt in the way that attracted the attention of Liverpool, before that moved soured in the summer.

Walker was lacked alertness to this development, allowing Fekir to get in a fine cross, although one that should have been cleared by Delph at the far post. Again, out of character, he lost concentration and failed to make a significant connection with the ball. It fell to Maxwel Cornet instead, and he rammed it past Ederson in goal.

The whole stadium appeared stunned. City’s fans and momentarily Lyon’s, too. They feared walking onto one here, the third best team in France, having already seen what England’s fourth-best team had done to Ligue 1’s Champions.

Instead, City went further behind, allowing Fekir to march through the centre a minute before half-time, David Silva and John Stones in attendance, but neither shutting him down with the commitment shown at Anfield 24 hours earlier. Given sight of the target, Fekir shot, and scored: a reminder, perhaps, to those Premier League clubs that doubted his fitness. He looked sharp enough here. It was City who trod water.

Chances? Few. Raheem Sterling shot into the side-netting after 12 minutes, and had another effort blocked by the appropriately-named Jason Denayer four minutes later. Walker, David Silva and Sterling then combined for another shot denied, this time by goalkeeper Anthony Lopes. But it was meagre stuff.

A Delph effort cut out and limping to Lopes, a Gabriel Jesus header that was no test. Lyon even had the best chance of the early second-half exchanges, on the hour, when Tanguy Ndombele fed Memphis Depay and the former Manchester United man sped through the middle, his shot eluding Ederson but not his right post. In the technical area, Arteta plunged his hands in his pockets, and looked less like his mentor than ever. 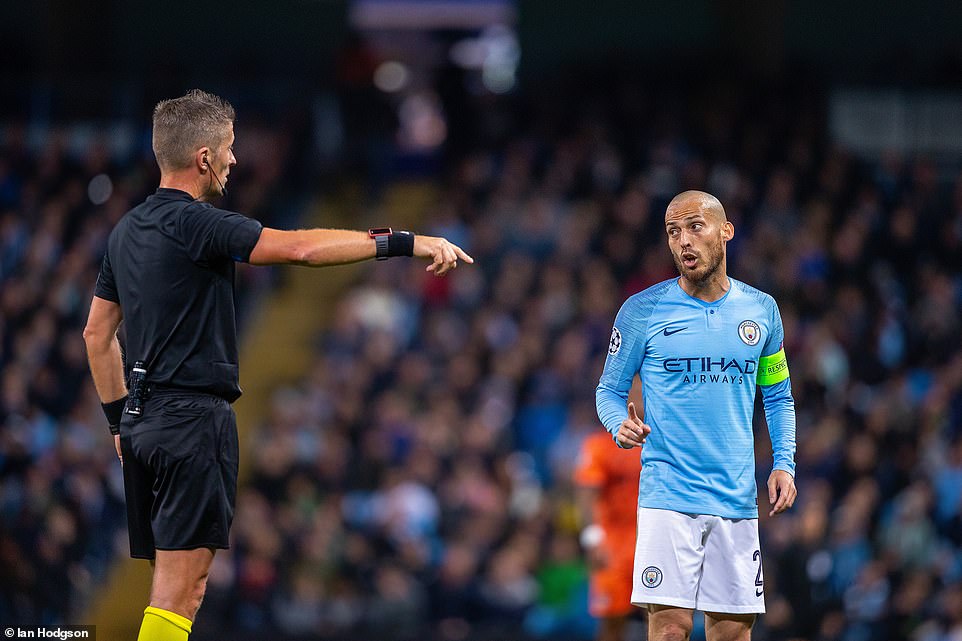 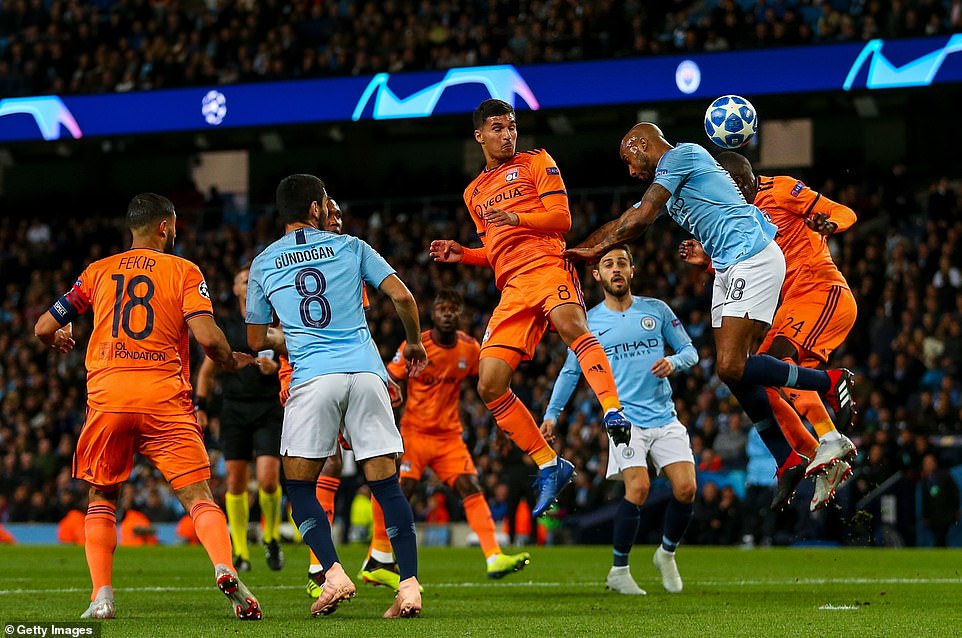