The Manchester City fan at the centre of a racism storm after yesterday’s derby match is a 40-year-old family man, MailOnline can reveal.

Anthony Burke from Manchester was filmed appearing to make racist gestures and monkey noises at midfielder Fred during the game.

The father appears to have served in Northern Ireland with the British Army and according to his social media is a civil engineering manager at Kier Group.

Burke’s ex-partner has told Mailonline he was arrested this morning by police.

Amy, of Wythenshawe, Manchester said: ‘He is with the police – he has been arrested.

‘He was arrested this morning. He doesn’t live with me. It’s horrible – I have had death threats and my kids.

‘I have been in tears. I am really surprised – this is not like him – his family are black.

‘I keep watching the footage back and I can’t say whether he’s done it or not. Has he done it or hasn’t he done it?

‘I just can’t say and I haven’t spoken to him.’

She added: ‘It’s amazing how you can get famous for the wrong thing.’ 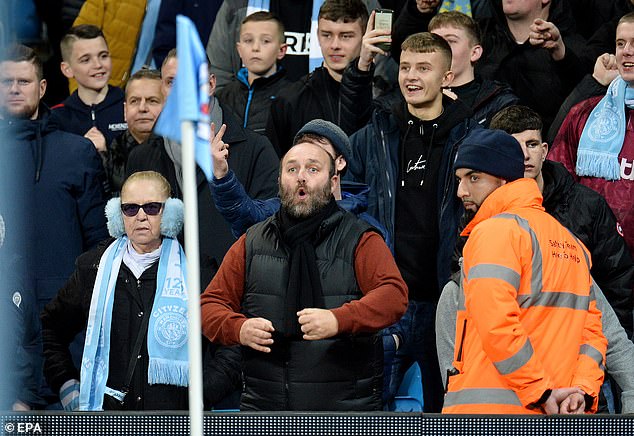 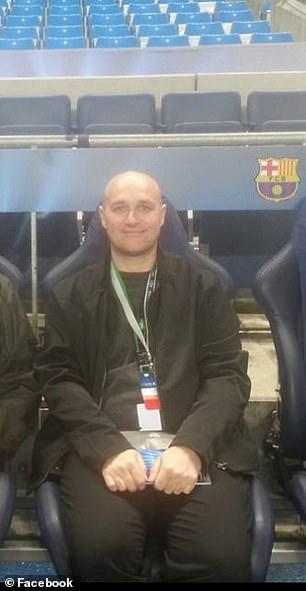 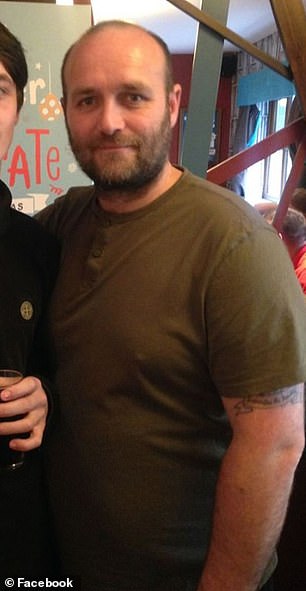 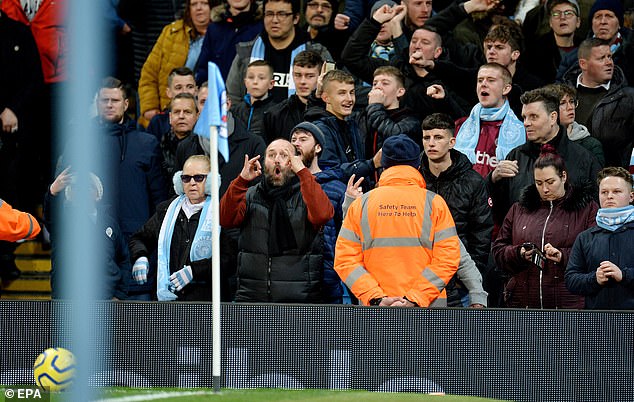 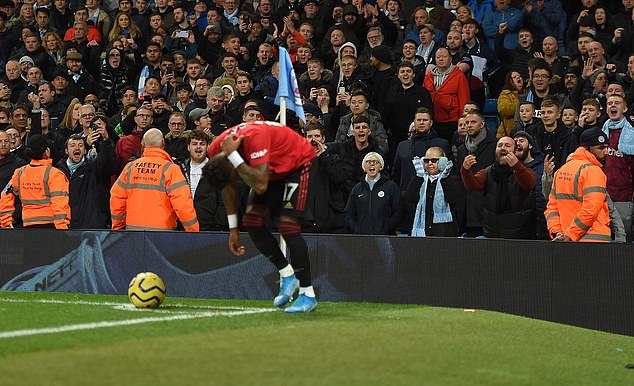 Kier Group plc tweeted this morning: ‘We’re aware of a video circulating on social media. We take allegations and instances of racism very seriously and are currently investigating potential links between the individual involved and Kier.’

Players were targeted with racist abuse and had objects thrown at them by City fans during the Premier League clash at the Etihad Stadium.

Following United’s 2-1 victory, winger Jesse Lingard tweeted: ‘Not even this idiot can ruin tonight’s feeling, shameful behaviour, it may be the derby but there is never ever a reason to be racist!’

Striker Marcus Rashford posted: ‘Can’t beat a derby win. Stood up to EVERYTHING thrown at us & got what we deserved.’

And Ashley Young added: ‘Should never have to post anything like this because I’d have thought it’s obvious but racism has no place in football or society.

‘Kudos to @ManchesterCity for the swift statement, I hope the individual is properly dealt with.’ 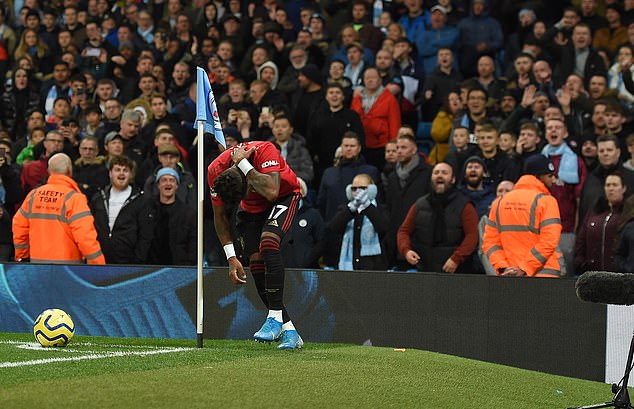 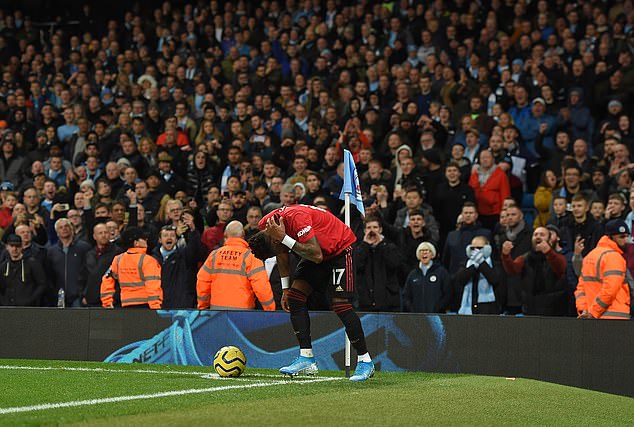 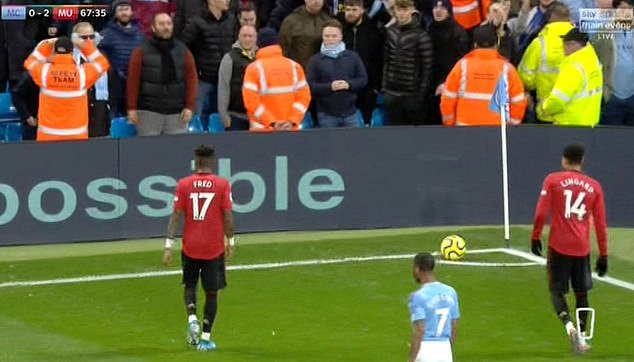 Sportsmail understands the incident was seen by United officials on their phones and passed on to stewards who reported it to the control centre where all the CCTV is.

The fan remained in the ground for a while but it is unclear if he left or was kicked out.

Both Manchester City and Greater Manchester Police are looking to establish his identity.

Fred had already been struck by a water bottle and lighter thrown by a City fan and was then seen clutching his neck in pain.

He had gone over to take a corner kick just after the hour mark where he was met by many disgruntled home fans.

The City supporters then began to jeer the United midfielder before beginning to throw objects in his direction – with a couple striking him.

City fans continued to cause unsavoury scenes during the corner kick due to frustration their side were 2-0 down. 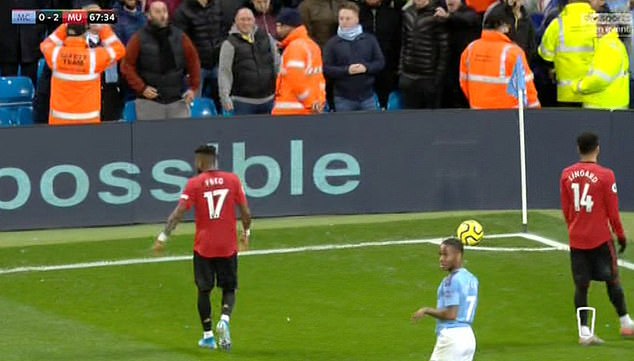 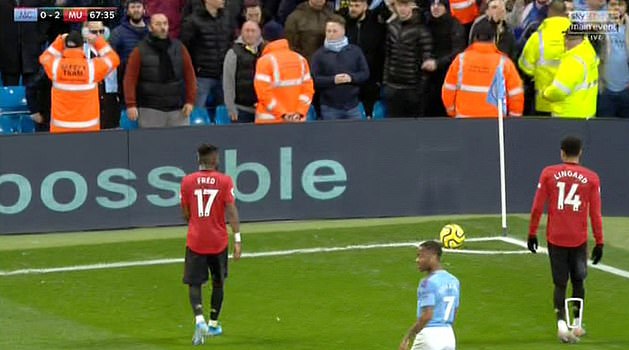 After the game, Fred said: ‘Unfortunately, we are still in a backward society. [It is a shame] we still have to live with that in 2019. On the field, I didn’t see anything. I saw it only in the locker room afterwards.

‘The guys showed me. He even threw a lighter and it hit me. I try not to care about that. I try to look ahead. Unfortunately, this is happening in some stadiums. It happened here, it happened in Ukraine with some friends. It’s sad, but we have to keep our heads up and forget about that.

‘We can’t give them any attention because that’s all they want. I spoke to the referee after the match, they will do something about it and that’s all. We are all the same regardless of skin color, hair and gender.

Boris to blame? You can’t be serious, Gary

Speaking on Sky Sports, Neville said: ‘You are watching the Prime Minister’s debate last night where he [Mr Johnson] is talking about migration to this country, and people having to have certain levels. It fuels it all the time.

‘It has got worse over the last few years in this country and not just in football.’

Others challenged Mr Corbyn. Rob Hulley tweeted: ‘Why blame Boris for racism, it was here before him and will be here a long time after him.’

Another user replied to Neville, telling him: ‘Stick to football and keep your political views to yourself.’

‘We came from the same place and we all go to the same place when it’s all said and done. Thank God I have a lot of friends here in the locker room who hugged me, like Lingard. I don’t want to think about it. I just want to move on.’

United manager Ole Gunnar Solskjaer was angry amid the fallout from more racism in a high-profile game.

‘I’ve seen it on the video,’ he said. ‘Fred and Jesse (Lingard) in the corner taking coins from the City fans first of all, so they’ve got to go away.

‘And then there’s this not-so-intelligent fella chanting racist abuse towards my two players and I hope City and the authorities will deal with it, because he shouldn’t be watching football again. Not live, anyway.

‘We have to stamp it out. We keep talking about it every single week and it’s not acceptable. He should not be allowed back into a ground. That’s how simple it is.’

English football’s anti-racism body, Kick It Out, said it had been ‘inundated with reports of alleged racist abuse from a number of individuals’ at the game.

‘The club operates a zero tolerance policy regarding discrimination of any kind, and anyone found guilty of racial abuse will be banned from the club for life.’

The abuse also prompted a huge outcry on social media and Piers Morgan labelled the suspect as a ‘racist, thick Neanderthal’. 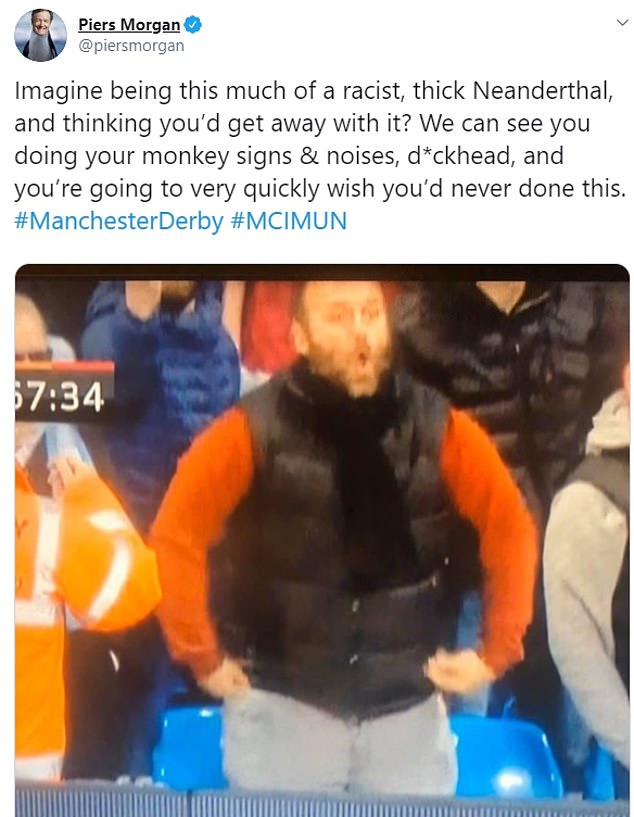 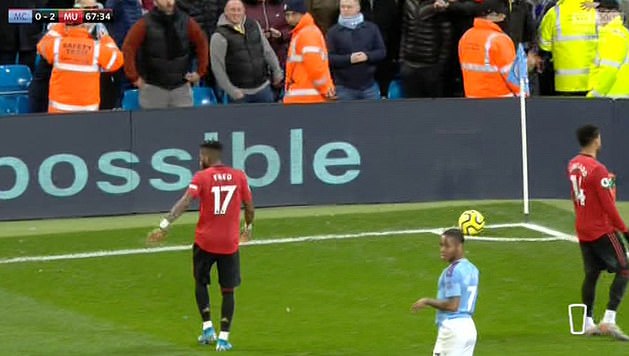 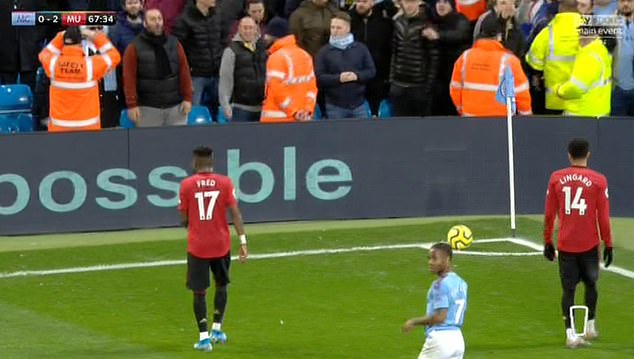 The incident occurred nearly a year to the day that Raheem Sterling faced similar unsavoury abuse at Stamford Bridge from a fan who Chelsea banned permanently from the ground in July.

Racism has blighted the game this year and England’s Euro qualifier was suspended in Bulgaria after home supporters directed their racist vitriol at Gareth Southgate’s black players in October.

Manchester City released a statement after Saturday’s game and stated: ‘Manchester City FC are aware of a video circulating on social media which appears to show a supporter making racial gestures during the second half of the match against Manchester United this evening.

‘Officials from the Club are working with Greater Manchester Police in order to help them identify any individuals concerned and assist with their enquiries.

‘The club are also working with GMP regarding an instance of objects being thrown onto the field of play.’ 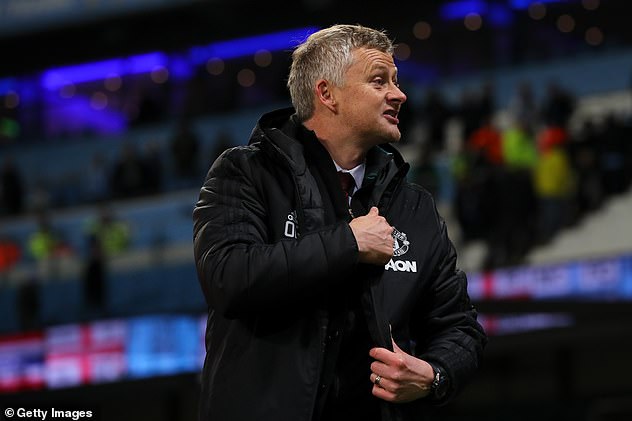 Former City defender Micah Richards called the actions ‘disheartening’ and believes that while the whole ground should not be blamed, no player should feel judged by the colour of their skin.

He told Sky Sports: ‘It’s difficult because social media’s so back nowadays. Maybe ten years ago that wouldn’t have been seen.

‘You can’t blame the whole ground, you can’t blame Man City, it’s just one fan. You shouldn’t be judged by the colour of your skin or gender. It’s just disheartening.’

Gary Neville and Jamie Redknapp were equally critical of the latest instant of players suffering racist abuse, with the former stating that the issue is pandemic while Redknapp reiterated the point that it transcends the game of football.

‘Sterling has been powerful on this issue. There was a horrific incident about [Chris] Smalling and [Romelu] Lukaku. It’s rampant in this country,’ Neville said.

‘It’s happening not just in Bulgaria, it’s happening in our country. We’re poor at dealing with it themselves. It’s a problem for everybody and it won’t go away until punishments are handed out.

‘It’s what Man City can do themselves which is banning the fan for life. It’s what the authorities do to stop it out for good.

‘It’s something that’s got worse in this country, not just in football.’

Redknapp added: ‘It’s a society problem. Something has to be done about it. It’s not just about banning him from a football game.

‘It shows there’s a problem in the environment when he feels he can come to a game and racially abuse young men. It’s disgusting.’ 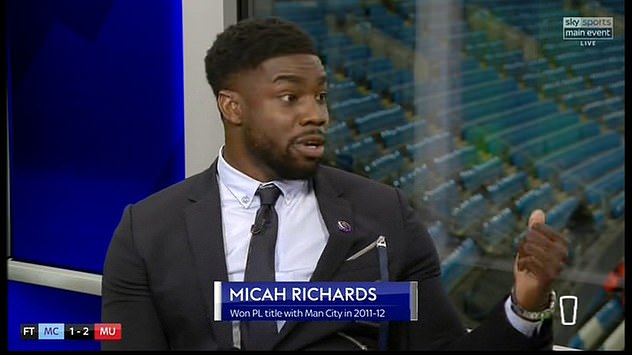 We have been inundated with reports of alleged racist abuse from a number of individuals during this evenings Manchester Derby.

We will be contacting both clubs to offer our support and hope swift action is taken to identify the offenders.

Earlier Saturday, a fourth-tier game in England was temporarily stopped by the referee for racism.

Forest Green Rovers pledged to take stringent action against a supporter for racially abusing a Scunthorpe player during the League Two game.

Referee John Busby spoke to both managers before a stadium announcement was relayed to the crowd, with the game paused.

The fan involved was quickly identified and an investigation immediately launched, with the perpetrator set to be handed a lifetime ban by the club.

Forest Green Rovers spokesman Will Guyatt said: ‘We can confirm we are currently investigating a report of racist abuse from a single fan towards an opposition player.

‘We will be talking to that person as soon as possible. We would like to make clear that the club does not tolerate racism, and the ongoing investigation will end with a lifetime ban if found guilty.’