Manchester City stars jet off to Lyon decked out in bizarre jacket blazer hybrid outfits (which would set you back around £1,800)… but which of Pep Guardiola’s stars wears it best?

Manchester City’s first team were kitted out in yet another extravagant outfit as they travelled to France ahead of their Champions League showdown with Lyon.

Their partnership with DSquared2 has seen City’s players arrive at Manchester Airport wearing quirky attire and on Monday it was no different.

Their latest outfit saw the likes of Raheem Sterling and Sergio Aguero kitted out in a black turtle neck top, black trousers and then a bizarre hooded jacket blazer. 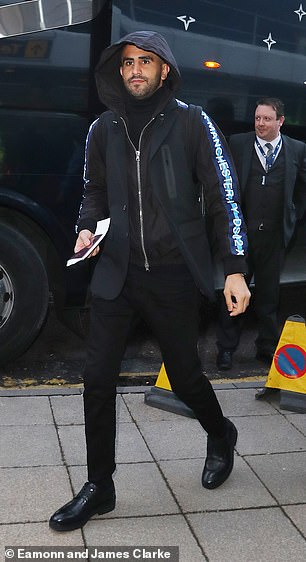 Here’s a breakdown of similar products from Dsquared2’s official website:

‘Manchester City’ is written onto the side of the jacket as the unique range is exclusive to the club.

The Premier League champions signed a multi-year contract with the international fashion house back in October 2016.

The agreement sees Dsquared2 design outfits for City’s away games in the Champions League.

Fans are also able to take advantage of the partnership as Dsquared2 make co-branded products available to supporters.

They make think twice about purchasing this outfit as their outfits usually cost at least £1,800 if you want to copy the whole look.

The exact outfit cannot be found on Dsquared2’s official website but similar products would set back you back £200 short of £2,000.

Victory over Lyon would seal progression to the knockout stages of the Champions League for City and they will be looking for revenge after Lyon beat them 2-1 at the Etihad back in September.