Manchester City will express ‘serious concerns’ to police after it emerged that a group of Liverpool supporters are planning a hostile reception for their team coach ahead of next month’s Champions League showdown.

A poster circulating on social media is urging Liverpool fans to gather on the streets close to Anfield more than two hours before kick-off on April 4 to give Pep Guardiola and his squad a ‘coach greeting’ – and calls on supporters to arrive armed with pyrotechnics.

Sportsmail understands that the poster has caused alarm at the Etihad Stadium. City declined to comment but officials, wary of a similar reception at the height of the 2014 Premier League title race – which saw one coach carrying visiting fans pelted with bottles and rocks – are to take action.

They will speak to both Liverpool and Greater Manchester Police, who are then expected to raise the matter with their colleagues on Merseyside.

The poster declares: ‘We’re going to show them exactly what money can’t buy,’ and adds: ‘Bring your flares and flags. Banners and bangers. Pints and Pyro. There will be thousands of scouse voices ready to scare em back to Mancland with their tails between their legs before the match even starts.’

It adds: ‘We’re going to show them exactly what money can’t buy.’

The poster was shared by the Redmen TV Twitter account, which has 133,000 followers. It was retweeted 327 times and liked 480 times on Monday afternoon.

The return leg is at the Etihad on April 10 and there are fears any kind of volatile reception for City’s coach could prompt similar scenes when the teams meet again in Manchester. 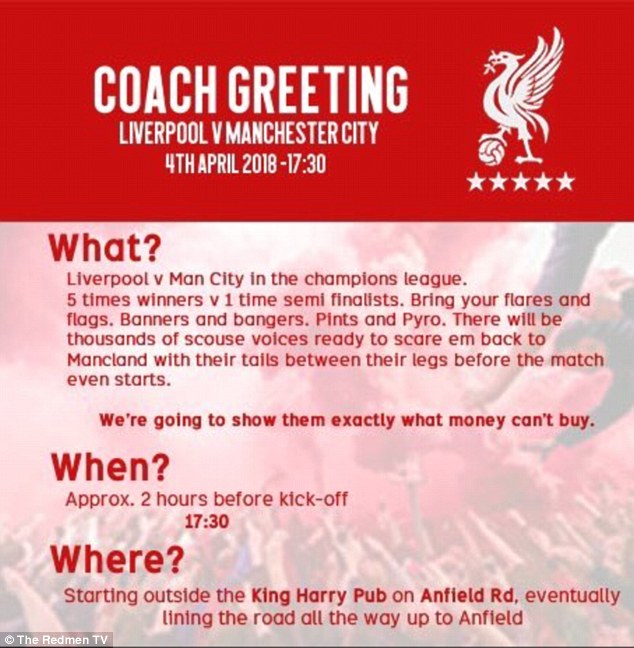 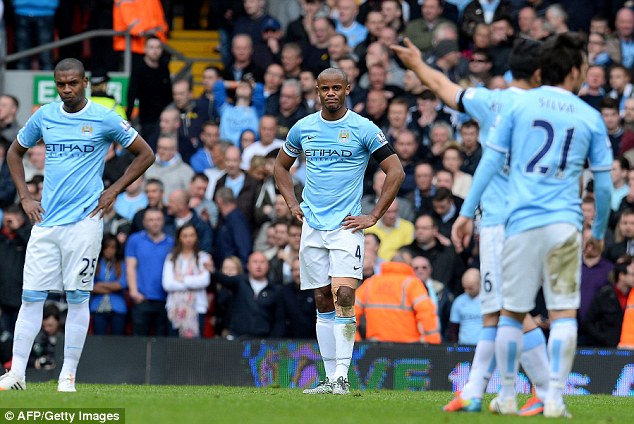 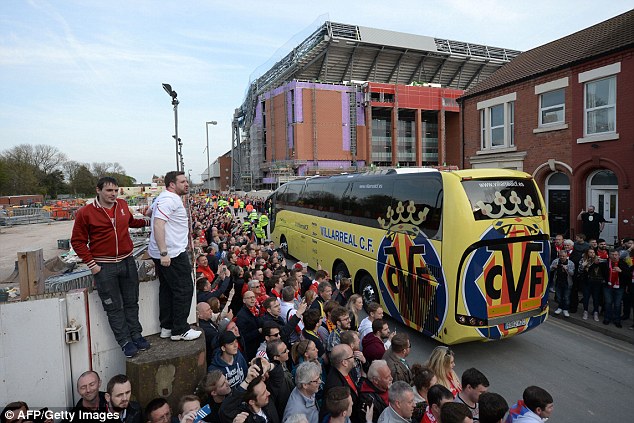 Ahead of the 2016 Europa League semi-final with Villarreal, a hostile welcome was given to the Spanish side, who passed through streets lined with supporters chanting and setting off red flares.

Liverpool went on to win the second leg fixture 3-0, and progress 3-1 on aggregate.

At the 2014 fixture between the two clubs, a number of City fans were left shaken when their minibus was targeted as it made its way to Anfield, with a window smashed as thugs threw stones and bricks.