JACK GAUGHAN: Manchester City thrashed FC Copenhagen without getting out of first gear – games like this are huge for young players but offer nothing to the congested calendar

By the time Erling Haaland had inevitably helped himself for the first time, in the seventh minute, FC Copenhagen had touched the football on 20 occasions.

Half of those were inside their own penalty box. One of them, two seconds into something never resembling a contest, proved why the group stage can be something of a torturous exercise.

Davit Khocholava received possession from the kick off. He might have looked to give it a full back, keep the thing for a bit. He might have done – but didn’t. 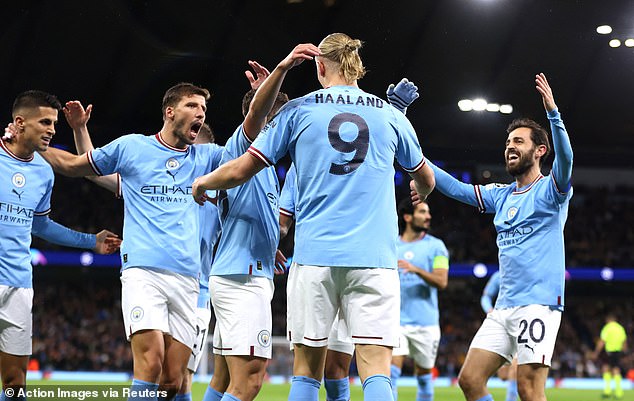 Khocholava, a Georgia international, launched one 70 yards straight into the arms of Ederson. Copenhagen immediately retreated.

And largely, that is what we are dealing with before the knockout stages in this competition. Copenhagen, who were soundly beaten away at Borussia Dortmund as well, lie eighth in the Danish top flight and have sacked their manager.

The other team in this group, Sevilla – sitting one point above the relegation zone in La Liga – were three down at home against Dortmund on Wednesday night.

The same as Copenhagen here in Manchester, suffering an onslaught from the off, from Khocholava’s long punt and only kept in it by goalkeeper Kamil Grabara, formerly of Huddersfield Town.

City are now only one point from progression already and face the same whipping boys again next week. 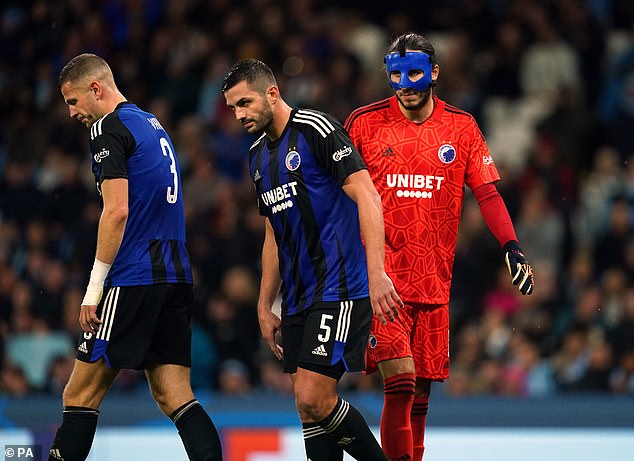 This is not a competitive foursome, and certainly not showcasing the best the continent can offer while being simultaneously, and sadly, indicative of European football pre-Christmas.

Will the new ‘Swiss model’ – with one massive league – present any additional intrigue when it is introduced from 2024? Probably not, although those paying to watch the pinnacle of club football before the final rounds must hope so.

But for now, City can only beat what is in front of them. Very careful to pay their opponents full respect on the eve of this meeting, Pep Guardiola used it to give a first start of the season to Aymeric Laporte and he could not have wished for a calmer return, while also tinkering with his formation.

Haaland was afforded a rest at the break after scoring twice, promising teenage full backs Rico Lewis and Josh Wilson-Esbrand both later handed European debuts from the bench.

Another prodigious talent, Cole Palmer, got a full run in his natural position on the right and impressed once again. Games like these are huge for the kids but are offering nothing to the calendar.