Have-a-go hero, 50, is knocked out and left with a broken nose and jaw after he stepped in to stop two men attacking an Asian boy in a ‘racist’ street attack

A man was left with a broken nose and fractured jaw after he tried to stop a ‘racially-motivated hate crime’ in the street.

The 50-year-old, who has worked as a ministerial advisor in Oman and now runs a street food stall in Manchester, said the men screamed ‘speak f***ing English’ at the victim as they punched him and stamped on him.

Clive Pyott, 50, required surgery after he intervened when a mob was racially abusing and attacking an Asian boy in Hulme, Greater Manchester

He told the Manchester Evening News: ‘I heard some noise outside the front of my house, so I went outside.’

‘I saw two men running up the street past the bus stop.

‘One of them ran up to an Asian boy and just punched him.

‘He fell on the floor and then they stamped on his face while shouting “speak f***ing English”.’

Mr Pyott said he saw the men stamp on the man’s head ‘about five times’. At that point, he intervened.

He added: ‘I shouted ‘the guy’s on the floor, leave him be’. I don’t have a great recollection after that, but I think one of the men said to me ‘you want to be next?”

Mr Pyott said he blacked out after being hit.

Mobile phone footage taken by an onlooker appears to show a man approach Mr Pyott before knocking him to the ground.

The men were then seen running into a pub.

He continued: ‘When I came around, I went back to my house covered in blood. I phoned the police, who then dispatched an ambulance.

‘I left the hospital at seven the next morning, with a broken nose and a fractured jaw.’ 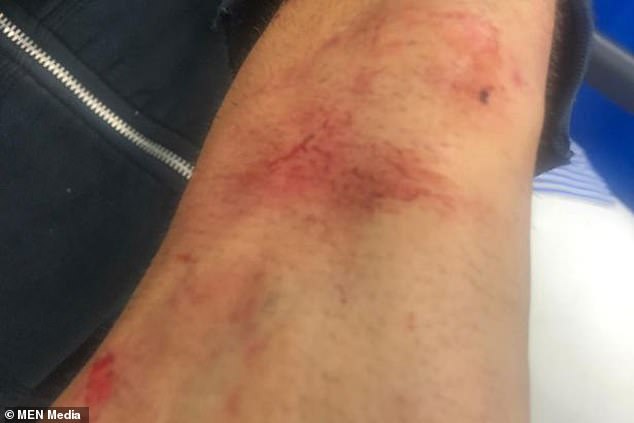 Mr Pyott said the incident, which happened on the evening of August 24, has been reported to police.

He added: ‘The main concern for me is that these guys committed a racial attack that should never happened.

‘I’ve set up 17 community engagement projects and worked with the council a number of times.

‘I’ve done a lot to engage people and create positive lifestyles in the community.

‘People have been shocked, people who knew me and had heard about the incident were very upset and angry that this had happened.’

Since the attack, Mr Pyott has had to have extensive surgery to sort his broken nose.

‘I’ve not been able to eat or sleep very well because of the pain,’ he said.

‘Every time I turn it hurts. I can’t breathe through my nose – and the pain in my jaw is unbearable.’

A spokesman for Greater Manchester Police said: ‘Shortly before 11.35pm on Saturday, September 24, police were called to Stretford Road, Hulme to reports that a man had been assaulted.

‘The report stated that the victim had spotted another man being assaulted and attempted to verbally intervene before the offender attacked him.

‘The victim sustained serious injuries to his face as well as cuts to his leg and wrist.’

‘Enquiries into the incident are ongoing and anybody with information is asked to contact police.’