A gun club member was photographed polishing an air pistol in his garden just days before he fired it at his neighbour in a dispute over her trespassing rabbit.

Paul Booth, 52, went berserk when he went into his conservatory and saw 49-year old Susan Davis trying black and white bunny Oreo after it escaped onto his lawn.

Booth has been given a suspended prison sentence after he fired the weapon towards the civil servant, 49, as she bent down to pick up the rabbit.

Miss Davis claims she heard something whistle past her ear as she ducked, but both she and Oreo escaped unhurt. 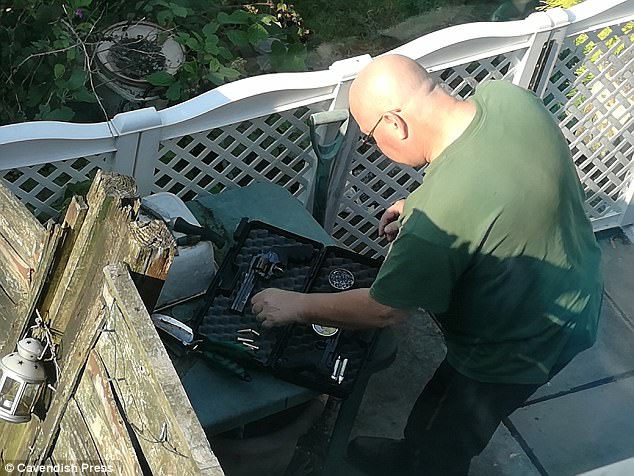 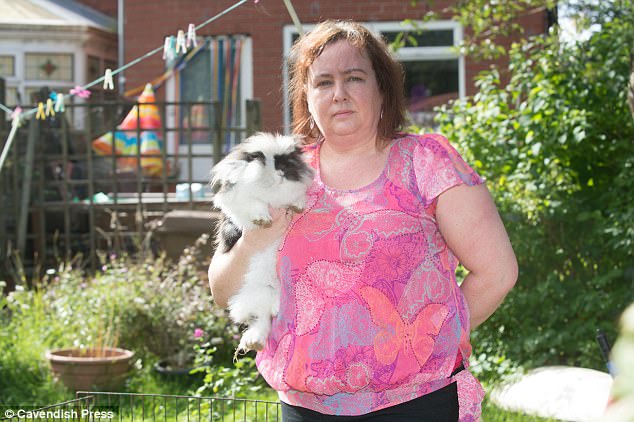 Police later arrested Booth – a member of a shooting club in Manchester – after the victim showed officers pictures she took of him a week earlier cleaning the gun and fiddling with the barrel while stood at his garden fence.

He was also ordered to pay Miss Davis £100 compensation.

After the case the victim said: ‘Thankfully, I’d just ducked out of the way because the rabbit moved – but he is obviously a good shot and could have easily hit me.

‘He could have killed me if he’d hit me in the right place. I just heard a gas cylinder shoot past me, right past my head.

‘Just months earlier I’d seen him from the upstairs window polishing the same gun, and something told me to take a picture of it.

‘Deep down I think I knew something was going to happen and I felt having picture evidence of the kind of guns he owned would work in my favour. 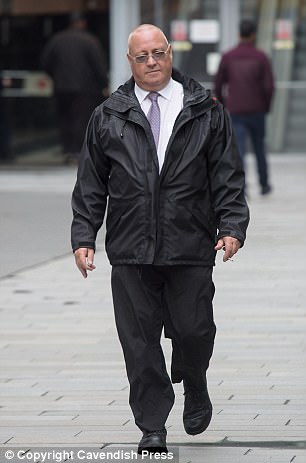 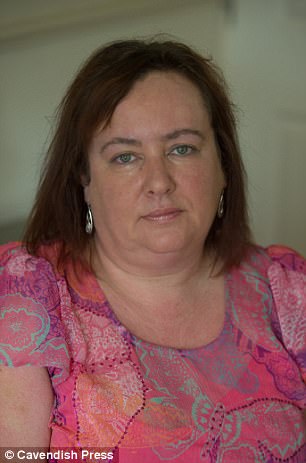 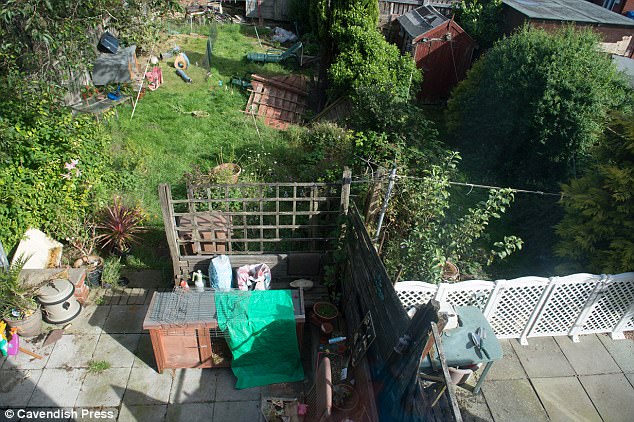 This is the back garden where the dispute over Oreo took place (Miss Davis’ left, Mr Booth’s  right)

‘Funnily enough the gun I pictured him cleaning, loading and aiming was the same gun he used to shoot me.

‘I was so glad I had my back to him, because otherwise I’d have been absolutely terrified.

‘I didn’t know what was happening until I heard the bullet whiz past and my blood ran cold. I was just glad my daughter didn’t see it all.’

Booth who relies on handouts from his family due to back problems became embroiled in a ten year feud with Miss Davis which began following a petty dispute about parking.

Miss Davis added: ‘There was no reason for him to be the way he was being. He was so frustrating.

‘We went through a period where he would bang on the walls which was probably the most upsetting thing. It went on for absolute years.

‘His dad died and after his mum went in the home he was very much on his own and he never had anybody round there – he was a loner.

‘The banging would happen four or five times a week from around 4 in the morning. He would thud the walls chanting and singing football songs and it was horrific. It was like Chinese water torture and I was so sleep deprived. 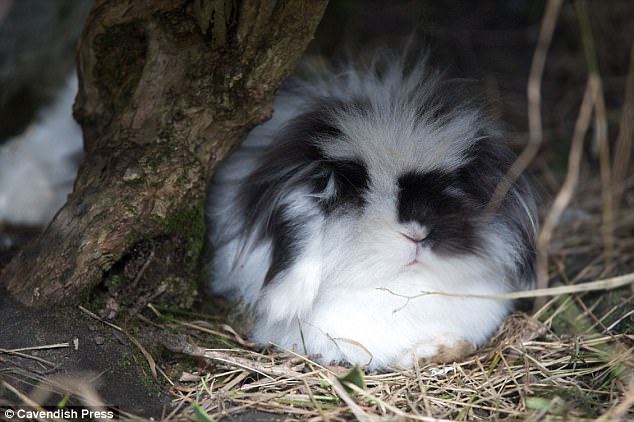 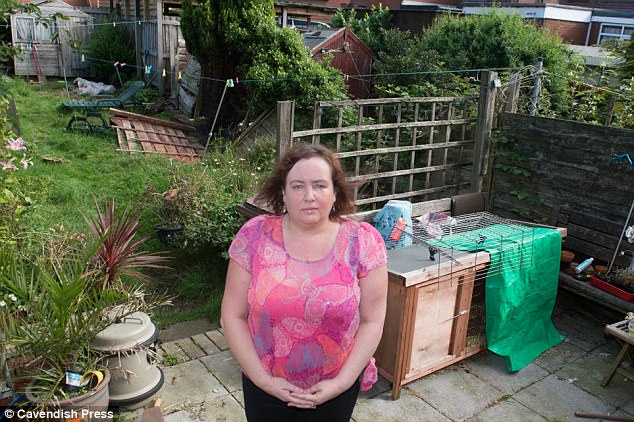 ‘I went to the police but they said it only noise pollution so they couldn’t do anything.’

The incident occurred in March after Oreo escaped from her hutch and darted into Booth’s garden through a gap in a broken section of their adjoining fence.

Miss Davis said: ‘I thought he’d shoot her because he is that type and my 19-year old daughter was getting really distressed because she could see the rabbit was out and would have hated anything to happen to her.

‘I went round and knocked on his door three times but there was no answer. Then I went round to see if the back gate was open but it was locked.

‘The only option was to go through the broken fence. I was chasing the rabbit round his garden a couple of minutes.

‘He appeared in the conservatory and said “what the f*** are you doing in my garden?” so I explained I was just trying to get the rabbit.’

Miss Davis told Booth she had knocked on his door but he retorted: ‘you should have f***ing knocked harder’. 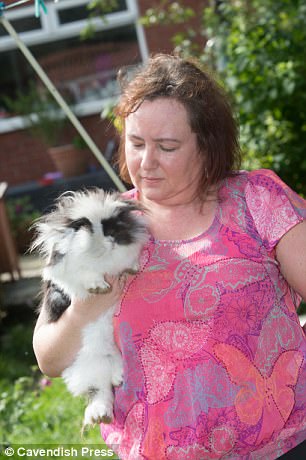 Miss Davis gives Oreo a cuddle in their back garden

She added: ‘I said I’d be two minutes but he went in and slammed the door, then came back out and said “if you don’t get out my f***ing garden I’m going to get a firearm”.

‘My blood went cold. It was so extreme and I didn’t know what he was capable of. I said just give me two minutes, I will grab the rabbit and be gone in a flash.

‘I had my back to him, and my partner was behind the fence but he came out behind me and opened fire. I was shocked.’

In court Booth’s lawyer Humayun Khan said: ‘There had been friction between the neighbours for some 10 years and unfortunately this developed into bad blood between them and created a neighbours’ dispute.

‘He is a member of a shooting club. He had seen the victim in his garden but disputes the fact that she says she knocked on his front door. He also says that he has CCTV footage showing that she didn’t. He denies firing the pistol towards the victim but admits that he fired it inside his conservatory.

‘There were no pellets in the gun it was simply gas. He doesn’t deny firing the pistol. He did not mean to cause anybody harm just fear to get her off of his property. He knows this is a serious offence and he now has a serious conviction to his name.’

Booth was also ordered to pay £250 in prosecution costs and a £115 victim surcharge.

JP Toni Pine told him: ‘We have considered this case carefully and we are satisfied that this was a serious enough case that it crosses the custody threshold as there was a weapon used and there were other people present.

‘But the have decided that is appropriate to suspend this sentence and order you to pay compensation.’