Manchester United will have it all to do in the second-leg of their Champions League quarter-final with Barcelona after losing 1-0 at Old Trafford.

Ole Gunnar Solskjaer’s side would have been hoping to get off to a fast start on Wednesday but their plans went out the window after Luke Shaw’s own goal from Luis Suarez’s header gave Barcelona the lead.

The Spanish giants managed to hold onto victory in Manchester, leaving them heavy favourites to progress to the Champions League semi-finals. Here, Sportsmail’s CHRIS WHEELER runs the rule over the players at Old Trafford… 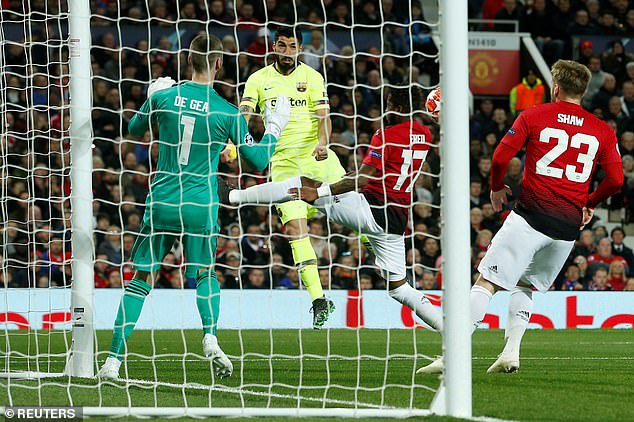 DAVID DE GEA 7 – Great reaction save with his left foot to deny Coutinho kept United in the tie. Had no chance with the goal.

CHRIS SMALLING 6.5 – Left Messi with a bloody nose with a first-half challenge. The Argentine wasn’t the same after that.

VICTOR LINDELOF 6 – The Swede almost let in Suarez with a poor clearance but did very little else wrong besides.

LUKE SHAW 6 – Scored an own-goal and got himself banned for the second leg by fouling Messi inside the opening 20 minutes but recovered.

ASHLEY YOUNG 5 – Lucky to escape a ban for early foul on Coutinho and was guilty of poor distribution down the United right.

FRED 6 – Wasted a free kick from a promising position in the first half and struggled to impose himself on the game.

PAUL POGBA 6 – Grew into the game after a slow start but this was still short of the world-class display we expect.

DIOGO DALOT 7 – Played on the left to counter the threat of Semedo and performed well, but should have done better with free header before half-time.

MARCUS RASHFORD 6.5 – Flashed first-half free kick over but didn’t get the opportunities his energy deserved.

ROMELU LUKAKU 6 – The two-goal hero in Paris looked off the pace here and was the first to be replaced by Martial.

Manager: Ole Gunnar Solskjaer 6.5 – A fourth defeat in five games but he will be pleased United are still in the game after conceding early on.

GERARD PIQUE 7 – Composed display from the former United defender on his first return to Old Trafford since 2008.

CLEMENT LENGLET 5.5 – Got caught in possession several times and was lucky United were not more clinical in punishing him.

JORDI ALBA 6.5 – Held his own in a duel with Young despite his dramatic reaction to an accidental collision with the United skipper.

ARTHUR 5.5 – Industrious if unspectacular display form the Brazilian and he was replaced by Sergio Roberto.

SERGIO BUSQUETS 5.5 – Floored McTominay early on and trod a fine line after being booked for another foul on Pogba.

IVAN RAKITIC 6 – Started well on his 100th appearance in Europe but faded a little after that.

LIONEL MESSI 6 – Run in behind and cross led to Barca goal but United were able to keep the Barca danger man relatively quiet.

LUIS SUAREZ 7 – Ex-Liverpool man came back to haunt United with the header that led to the goal, but fired another chance wide.

PHILIPPE COUTINHO 6 – Another old rival who was a little subdued and became the first Barca player to be replaced.

Manager: Ernesto Valverde 7 – This wasn’t a classic Barca performance but they have the away goal and the advantage in this quarter-final.

Referee: Gianluca Rocchi (Italy) 7 – Got the big calls right, awarding the goal with the help of VAR and dismissing McTominay’s claims for a penalty.