Manchester United 1-1 Chelsea: Cesar Azpilicueta is sent flying into photographer, Eden Hazard lets out almighty yawn at the Theatre of Dreams while fans are given clappers for support – THINGS YOU MISSED

Manchester United were held to a 1-1 draw at Old Trafford on Sunday as Marcos Alonso cancelled out Juan Mata’s opening goal.

The result leaves Chelsea two points behind Tottenham in fourth while United sit in sixth, three points adrift of the Champions League places.

As ever, Sportsmail were on hand to pick up any scraps you might have missed from the encounter at Old Trafford on Sunday.

AZPILICUETA SENT FLYING INTO A PHOTOGRAPHER

When it comes to trying to muscle Romelu Lukaku off the ball, Cesar Azpilicueta really didn’t stand a chance.

As the two fought for possession, the United striker easily shrugged off the Chelsea skipper which sent the Spaniard hurtling off the pitch.

With all of his momentum, Azpilicueta struggled to slow himself down in time and had to use photographer John Peters to stop himself from going any further.

Thankfully, both player and photographer were okay following the incident. 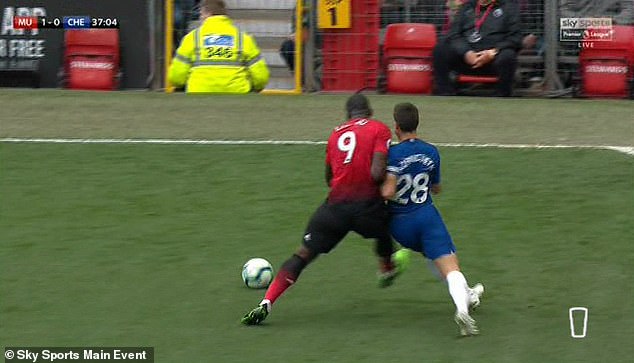 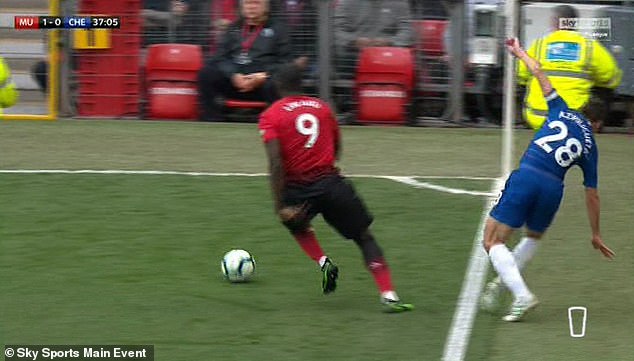 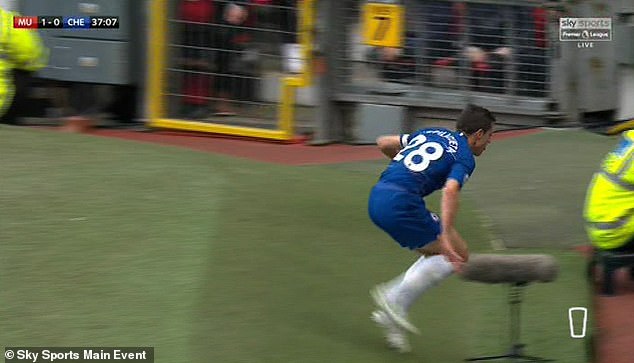 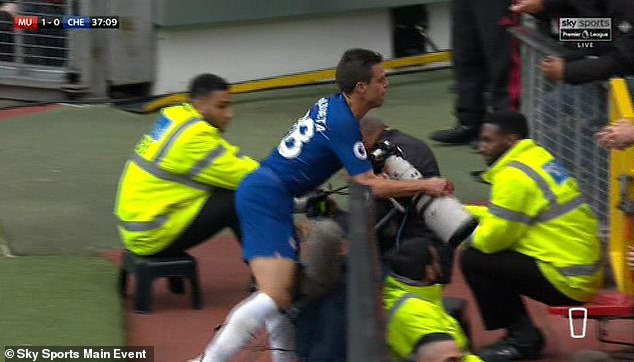 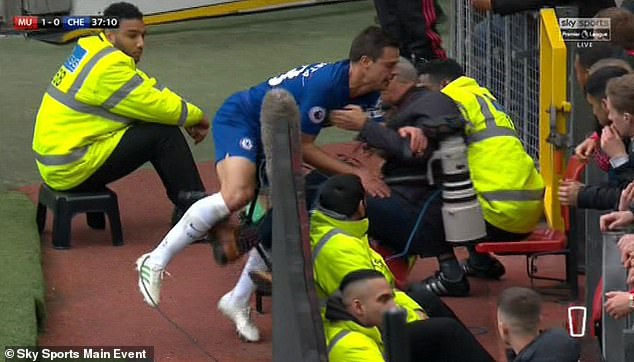 Thankfully, both player and photographer were okay following the incident on Sunday

It’s fair to say that David de Gea is having a torrid time at the moment.

The Spanish goalkeeper has made the headlines recently for making several uncharacteristic mistakes and it seems its starting to take its toll on De Gea.

Chelsea’s equaliser on Sunday came from yet another De Gea mistake – the third time his error has led to a goal in his last four games.

To put that into perspective, that’s as many in his previous 123 matches combined for United. 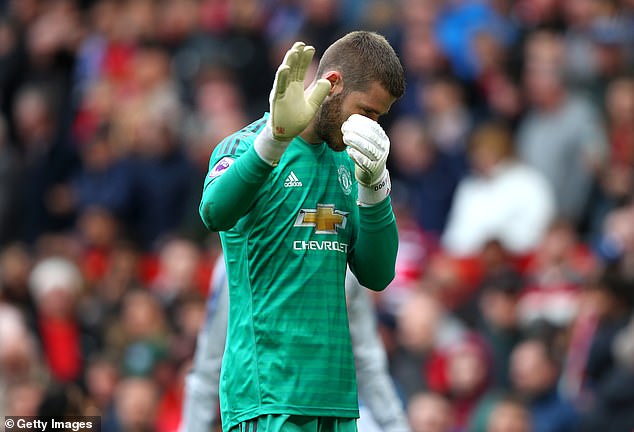 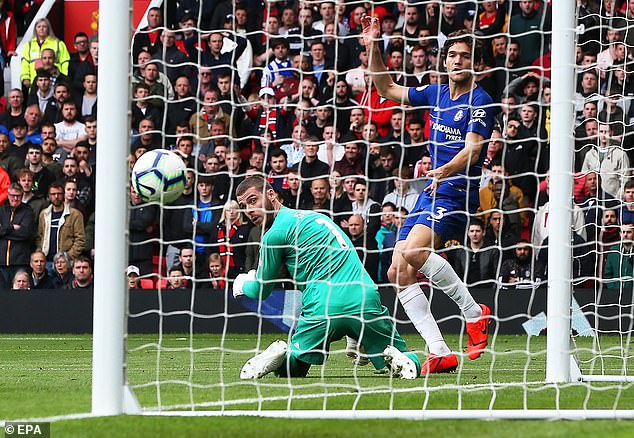 3 – David de Gea has made three errors leading to goals in his last four games in all competitions for Manchester United – as many as in his previous 123 matches combined for the Red Devils. Sloppy. #MUNCHE pic.twitter.com/Tbq59cYSU7

As the two teams lined up in the tunnel, the cameras picked up the Blues talisman looking quite relaxed moments before kick off.

United’s defenders may have lost sleep thinking about how they were going to deal with Hazard at the Theatre of Dreams, but they coped fairly well against all of Chelsea’s attackers despite De Gea’s nightmare. 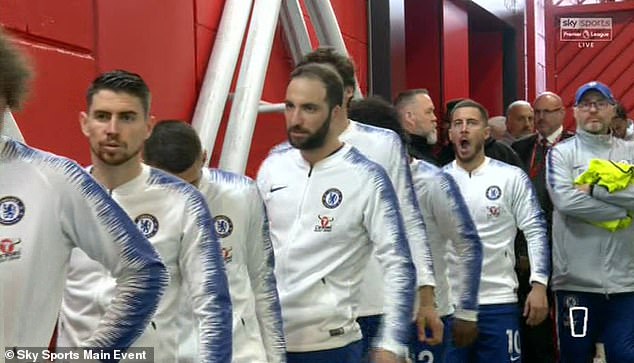 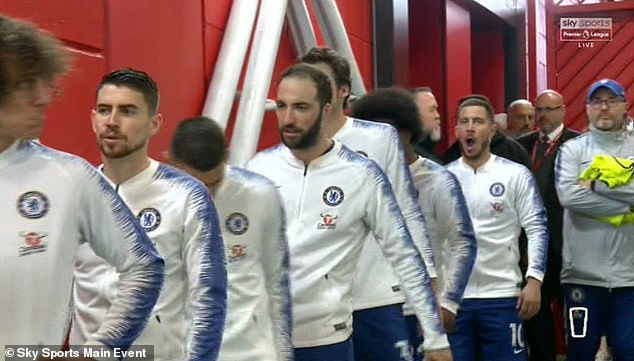 Manchester United placed clappers in every seat ahead of kick off at Old Trafford.

It appears the club wanted to enhance the atmosphere at the biggest stadium in the Premier League.

Some fans were embarrassed by stunt and took to Twitter to tell the club how they felt.

One fan said: ‘Clappers on all the seats at Old Trafford. This is horrible to see.’ 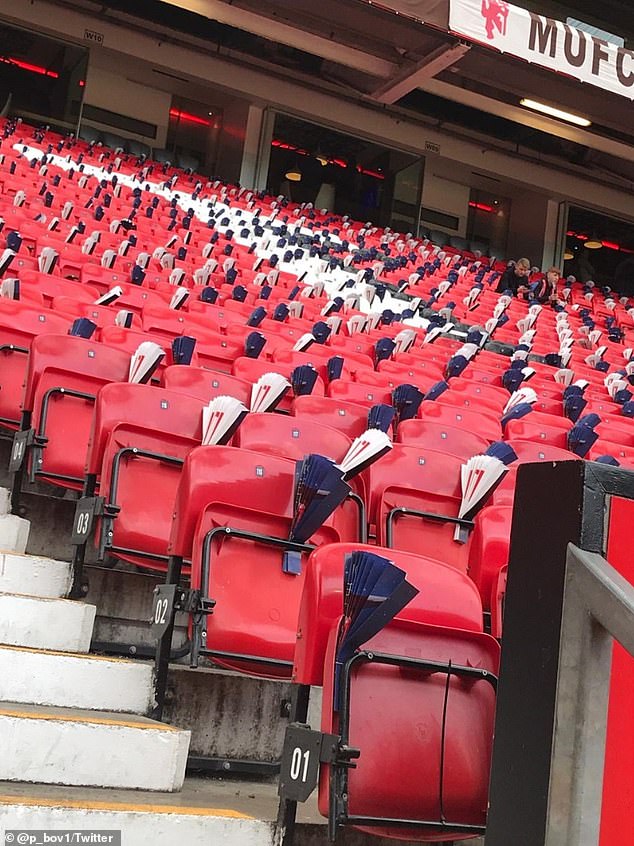 Clappers placed on the seats at Old Trafford to enhance the noise. Feels like something Twitter will deal with very calmly.

Clappers on all the seats at old trafford. This is horrible to see #MUFC