Manchester United fined £82,000 for failing to control players against Newcastle and Chelsea

Manchester United are hit with an £82,000 fine from the FA for failing to control their players against Newcastle and Chelsea – with Erik ten Hag’s side surrounding the referee over controversial calls in both games

Manchester United have been fined a total of £82,000 by the FA for failing to control their players in the Premier League fixtures against Newcastle and Chelsea last month.

United accepted the charges which resulted in a £45,000 fine for the Newcastle game and £37,000 for the Chelsea game.

United players surrounded referee Craig Pawson after he disallowed a Cristiano Ronaldo goal in the goalless draw with Newcastle at Old Trafford when the Portugal star claimed a free kick had been taken and scored in an empty net. 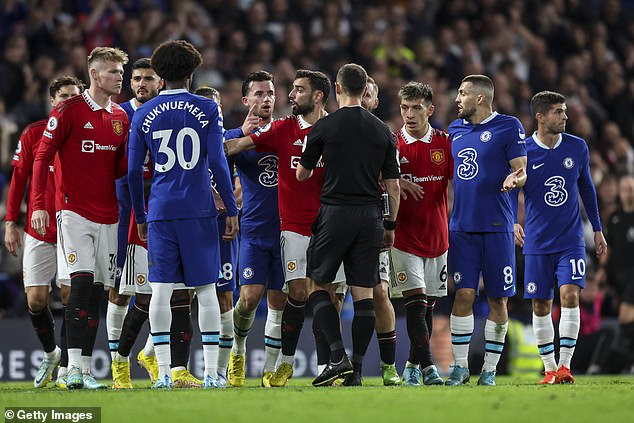 A week later, United players complained to referee Stuart Attwell when he awarded Chelsea a penalty for Scott McTominay’s challenge on Armando Broja at a corner.

An FA statement on Wednesday read: ‘Manchester United FC has been fined £82,000 in total for breaching FA Rule E20.1 during its Premier League matches against Newcastle United FC on Sunday 16 October and Chelsea FC on Saturday 22 October.

‘Manchester United FC admitted that it failed to ensure its players conducted themselves in an orderly fashion during the 49th minute of the Newcastle United FC game and the 84th minute of the Chelsea FC fixture.

‘Independent Regulatory Commissions imposed fines of £45,000 and £37,000 for the respective breaches in the Newcastle United FC and Chelsea FC matches during separate hearings.

‘The independent Regulatory Commissions’ written reasons for these individual sanctions will be published in due course.’

Ten Hag came out on the defensive for his players after the surrounding of Pawson in the Newcastle match.

‘I don’t think it was too strong,’ Ten Hag said. 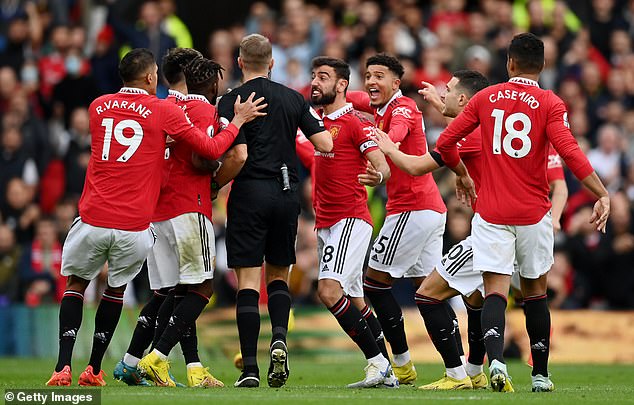 ‘It wasn’t really aggressive but I don’t know what’s happening exactly on the pitch, I was too far away. I saw it back on the video.

‘There was a touch from the Newcastle player, quite clear, and they went to the referee to ask about it.

‘I want to express that we have always accepted the referee’s decisions.

‘Quite normal that you ask why in the moment. It was a curious incident. My view is that quickly you have to accept the ref’s decision, there is VAR, you accept and move on.’