As a Liverpool legend Steven Gerrard enjoyed many trips to Old Trafford  as the Reds faced bitter rivals Manchester United – but their are some the former Reds skipper will surely be desperate to forget.

Gerrard returns to Old Trafford for the first time since taking charge at Aston Villa as his side take on United in the FA Cup third round on Monday.

For any Liverpool player, taking on fierce rivals United provides some of the most intense moments of their Anfield career and it is safe to say the ex-Reds skipper has had his fair share.

The former midfielder has experienced some of his career highs and lows from the Reds’ short journey down the East Lancs Road.

From camera kisses and Reds’ routs to disappointing defeats and marching orders, Sportsmail takes a look back at Gerrard’s best and worst moments at the Theatre of Dreams ahead of his return as Villa boss. 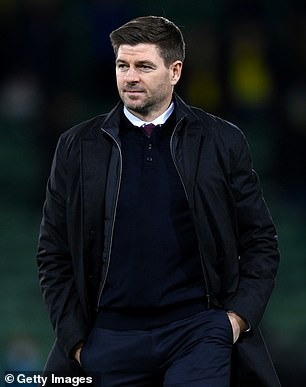 Liverpool’s 4-1 win over United in 2009 not only lives in the memory of Reds fans for obvious reasons but for Gerrard’s infamous goal celebration.

The then-Liverpool captain handed his side the lead from the spot shortly before half-time and celebrated in style by placing a smacker on the nearby camera lens.

Cristiano Ronaldo had actually opened the scoring but an all-round vintage performance from Liverpool saw Fernando Torres strike back, before Gerrard, Fabio Aurelio and Andrea Dossena rounded off the rout. 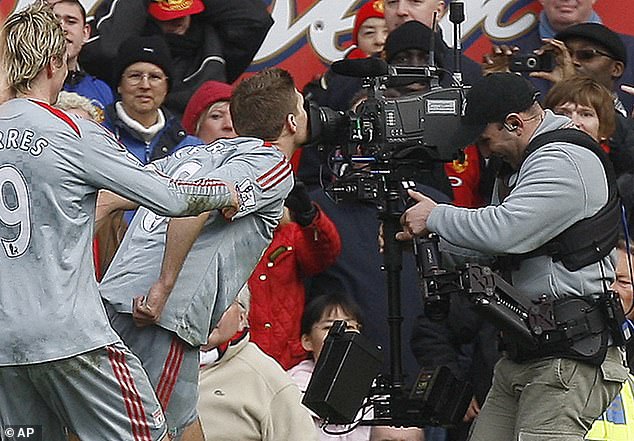 If his celebration had not given away Gerrard’s passion for the game, the fact that he later hailed the result as the Reds’ greatest away win of his Anfield career would.

‘It’s one of the most difficult games of the season, especially with the rivalry that’s between Liverpool and Manchester United, so to go there and win 4-1 and completely dominate them was fantastic,’ he said.

‘We went a goal down, but everyone was on such form that day we found a way back in and controlled from that point on. Obviously I enjoyed scoring myself, and I remember Fernando Torres having a great game, he was unplayable that day’.

The camera kiss in 2009 was not a one off as Gerrard recreated the celebration during Liverpool’s 2014 3-0 victory.

Gerrard and Co made Old Trafford their playground once again as the skipper’s double from the spot, Luis Suarez’s second-half strike and Nemanja Vidic’s sending off saw the Reds seal all three points in their title charge.

The midfielder repeated his 2009 celebration after both penalty strikes rounding off a hat-trick of camera smooches on United’s turf. 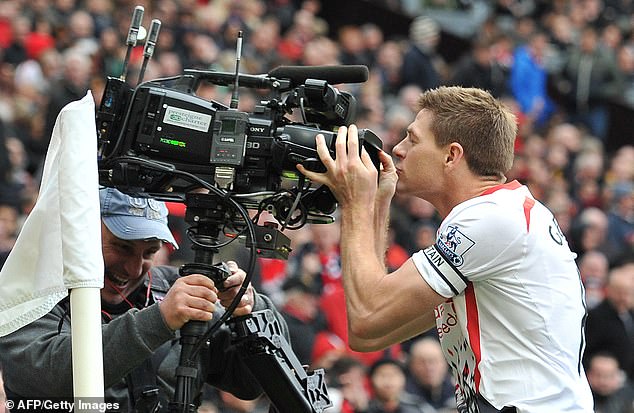 He could have also made it a hat-trick of spotkicks during the 2014 fixture but missed a third late on –  though it is doubtful it would have marred the result too much for him.

Heading into the game Brendan Rodgers’s side were gunning for their first Premier League title, while under-fire David Moyes needed a result to keep the pressure off.

The contest all but sealed Moyes’s fate was he was sacked a few weeks later and, although Rodgers’s Reds ultimately saw the title slip from their grasp, the victory will live on in the memories of the Anfield faithful for years to come.

Gerrard got his name on the scoresheet as England completed a 5-0 rout over Andorra in a Euro 2008 qualifier at Old Trafford in 2006.

His Liverpool team-mate Peter Crouch put England in front after four minutes before Gerrard quickly added a second with a brilliant finish.

He delivered a classic strike after Ashley Cole’s long cross arrived at the far post for Gerrard to chest down and fire a powerful drive high into goal.

Gerrard later created England’s third with a superb right-flank cross that Jermain Defoe met with a crisp side-foot finish past the under-siege Koldo. 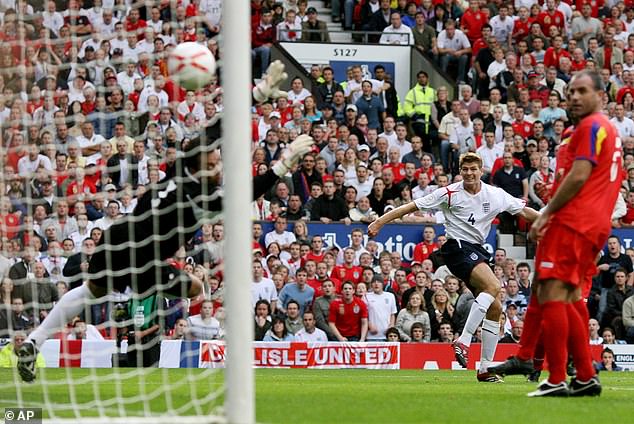 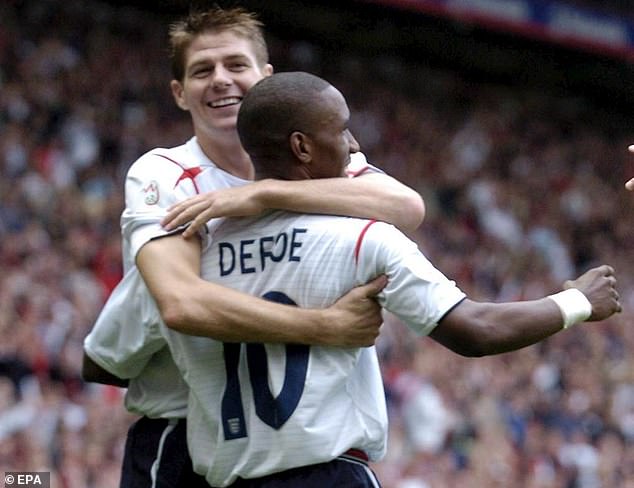 There was no finer setting for Kenny Dalglish’s first game back in charge of Liverpool as the Reds faced off with bitter rivals United in a gruelling third round FA Cup tie.

But the fairytale plot for the Reds legend’s return quickly turned into a nightmare.

Ryan Giggs opened the scoring early for United from the spot, leaving Liverpool with an uphill battle to get back into the game.

Gerrard quickly tried to rally his troops but his drive saw him race into a 50/50 ball with Michael Carrick.

He was unfairly deemed to have gone in two footed, despite getting plenty of the ball.

The challenge meant Gerrard was dismissed just 32 minutes into the cup clash at Old Trafford as Liverpool crashed out to a 1-0 defeat. 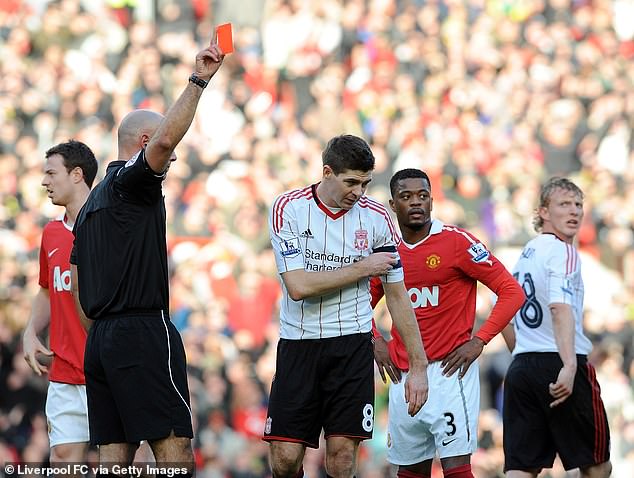 The Premier League visit to Old Trafford in April 2003 is a moment Gerrard will be more than keen to wipe from his memory.

The contest was over before it could really begin when Sami Hyypia was sent off within three minutes for a clumsy tackle on Ruud van Nistelrooy.

In the midst of the Sir Alex Ferguson era, to go to Old Trafford 11 versus 11 and gett  a result was tough enough but to do so with ten men for essentially the entire game was practically impossible. 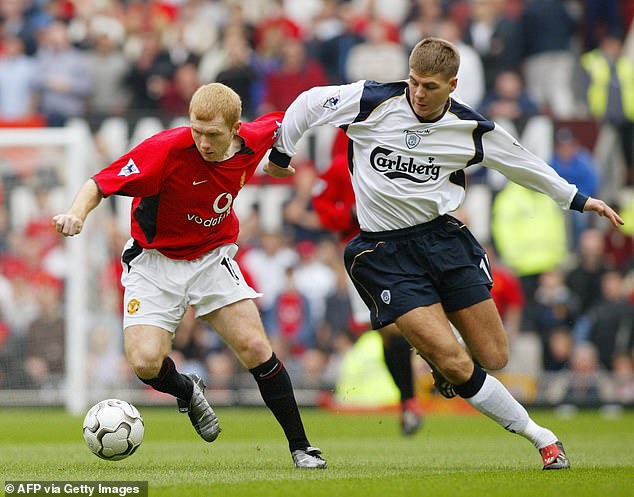 Liverpool had the chance to keep the pressure on United as second and third faced off in January 2006.

Heading into the final minute of the game, the Reds thought they had managed to hold United to a 0-0 draw to share the spoils from their trip down the East Lancs Road.

But Rio Ferdinand crushed Liverpool’s hopes as he leapt above a crowded penalty area to power a header past Jose Reina from a Giggs free-kick and snatch all three points. 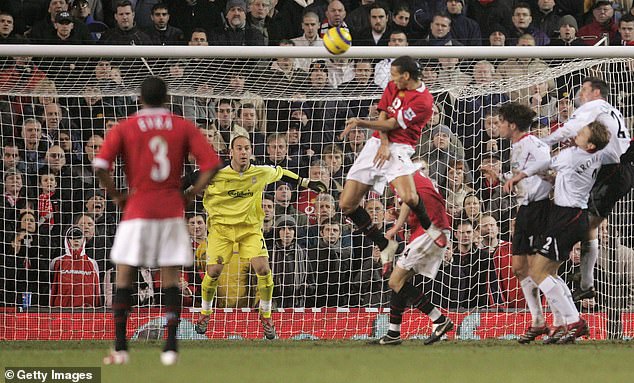 The last-gasp defeat was particularly galling as Liverpool had dominated the game but squandered chances to take the lead throughout the contest – none more unbelievable than Djibril Cisse’s lash over the bar in front of an open goal.

The result saw United pull four points clear of Liverpool in the league and eventually pip them to second place – behind runaway leaders Chelsea- by one point at the end of the season.