Cristiano Ronaldo cut a glum figure as he arrived at the club’s Carrington training base on Monday morning – less than 24 hours after being benched for Manchester United’s 6-3 drubbing at the hands of arch-rivals Man City.

United were thrashed by Pep Guardiola side at the Etihad on Sunday, with Erling Haaland and Phil Foden both grabbing hat-tricks in the emphatic win that has left Erik ten Hag and his players red-faced.

Ronaldo had to watch the mauling from the sidelines, leaving more questions to be asked about his future at the club, with Ten Hag instead opting to send on Anthony Martial to try and make a difference. 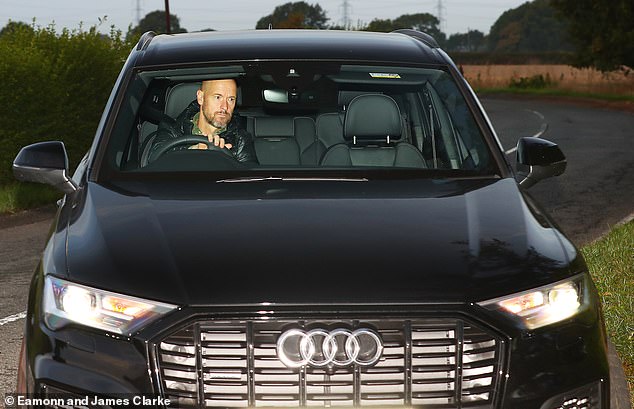 A stern-faced Ronaldo pulled up for training alongside his deflated-looking team-mates, with summer signing Antony one of the only players to give photographers the thumbs up when arriving at Carrington.

The decision to leave Ronaldo on the bench saw Roy Keane accuse Ten Hag of ‘disrespecting’ the Portuguese star, and insists his former club should have let him leave in the summer.

After the match, Ten Hag told reporters that the 37-year-old superstar remained unused ‘out of respect for his big career’, choosing not to elaborate further.

The Dutchman added: ‘The other thing was the advantage I could bring Martial, he needs the minutes but I don’t want to point it out like that.’ 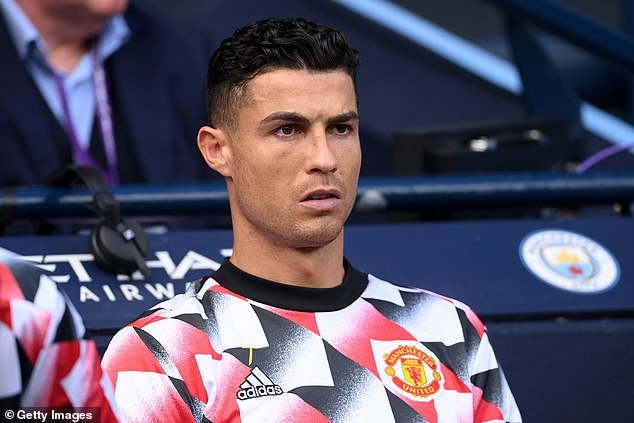 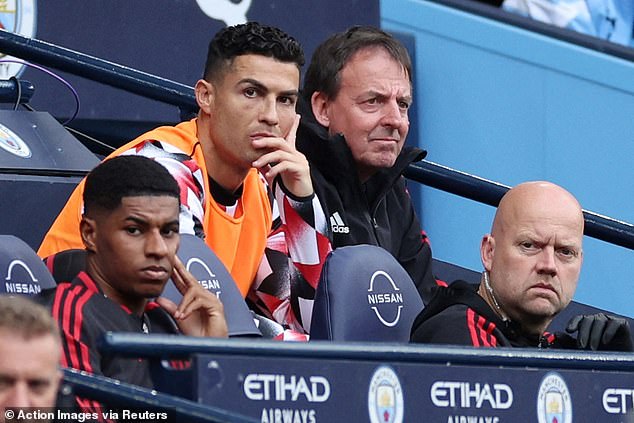 After the Manchester derby, Keane slammed the manager’s treatment of Ronaldo, who was one of only four unused substitutes including goalkeeper Tom Heaton.

Keane told Sky Sports:  ‘I think Man United are showing disrespect to Ronaldo. I think he should have been let go before the [closing] of the window.

‘If he’s sitting on the bench for United, week in, week out it’s just going to get uglier. I think United have shown nothing but disrespect to Ronaldo. 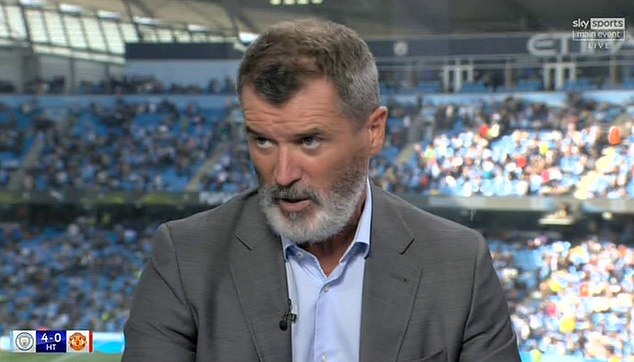 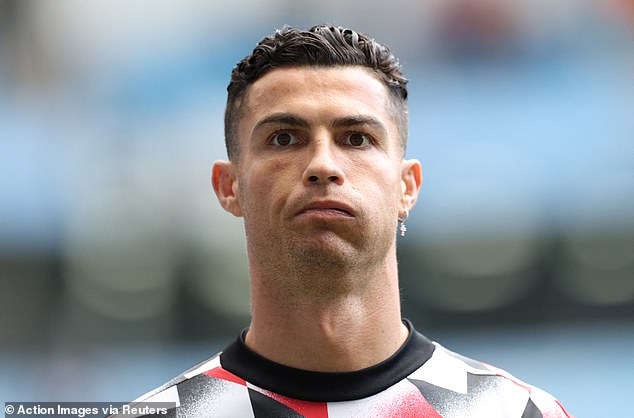 ‘They should have let him go when the opportunity came. He did have options, I know that for a fact.

‘But to hold onto Ronaldo to sit on the bench, I think is ridiculous for a player of his stature.’

The former Red Devils captain added: ‘So what if you’re 4-0 down. You look at his goal record, as good a chance of anyone of putting it in the back of the net.

‘People are obsessed with the pressing side of the game. You put the balls in the right areas, he’ll score goals.’

Keane was also asked whether trouble could be on the horizon at Old Trafford if Ronaldo keeps being omitted from the starting line-up. He admitted this could be the case. 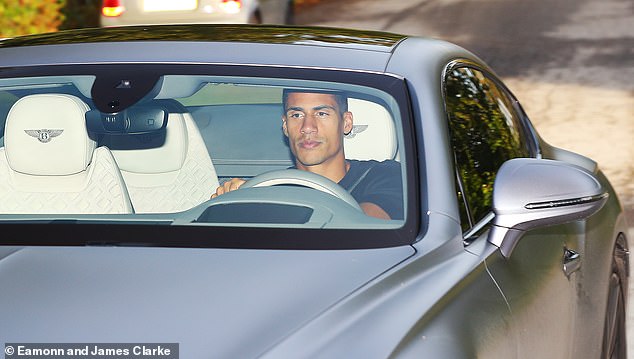 Raphael Varane, who was subbed off with an injury on Sunday, arrives at Carrington 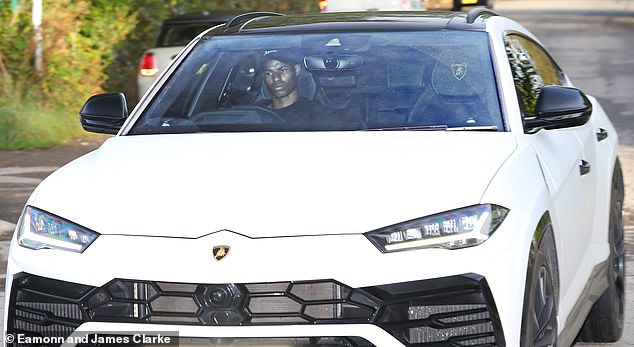 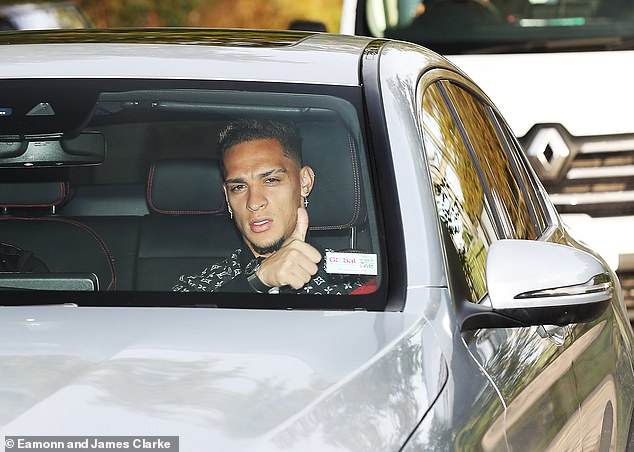 Keane continued: ‘I think he could be [a distraction in dressing room]. I think he will be if the season goes ugly.

‘But the great players and the top players want to play week in, week out. He did not come back to United to sit on the bench in a derby game.’ 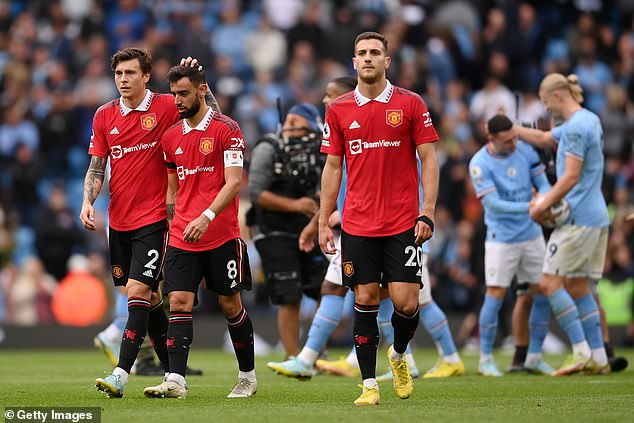 Ten Hag hauled his United players in for training last time they were hammered – a 4-1 defeat by Brentford – and looks set to address the issues with his squad on Monday during training.

When asked if his players would receive a similar punishment after they were hammered by Brentford, Ten Hag replied: ‘The punishment is a reason, they (Brentford) outrun us and we didn’t work hard enough, today is also mental but it’s a different mental issue.

‘It’s like belief, not always about punishment, of course, we have to criticise each other, so I didn’t get the message right to the players, the belief to the pitch, our way of playing. That’s disappointing, it’s good it happens against City and you get quite clear when you don’t bring it.’