A suspect allegedly escaped custody by putting a guard in a headlock and stealing the keys to his handcuffs.

Laurie Dodd, 44, allegedly made the bold escape while in custody at a Perth Hospital at 1pm on Saturday before going on the run once more, according to 7News.

On Thursday, Dodd was arrested after he allegedly led police on a car chase before fighting with officers and allegedly punching a police dog.

Police are desperately searching for Laurie Dodd, 44, after he allegedly ‘putt a guard in a headlock and stole the keys to his handcuffs’. He is pictured being arrested on Thursday

The dog bit him so severely on the arm that he was taken to Perth Hospital, where he managed to make his alleged ‘headlock’ escape.

Dodd was not guarded by police but by two custodial services officers from company Broadspectrum.

Prisoners are transported and guarded by Broadspectrum while they’re out of prison and in hospitals, under a contract with the WA Department of Justice. 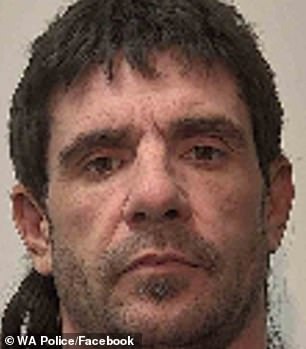 This is Dodd’s third escape from custody.

In 1999, he escaped the maximum-security Broome Regional prison.

He went on the run for two-and-a-half months, during which he was labelled ‘WA’s most wanted’.

Dodd and eight other prisoners escaped from the Supreme Court of Western Australia in 2004.

He managed to spend eight days on the run before being caught.

The escapee is described as 187cm tall, with a medium build, fair skin, black hair and a mullet haircut.

Dodd, who was charged with numerous offences, may have bandaged facial and arm injuries, and was last seen wearing a white t-shirt and either green or black boxer shorts.

He was spotted in Perth’s CBD and anyone who sees him should not approach but contact police on 131 444.