A hunt is on for a shirtless shopper who police say deliberately coughed on a supermarket worker during the coronavirus pandemic in New South Wales.

A 35-year-old woman was working at the checkout of a supermarket at Raymond Terrace north of Newcastle, helping customers with the new social distancing rules when the shirtless man and his female partner approached at 7.30pm on Tuesday.

The supermarket had new social distancing markers on the floor to help customers with the new coronavirus rules but the man allegedly approached the counter within the 1.5m allowed and was asked to move back.

An argument broke out before the man deliberately coughed on the female staff member, police said on Thursday.

The shirtless man was pictured on security camera footage wearing cream shorts and black thongs and holding his female partner by the hand.

‘This kind of dangerous behaviour needs to stop immediately. It’s potentially putting the lives of workers and their families at risk,’ he said on Thursday in a NSW Police statement.

‘This isn’t a time to practice poor hygiene habits,’ he said.

‘For a disgusting act like this, you could find yourself charged with common assault and jailed for up to two years.’

Police are investigating and have asked the public to help them find the man. 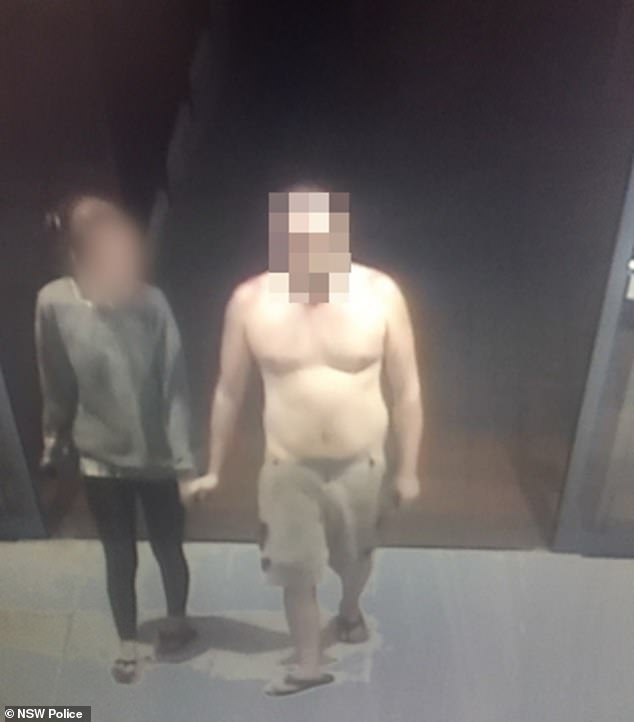 NSW Police have described the man as of Caucasian appearance with a shaved head and a goatee, about 170-180cm tall.

If anybody has information about the man they are urged to call Crime Stoppers on 1800 333 000.

NSW Police reminded the public on their website that severe penalties apply to the new coronavirus rules, called ministerial directions, that cover everything from travel to mass gathering and social distancing.

‘The Public Health Act 2010 (NSW) provides NSW Police with the power to enforce these orders,’ NSW Police said on their website.

‘It is an offence for a person to fail to comply with an order, and severe penalties apply.’

NSW Police said they can issue immediate fines of $1000 for people and $5000 for businesses if they break the ministerial directions.