Frightening note left on man’s windshield leads to a shocking discovery in his tyre- so would you have spotted what was wrong?

A driver was left stunned after finding a note had been left on his car warning him about an uninvited guest lurking in his wheel.

David Mantellini had been shopping at Coles in Manly, on Sydney’s northern beaches, when he returned to his vehicle on Monday.

Some 50 people were gathered around the car and a note had been left securely under his windscreen wiper.

‘Hi car owner, there’s a python in your front left wheel,’ it read. ‘The jewellers opposite are trying to contact wildlife rescue.’

Mr Mantellini checked the tyre to find the reptile poking out from the hubcap.

The heart-stopping discovery could not have come at a worse time for Mr Mantelli who had just welcomed his second daughter Olivia five days earlier.

His wife Nicola had just been discharged from hospital and the couple intended on introducing the newborn to her sister Luna that day.

‘He was faced with the dilemma of waiting for animal rescue or heading off to collect our daughter,’ Ms Mantellini told 9News.

‘Quick-thinking locals helped him out, with the nearby sushi restaurant taking the car key until police arrived.

‘Another lady bundled our car seat into her car so the toddler pick-up and new baby intro could go ahead as planned.’

The snake was collected by wildlife experts before it was released at North Head. 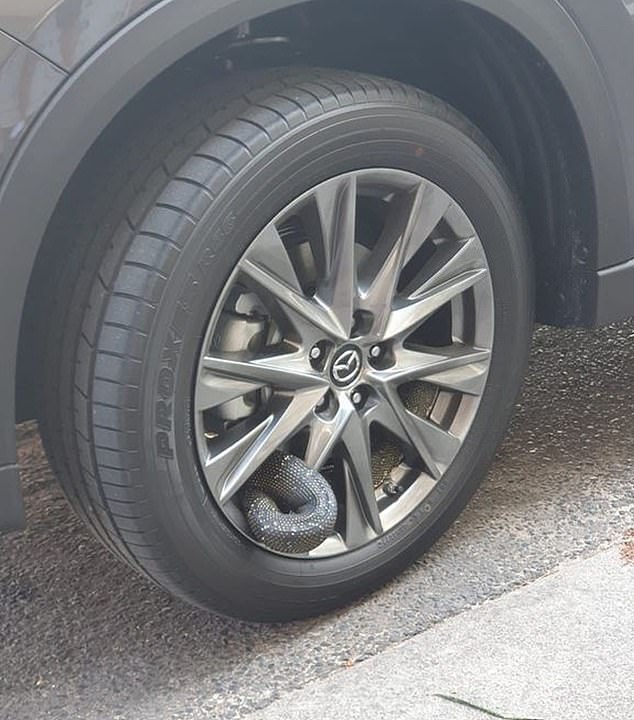