The fallout from the Manly pride jersey seven could extend deep into the 2023 season after their absence led to a crucial loss that might have derailed the Sea Eagles’ NRL finals ambitions.

It has also been reported that a number of other players declined the opportunity to take their place in the squad, leaving Manly severely undermanned.

Their actions have caused a divide in the playing groups, with a number of footballers reportedly furious after the seven stood themselves down from such a crucial game.

The players have already started meetings to address the divides, with News Corp reporting that the deeply religious Aloiai had met with Jake Trbojevic, Lachlan Croker and a fourth player on Sunday to talk it out.

The entire playing group has also met at the club’s Centre of Excellence to try and understand each other’s standpoints.

While the players now claim to be a united group, the cracks are still there. 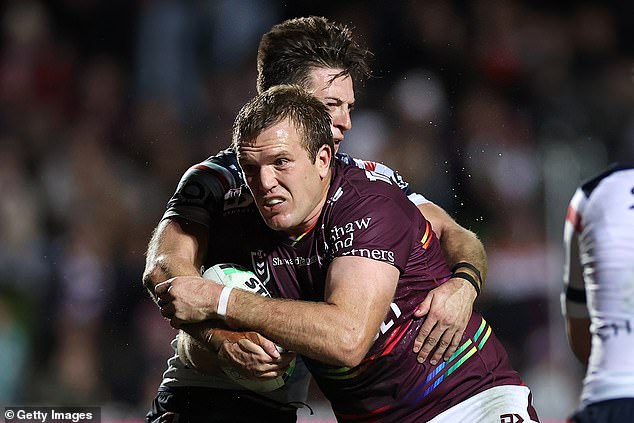 Some players have spoken to the coaching staff about their grievances, some of the seven have reportedly bristled at claims they will wear the pride jersey next season and many feel the issues will continue to be a problem long into 2023 – especially if Manly miss the finals.

The Daily Telegraph’s Phil Rothfield said on Big Sports Breakfast that a professional mediator had been brought in to help deliver an ‘uneasy truce’.

‘The club brought in a professional mediator to get the group of players to get together to try and get a sympathetic understanding from both sides,’ he said.

‘I don’t think they’re ever going to agree on the fact that the players did the right thing by withdrawing from the match last week but what they want is for the players who did play to get a better understanding of what and why they did it.

‘That’s why everything was put on the table yesterday and there were discussions.

‘I was told late last week the risk amongst the players in the team was basically it was not reversible, it was quite deep, and the boys who did play and played very bravely against the Roosters could not comprehend why their teammates took such drastic actions.

‘I think after they got together yesterday there is an understanding, I still think there’s a very long way to go before it is completely sorted out to a satisfactory position where they’re prepared to like all NRL clubs to have full time camaraderie and strengths and spirit.

‘I think you can call it an uneasy truce between the players.’ 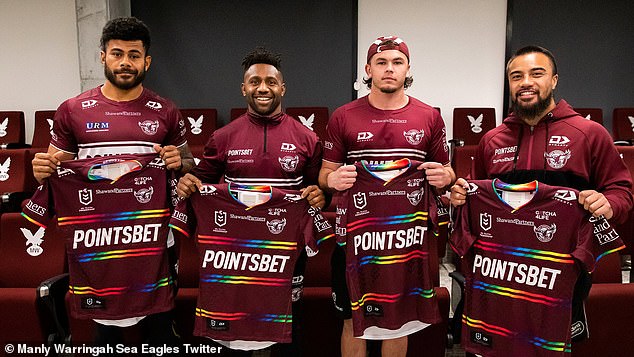 Club chairman and co-owner Scott Penn told The Sports Breakfast Weekend radio show he was aware of the player meetings.

‘I’m certainly aware the playing group is getting together,’ Penn said.

‘It’s really important everyone gets together and just talks it through. There needs to be a ‘clear-the-air’ session which is perfectly normal in these circumstances.’

‘There’s not a deep divide which has been reported but I think there is some frustration in terms of the way all this played out,’ Penn said. 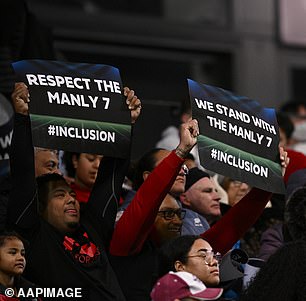 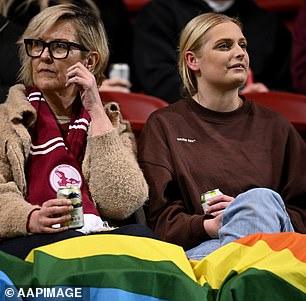 Manly fans overwhelmingly supported the pride jersey initiative at the game against the Roosters, but some supporters stuck up for the boycotting players, too

Penn suggested the adversity would unite the group, instead of dividing it, while re-affirming that mistakes had been made.

‘I met with six of the seven – Josh (Aloiai) was injured and wasn’t training but I spoke to him a little bit later. They are very determined and they were put in a difficult position but there are absolutely no hard feelings at all,’ he said.

‘As I discussed with them at the time, their focus now is on Parramatta [this week]. 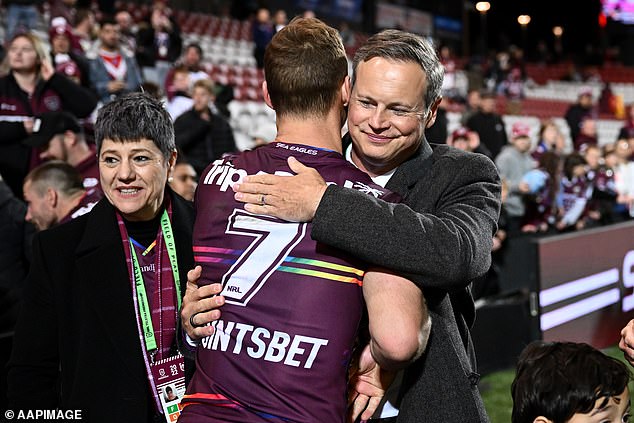 ‘The seven were very clear in their view and religious beliefs and we totally respected that. They have copped it from certain circles and that is unfortunate because we didn’t ever want to put them in that position.

‘We will see a very cohesive team for the next five weeks. It was an emotional week and the circumstances put everyone in a difficult position.’

‘It’s been deemed that management has got this wrong but we were really celebrating everyone in league. That was our intent. It was never about isolating anyone in the community.’