Manny Pacquiao was beaten by Cuban fighter Yordenis Ugas via an unanimous points decision in what could be the Filipino legend’s final boxing match of his career.

Ugas seized his opportunity as the late injury replacement for Errol Spence Jr., frustrating Pacquiao throughout the night in their WBA ‘super’ middleweight title fight.

The 35-year-old Cuban threw far fewer punches than Pacquiao, but his blows were more precise and more effective. Pacquiao struggled to get inside on Ugas effective jab, while the latter landed his right hand to increasing effect in the final rounds. Two judges scored it 116-112 for Ugás, and a third had it 115-113. 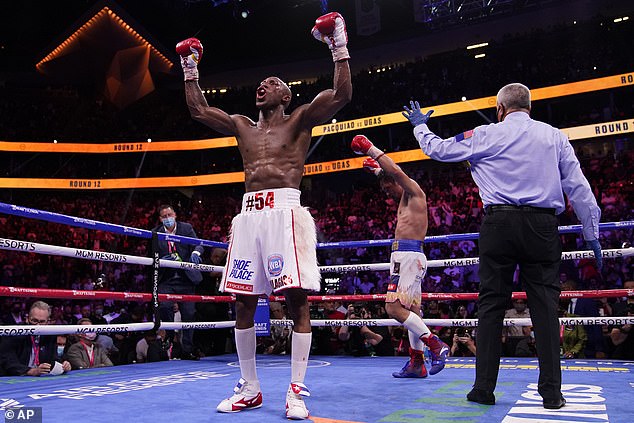 After an unimpressive performance in his return from the longest layoff of his quarter-century in professional boxing, Pacquiao said he hasn’t decided whether he will fight again.

He also wouldn’t confirm whether he will enter the Philippines´ presidential race, as is widely expected. He intends to make an announcement next month.

The victory was the culmination of a lengthy journey for Ugas, who defected from Cuba two years after winning a bronze medal in the Beijing Olympics. The 30-year-old quit boxing for two years midway through the last decade, but recovered his career and capitalized on this unexpected shot against one of the greatest fighters of this era, earning his 12th victory in 13 fights. 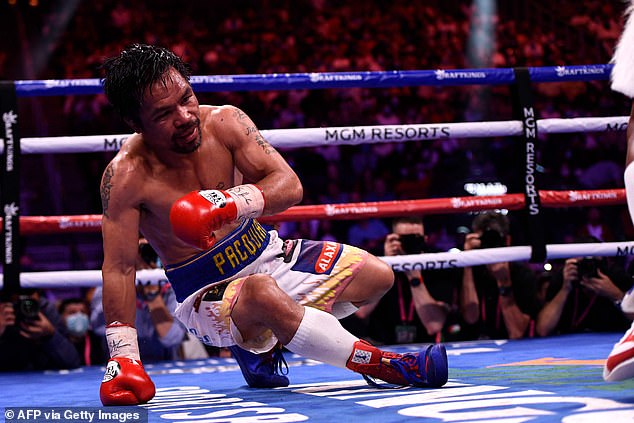 ‘He’s a great competitor, but I came in here to show I am the champion of the WBA,’ Ugas said through a translator. ‘(I have) a lot of respect for him, but I won this fight.’

Ugas got this opportunity only last week when Spence was forced to drop out after discovering he had a torn retina during a pre-fight physical. The Cuban had been booked on the undercard, but he seized the opportunity for the spotlight and payday that had been just out of reach since he left Cuba on a small boat bound for Mexico 11 years ago.

Las Vegas’ T-Mobile Arena appeared to be essentially sold out despite the late opponent change, and the crowd of 17,438 was vocally behind its Filipino hero. Even after a lengthy layoff in the last stages of his career, Pacquiao remains a surefire draw and a bankable star in a sport lacking both at its highest levels. 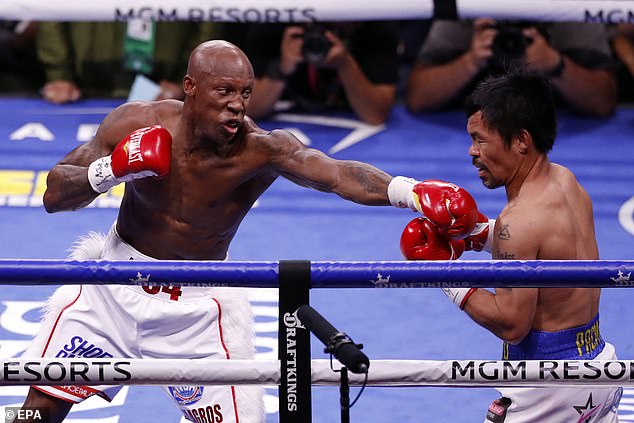 Pacquiao (right), 42, came out the blocks firing but Ugas began to land jabs after round two

Ugas had a clear game plan despite the short notice, working hard in the early rounds with an effective jab and body shots. Pacquiao was more aggressive and occasionally got the crowd to its feet with combinations, but he didn’t immediately find a consistent way to get inside the jab.

Ugas’ confidence grew in the middle rounds, and he responded to some action at the seventh-round bell with a defiant shimmy-shake of his shoulders in Pacquiao´s direction.

Pacquiao threw roughly twice as many punches as Ugas for long stretches, but they landed about the same number as Ugas showed off his defense and precision against Pacquiao´s activity.

Pacquiao caught Ugas with a combination in the 10th round and knocked him back as the crowd rose in excitement, but the Cuban recovered and rallied with big shots.