Man’s bowel became so ‘filled with faeces’ it BURST

A 24-year-old man’s bowel became so full with faeces it burst – causing his organs to start shutting down.

The unnamed man, thought to be from London, went to A&E after enduring stomach pain and diarrhoea for a week.

Doctors were shocked to discover his ‘megarectum’ dilated to seven inches (18cm) and the last part of his colon was ‘filled with faeces’.

The unnamed man, thought to be from London, went to A&E after enduring stomach pain and diarrhoea for a week (pictured: scan shows a build-up of faeces in black in his sigmoid colon)

Records showed the autistic patient had been admitted to hospital for constipation numerous times since 2014.

A physical examination showed that he had a ‘tender, distended abdomen with quiet bowel sounds’.

Medics then arranged a CT scan for the patient. It showed his rectum had dilated and sigmoid colon was filled with faeces.

Dr Alexandros Apostolopoulos and colleagues gave the man laxatives and tried to give him an enema – but he refused.

He complained his stomach pain had worsened two days later, and doctors had another look at his condition.

They found he had peritonitis – a potentially life-threatening infection – and reduced consciousness level. 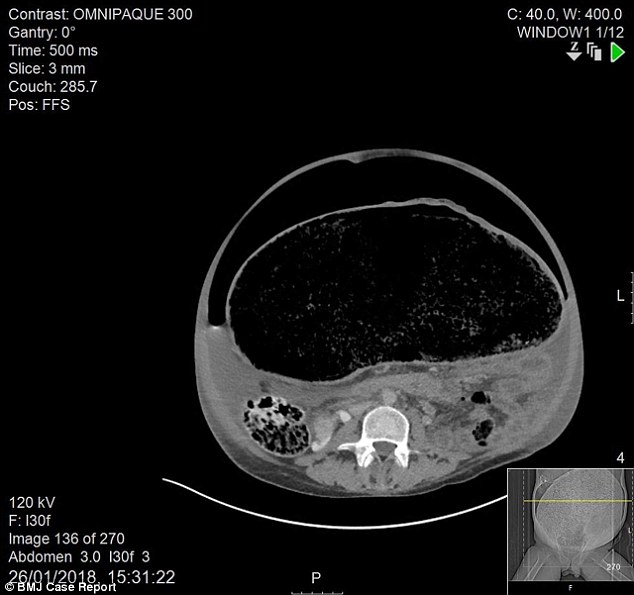 A physical examination showed that he had a ‘tender, distended abdomen with quiet bowel sounds’ (pictured: his bowel in the large black mass)

Megarectum is the medical term for an enlarged rectum, which usually occurs as the result of severe constipation.

The condition is usually treated with laxative medication, although suppositories (medication inserted into the anus) and mini enemas (where medicine in fluid form is injected through your anus) may sometimes be used.

Megarectum can stop people from wanting to go the toilet, as patients lack the sensation. It can also put pressure on the bladder, causing difficulty urinating.

Further tests then revealed his kidneys were starting to fail and his blood was quickly becoming acidic.

Dr Apostolopoulos and his team organised a second CT scan for the patient, which found a ‘substantial perforation’ of his sigmoid colon.

He was rushed to intensive care before undergoing a Hartmann procedure, surgery to fix the tear.

Writing in the journal, doctors said: ‘This patient had chronic, idiopathic megacolon and megarectum.

‘Patients with this condition report recurrent episodes of constipation, abdominal pain, distension and bloating starting in childhood or adolescence.